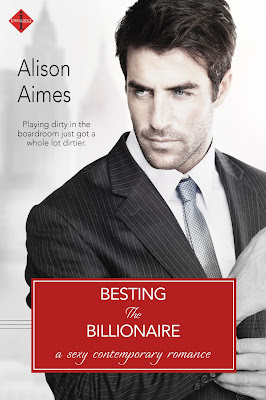 Playing dirty in the boardroom just got a whole lot dirtier.

Billionaire Alexander Kazankov always wins. But he didn’t count on high-heeled, drop-dead sexy Lily Bennett getting in the way of his latest deal. She’s a distraction he doesn’t need, not when he’s so close to making things right for his family.


Lily may walk and talk like a Southern piece of fluff, but she’s been underestimated before. She's determined to succeed—and no entitled, arrogant asshole, especially the too-gorgeous-for-his-own-good-kind, is going to get in her way.

Oil meet water. Gasoline meet spark. It’s all out war as these two enemies go toe-to-toe in an ugly, take no prisoners battle to prove they’re the right choice to be CEO of the same company. All too soon playing dirty in the boardroom leads to playing even dirtier in the dark. It’s destined to end in personal and professional disaster. So why can’t they stop?

Excerpt from Besting the Billionaire:

His adversary spoke through gritted teeth.  “I’m not afraid of you.”

Unwelcome lust reared its head, raked its nails across his skin, and clawed at his chest and back. Just the way he wanted this woman touching him.

He shook his head to expel the image. “You should be.”

“Yesterday, you intruded where you didn’t belong. I returned the favor. We’re even.”

“Mishka, I don’t do even.” He stepped closer. “I don’t do ties. I don’t give out medals for participating. I’m in this to win.”

“I wouldn’t order new office furniture yet.” Her hold on her briefcase had gone knuckle-white. “I’ve asked to speak to the board as well. It’s going to be amazing.”

“I would expect no less.”

“Really?” Cynicism dripped from every syllable.

“What about the whole nails and spa thing?”

“I’m a quick study. Able to admit a mistake when I make one.”

“What are you up to?” Her eyes narrowed. “Is this some sort of trick negotiating tactic?”

“I’m a jerk, yes, but I’m the brutally truthful kind. I’m willing to admit you’re turning out to be a more impressive adversary than I initially imagined.”

“I…” She swallowed hard, that kitten tongue darting out to lick those lips, and for the first time, he saw a flash of vulnerability in her gorgeous eyes. It made his chest go tight. Because in that small, revealing gesture it became clear that the always cool, classy, and poised Ms. Bennett was far less confident than she appeared. Worse, it mattered to her what others thought. A very dangerous weakness to have in their line of work.

So why the hell was he thinking of ways to toughen her up rather than exploiting it?

“I appreciate you saying that.” She cleared her throat, her gaze flickering away.

Ah, hell. The urge to haul her close and murmur God knows what in her ear until that vulnerable look went away surged through his blood with painful intensity.

“This thing between us is going to be a problem.” The words came out sharper than intended.

Her spine snapped straight, that soft look disappearing fast. “There is no thing between us.”

About the Author:
Alison Aimes is the award-winning author of the sizzling contemporary romance Billionaire Bad Boys series and the sci-fi romance series the Condemned. A romance fanatic with a PhD in Modern history, she’s an all-over-the-map kind of woman with a love for dramatic stories and great books, no matter the era. Now, she’s creating her own stories full of intrigue and passion, but always with a happy-ever-after ending. She lives in Maryland with her husband, two kids, and her dog. When not in front of the computer, she can be found hanging with family and friends, hiking, trying to turn herself into a pretzel through yoga, or, last but not least, sitting on the couch imagining her characters’ next great adventures.