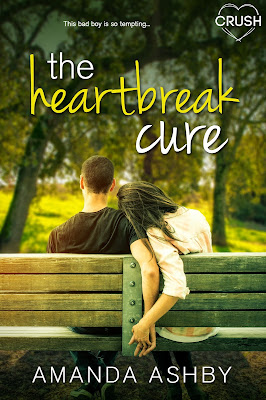 The Heartbreak Cure
How to get over a heartbreak:

Step one: Eat your body weight in brownies.

Step two: Throw yourself into your dreams of becoming a famous writer.

Step three: Beg your (hottie) ex-neighbor to act as your fake boyfriend.

After being dumped and humiliated over the summer, Cat Turner does what any sane girl would do. She asks bad boy Alex Locke to be her fake boyfriend and show the world (and her editor at the school newspaper) that she's fine. Problem is, the more time she spends with Alex, the more she risks getting her heart broken. For real this time.

Disclaimer: This Entangled Teen Crush book contains a swoony bad boy who will melt your heart, brownies, and witty banter. One, two, or all three might prove addictive…
Buylinks: https://entangledpublishing.com/the-heartbreak-cure.html

Excerpt from The Heartbreak Cure:
He grabbed a shower and was just toweling off his hair when there was a knock at the door. He frowned as he hastily dragged his T-shirt on and stepped into his jeans.
It would be Pete, the other mechanic, probably kicked out again by his girlfriend and wanting to bunk on Alex’s couch. He yanked the door open, and his mouth dropped.
Cat.
She was wearing her favorite band T-shirt tied in at her waist to show off just a hint of stomach. She looked cute as all hell. His skin prickled, and his eyes drifted to her full lips, slick with some kind of pale gloss. Edible.
Oh, crap.
“What are you doing here?” The words came out harsher than he intended, and he watched the color rise in her cheeks. Smooth.
“Hey,” she said as she clutched at her backpack. Her hair was hanging down around her shoulders, and her dark eyes were shining. “Your hair’s wet.”
“Shower,” he said before wincing. He was really mastering the inane today. 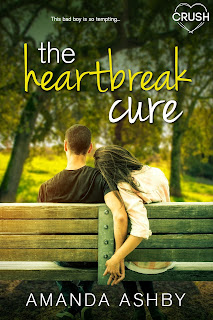 “Oh.” She looked down to her boots and then peered up from between her lashes. “Is it weird I’m here?”
Weird? Dangerous? Brain melting? Tough one to call. “Um, no I guess it’s fine. Is everything okay? It’s not Bennet?”
“What?” Her face wrinkled before understanding seemed to dawn. “No, nothing like that. It’s good news, and I wanted to tell you, but then it seemed dumb to call when I had to run an errand and was walking straight past here. But then when I knocked, I suddenly wondered if it—”
“Might be weird,” he finished. She was still on the top stair while he clutched the door in some kind of stand-off. “Do you want to come in?”
“Sure. I mean, yeah,” she said, though her mouth was set in an uncertain line as he stepped back. He caught her scent—it was sunshine and oak trees and safety.
And it could lead directly to trouble.
“Cool.” He took another step back as she swept past and scanned the room, no doubt taking in the wallpaper, which was an explosion of brown swirls. It might’ve worked in some hipster café, but in a beat-up old apartment it was headache inducing.
“I’m not sure what I imagined your place would be like, but this wasn’t it.” She looked around.
“Yeah, well, I’m in the middle of changing decorators. You know how tough it can be.”
“The pain is real, my friend.” She grinned as she walked over to the old couch.

About Amanda Ashby:
Amanda Ashby was born in Australia but now lives in New Zealand where she writes romance, young adult and middle grade books. She also works in a library, owns far too many vintage tablecloths and likes to delight her family by constantly rearranging the furniture.
She has a degree in English and Journalism from the University of Queensland and is married with two children. Her debut book was nominated for a Romantic Times Reviewers Choice award, and her first young adult book was listed by the New York Public Libraryʼs Stuff for the Teen Age.  Because she’s mysterious she also writes middle grade books under the name, Catherine Holt and hopes that all this writing won’t interfere with her Netflix schedule.
Author Links:
Author Website: amandaashby.com
Author Facebook: https://www.facebook.com/amanda.ashby.501
Author Instagram: https://www.instagram.com/authoramandaashby/
Author Pinterest: https://www.pinterest.com.au/amandaashby501/
Author Goodreads: https://www.goodreads.com/author/show/777375.Amanda_Ashby
Newsletter Link: https://www.subscribepage.com/u2r9s8