Congratulations to "Ada H.", the winner in Cate's giveaway. Thank you to all who participated!

One of my favorite things to do with my writing is to set up situations where neither character is 100% right, neither is 100% wrong, but both are 100% furious at the other! In The Billionaire’s Forever Family, Cassidy does what she thinks is best in order to protect her beloved niece, but her niece’s newly discovered father doesn’t appreciate being treated as a threat: 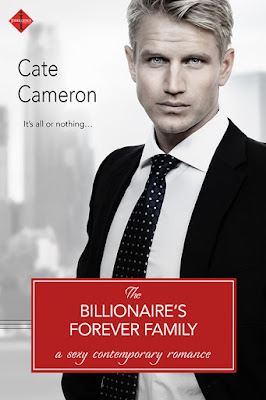 As soon as she had the door locked and the sign flipped to “Closed”, Cassidy whirled for her phone.
“Who are you calling?” Connelly asked from just the other side of the counter.
“Who do you think?” Cassidy snarled. This arrogant son-of-a-bitch, cruising in and acting like— “Debbie? It’s Cassidy Frost. Can you pull Emily out of class, please? Right away? I’m going to come by and pick her up. I’ll meet her at the front doors in five minutes. ” The school secretary agreed, and Cassidy dropped the phone and reached for her purse.
“What the hell are you doing?” Connelly demanded. “You can’t hide her from me.”
“Hide her?” Cassidy whirled toward him. “God, I wish I could. I wish I could run away with her and keep her away from the crazy asshole who thinks he has the right to pee on his territory and make public claims in front of gossip queens! I wish I could protect her from a man who doesn’t care if his own daughter finds out about him from a nosy neighbor instead of having the chance to deal with the situation on her own terms at her own speed.” She was at the door now and waved her arm at him. “Get out. I have to get to the school before Emily hears about this from some classmate with a cellphone.”
“I should follow you—” he started as he brushed past her out of the diner.
“You should go to hell,” she replied, and yanked the door shut behind her. This mess was partly her fault. She’d started it. But this asshole had made everything much, much worse. She needed to get to Emily and start trying to make things better. 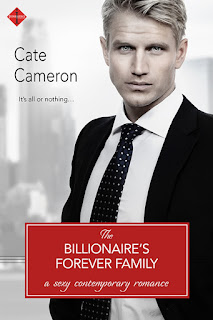 THE BILLIONAIRE'S FOREVER FAMILY
When Cassie Frost reaches out to the biological father of the niece she’s raising, she doesn’t expect him to send in the lawyers. Emily is all the family Cassie has left, and she’ll do whatever it takes to keep her niece. But as the owner of a struggling dinner going up against a billionaire, the odds aren’t in Cassie’s favor.When billionaire Will Connelly learns he has a daughter, he’s determined to have a place in her life—even if that means going head-to-head with her proud, stubborn, and irresistible aunt. It’s clear they both want what’s best for Emily, but Will’s not used to being told he’s wrong, and Cassie doesn’t seem to have a problem letting him know whenever she thinks he’s messing up.Will’s sure they can have it all, even if Cassie is determined to stand on her own two feet instead of being swept off them.