Okay, before anyone asks, no there are no peas in this breakfast recipe. I know a lot of casserole recipes call for peas, this one does not. Peas are for lunch or dinner, not for breakfast. Green things should never be served at breakfast. Memorize that. Okay, one exception: green frosting on some donuts. Okay, one more, green pepper in breakfast burritos…and this casserole (if you want them!). That is the limit, people, I swear!

So, over the weekend, we had our first of several extended-family Christmas celebrations - 12 people, 2 days, 1 house...lots of food and fun were had. But one staple at every holiday gathering (at least with this specific group of people!) is a breakfast casserole. Because 1) it's easy to make ahead of time and 2) we all love it. This weekend was no different, but as we were talking and laughing and passing around the casserole dishes for seconds, I thought this would be the perfect recipe to share with you during the release of Christmas in a Small Town...because who doesn't need a fast, easy breakfast idea during the holidays?

6-8 eggs, beaten
1 package Ore Ida hash browns - I like the circle kind, not the shredded...but this time could only find the shredded. It was just as good. Who knew?
12 oz Sharp Cheddar Cheese (you could also use Velveeta, what's any casserole without Velveeta?!?)
16 oz Farmland Cubed Ham (if you have time and/or left overs and want to chunk your own ham, even better. You could also substitute sausage or bacon or any other breakfast meat)

How you do it:

Coat the bottom of a 13X9 baking dish (I use Pyrex, do as you will) with Pam. Put the hashbrowns in a layer on the bottom, top that with the ham, then eggs and if you've chosen to include the onion and green pepper, throw that in now. Then top with the cheese. Bake at 350 for 45-60 minutes. **Note: This recipe will serve 6-8 people, depending on the level of hunger. And love of eggs, cheesy goodness and ham.

That's it - I like to make this the night before, that way the morning of the breakfast, I just need to pre-heat the oven and get back to the chatter. Enjoy! 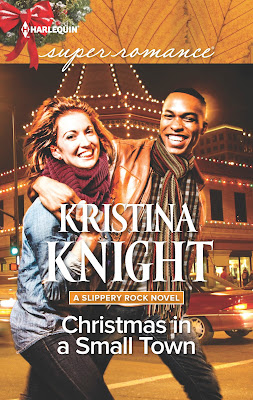 CHRISTMAS IN A SMALL TOWN
Running out on her wedding was the best decision ever!
A cheating fiancé sends Camden Harris fleeing to her grandparents’ home in Missouri. When her ex follows, determined to win her back, Camden makes a deal with neighbor Levi Walters: they’ll pretend to be in love and she’ll support his plan to buy her grandparents’ land.

The boy from her childhood has grown up into an impressive man. His charm, good looks and sweet gestures make it difficult for Camden to remember this is fake. And Levi’s kisses only confuse her more.

Excerpt
“It’s a nice-looking dress, though.”

“I find that hard to believe. You wear it too well.”

Because she’d been trained to wear it well. Her mother had started her on the pageant circuit when she was nine, and after her father died, the pageants had become almost weekly occurrences. Still, having a stranger comment on her appearance was nice. Maybe a little stalkery, but nice. “Yeah, well, it’s not like it takes a special set of skills to wear designer clothing.”

Okay, that upped the stalker level a little too high. She was not going to let some cowboy in a small town take her to his trailer just because she’d walked out on her old life.
“I’m going to finish this glass of wine and be on my way. You can scurry back over to your buddies now and tell them what a hateful witch I am.”

“You don’t seem all that hateful. Maybe a little sad. But not hateful.” His voice was kind, kinder than she probably deserved after walking away from everything and everyone the way she had done. But she still wasn’t letting a stranger talk her into bed. No matter how sexy his voice sounded in the darkened bar. “You’re wearing a ring you didn’t pick out, and a dress that isn’t your style. Seems to me like this has not been your day.”

“Try lifetime,” she said and twirled the stem of the wineglass between her fingers. And she was not going to keep talking to a perfect stranger about her life. She was not feeling like herself, but she wasn’t completely desperate.

“How much do I owe you?” she asked Merle, who was looking from Camden to the man at the bar and back again.

“I pay my own bills,” Camden said and turned to look at the man standing beside her.

He was tall, built like a football player. His skin was a rich brown, and there were golden flecks in his brown eyes.

And she knew him.

He was taller than she remembered. His shoulders wider. His voice deeper. But the laughter in the gaze was the same, as was the crooked tilt to his mouth. Camden clapped her hand over her mouth. Oh, god, she wanted to sink through the floor of the bar.

Of all the bars, in all the world, why did she have to walk into Levi Walters’s?