Congratulations to "Carrie G.", the winner in Season's giveaway. Thank you to all who participated!

I write flawed characters. They are humans who—in my mind—have experienced a life with ups and downs, and often some sidetracks too. Those experiences make them who they are, determine decisions they make, and how hard they fall in love.

When you’re building someone from the ground up, it’s easy to make them good-looking, charming, great in bed, and likeable. The challenge is to give them depth and conflict, to make them face challenges and grow. That is the heart of a good romance, two flawed people evolving to be better for each other.

Scrolling through my social media feed one day, I stumbled across a viral video. It was Neil Hilborn performing his spoken word poem titled “OCD.” Chills ran down my entire body and tears filled my eyes. I must have watched it twenty times. This man’s ability to express such passion and heartache about being in a relationship while having OCD moved me. In fact, it inspired my next novel.

Chaos and Control was born from the notion that everyone deserves love—no matter your shape, size, color, financial worth, or mental health disorder. Wren Hart is chaos. Her wild ways, despite being a preacher’s kid, have always been the talk of the town. After high school, she left out on her own to explore the world. Now that she’s back, she realizes nothing has changed. Except for the smoking hot new guy.

Preston is happy in his routine and order. Small town life has been good to him, allowing anonymity and personal space. Wren represents everything he doesn’t want, yet he finds himself drawn to her. While this is a tale of opposites attracting, it’s also a tale of two people who didn’t know they needed each other. Wren wants to avoid getting nailed down to small-town America and Preston thinks he’s unworthy of love. It takes a whole village to convince them otherwise. 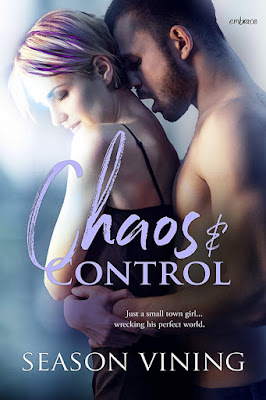 When Wren Hart returns to her sleepy little Midwest town after years on the road, she finds the last thing she’d ever expect—a reason to stay. And that reason has a hard body, a knowledge of vinyl, and a crooked smile that sends her reeling.

Preston is a gorgeous, mysterious man, whose life is ruled by routine and order. Yet somehow, he finds Wren and her wild ways captivating. While their relationship grows in a delicate dance of chaos and control, the danger Wren thought she’d left behind during her travels is inching ever closer…and just may destroy them both.

Excerpt:
“So, Preston-who-eats-here-twice-a-week, are you ever going to tell me what you’re writing in that notebook?”

“Thoughts,” he finally says. “A therapy of sorts.”

His forehead wrinkles, and his lips pull down on each side. “No. It’s poetry. I write poetry.”

“Will you let me read it someday?”

“No,” he answers, shaking his head.

He gives me no excuse. It stings a little. Just when I think I’ve gotten through that wall he’s built around himself, I’m reminded that Preston only allows me to see pieces of him.

“So, I got a job at The Haystack,” I say as Preston switches out his plates. “I start tonight.”

“That’s good. Maybe you’ll stop hanging out at Vinyl so much.”

I slap my hand over my heart and mouth “ouch” while he gives me that lopsided smirk.

“I don’t think you mind me hanging out there at all,” I say, calling his bluff. I lick my lips and celebrate internally when his eyes flick down to them.

“I’ve never met anyone like you. You’re so forward, so blunt,” he says in awe, as if he’s offended.

“It’s easy for me. Like breathing. I don’t know any other way to be.”

“It drives me crazy,” Preston says. I open my mouth to respond, but he stops me by holding up one finger. “But I also find it so damn sexy.”

I try to process what he’s said and form a reply, but nothing comes. He watches me, something new in his eyes that drives me wild. I focus on my salad and stab at cherry tomatoes with a little too much force.

“Very interesting, Wren.” The sound of my name sends me into a tailspin, and I hesitantly meet his gaze over a table, salad bowl, and two empty plates.

“Looks like you can’t handle a taste of your own medicine.”

I put down my fork and wipe my mouth with a napkin. With both hands on the table’s edge, I lean closer to him. Preston stays pressed against the back of the booth.

“That may be true. But I think you’d love to find out how good my medicine can be.”

Author bio:
Season Vining is a romance author, penning adventurous and sexy stories with a dash of humor. She grew up in southern Louisiana where food, culture, and family mean everything. She has lived in Houston, San Diego, and NYC—all of them providing colorful experiences and tons of writing material. She is a graphic designer by day, a complete font snob, and enjoys all forms of art. Her obsessions include live music, tattooed bad boys, vintage cars, and people who know the difference between their, there, and they’re.