Congratulations to "Dana G.", the winner in Stefanie's giveaway. Thank you to all who participated! 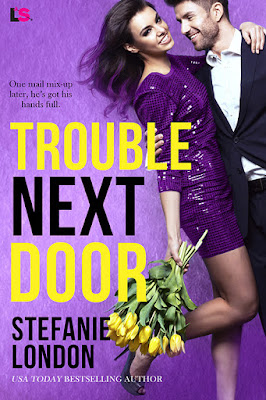 Mail mishaps. We’ve all had them. Items that arrive damaged, boxes that have been opened by someone else…or mail that doesn’t turn up at all.

The idea for Trouble Next Door started with a single thought: what if you ordered something online that you didn’t want anyone to see and it accidentally went to the wrong address? In the case of this story it’s a box of adult toys.

Totally embarrassing, right? I know, we authors are so mean to our characters. It’s one of the perks of the job. This scene takes place right after McKenna discovers that she accidentally typed the wrong address for her order and that the parcel has not only been delivered to her apartment building, but that it’s been picked up by the guy who lives in the apartment she accidentally sent the box to. She has no choice but to go to his front door, red-faced, and hope that he hasn’t opened it.

But what would be too easy, wouldn’t it? Here’s Beckett and McKenna right after she realizes that he has opened “the box of shame” as she comes to call it…

“Oh God.” McKenna dropped her head into her hands. “Can this day get any worse?”
How could she possible have had her box of sex toys delivered to the wrong address?
She forced herself to lower her hands and make eye contact. Now was not the time to regress to toddler-style denial. Did he have to be so good looking? That really was making it much harder.
Beckett towered over her and he was built like an athlete. Strong and solid, lean.  He had wavy dark blond hair that was cut short and neat, the hint of stubble just breaking through along his jaw.
He looked like someone her mother would have picked out for, and yet her body never failed to sing when he was around. And no church hymns, either. Oh no.
Right now they were singing some Marvin Gaye-level shit.
“I’m not judging you,” he said. His expression was difficult to read, but it didn’t sound like he was lying.
“You can, it’s a pretty ridiculous scenario.” Her gaze darted to where her package sat on his expensive-looking dining table. The corner of a pink sex toy box poked out of the top. “Have a laugh when your girlfriend gets home. I promise, I won’t be offended.”
“That won’t happen.” He shook his head, a crease forming between his brows.
McKenna snorted. “You’re a better person than me, then.”
“I meant that she won’t be coming home.”
“Oh.” She wasn’t sure what else to say, but Beckett was staring at her as though he expected something. A reaction, or maybe some solidarity. “Uh, is it permanent?”
He shook his head, looking every bit the picture of male bewilderment. “Who the hell knows?”
“If it makes you feel any better, I just got dumped, too.” She jerked her head toward the box. “Hence the toys.”
Beckett’s brows creased and it looked as though he was about to lecture her. God, how did the man manage to look sexier than sin while wearing an expression better suited to an angry school principal?
Clearly your ex screwed with your head so much you no longer know what or who you’re attracted to. 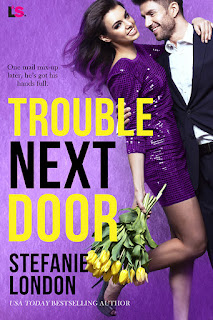 McKenna Prescott is the queen of picking the wrong men. When her latest boyfriend dumps her, she decides to devote her time to “exploring herself” (read: drinking wine and ordering sex toys online) and starting her freelance makeup business. That is, until an embarrassing delivery mix-up puts her sexy, gruff neighbor in her path…

Beckett Walsh is married to his job…which is a deal-breaker for the woman he’s supposed to be marrying. Even worse, his would-be father-in-law has pulled support from Beckett’s startup and now Beckett stands to lose everything. But the gorgeous, crazy makeup artist from down the hall has an equally crazy but mutually beneficial idea: if he convinces his sister to hire McKenna for her high-society wedding, McKenna will teach him about what women want so he can get his fiancée back.

All he has to do is make sure he doesn’t fall for the wrong girl.