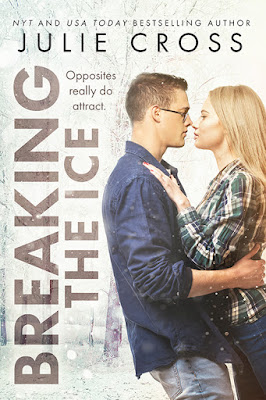 Haley Stevenson seems like she’s got it all together: cheer captain, “Princess” of Juniper Falls, and voted Most Likely to Get Things Done. But below the surface, she’s struggling with a less-than-stellar GPA and still reeling from the loss of her first love. Repeating her Civics class during summer school is her chance to Get Things Done, not angst over boys. In fact, she’s sworn them off completely until college.

Fletcher Scott is happy to keep a low profile around Juniper Falls. He’s always been the invisible guy, warming the bench on the hockey team and moonlighting at a job that would make his grandma blush. Suddenly, though, he’s finding he wants more: more time on the ice, and more time with his infuriatingly perfect summer-school study partner.

But leave it to a girl who requires perfection to shake up a boy who’s ready to break all the rules.

Add Breaking the Ice to your Goodreads’ TBR: https://www.goodreads.com/book/show/34921587-breaking-the-ice

Excerpt:
An hour later, we’ve decided on a PowerPoint presentation but haven’t really gotten anywhere toward completing the assignment, but it’s nearly time for me to head to work and Haley has plans. I leave Cole in the living room and walk both of them out. Jamie, who’s not as fond of the dogs, gets right into Haley’s Honda Civic, but she stops to pet all three.
Feeling like we left things unfinished earlier, I bite the bullet and apologize. “I’m sorry for tricking you into coming here.”
Haley stands up and faces me, her dress covered in dusty dirt. She’s braided her hair into a long, intricate braid over the last hour—the girl does not stop moving—and she grips the end of the braid, twisting it around her finger. “I just thought you wanted to work with me. I guess that was my fault for making an assumption. I mean, why would you?”
“Especially after the Cheerios,” I joke.
Haley gives a half smile at that, but her eyes show defeat. I scrub a hand over my face and do something I know I’ll regret. “Look, let’s start over. Tomorrow, you and me. Making the most awesome Constitution project ever, okay?”
Her whole face lights. “Together? Fifty-fifty?”
“Fifty-fifty,” I confirm. Please don’t let this suck.
Haley throws her arms around my neck, and I’m so shocked I don’t move to remove them. In fact, I return the hug, wrapping an arm around her tiny waist. The urge to pull her against me, grind our hips together, and swing her around hits hard and fast. I’m startled by this new development and release her, stepping back before anything else happens.
Haley blushes, realizing my reaction. “Sorry. I’m a hugging person.” She nods toward her car. “Jamie, too. So watch out. He’ll crush you before you can ask him to let go.”
I shove my glasses back to the bridge of my nose. “I’ll be sure to keep my distance. From Jamie,” I add. And you.
Jesus. What the hell?
Haley turns quickly and opens the car door. “See you tomorrow, Fletch. I’ll come about the same time?”
“Yeah, sure.”
When I walk back into the living room, Cole has the recliner lying all the way back, and he’s staring up at the ceiling, his hands behind his head.
“I think that went well,” he says, a big grin on his face.
My stomach twists. I should just tell him that Haley’s not interested. But I can’t remember the last time I’ve seen Cole this happy, and I can’t bring myself to tell him. Besides, he thinks his chat with Haley—which was like a bizarre academic lesson in basic conversation—went well. He might not even believe me. Then I’d be the bad guy who told him he doesn’t stand a chance. Truth is, give it a couple of years and Cole might stand a chance with someone like Haley. Hell, that’s what happened with Tanley and Claire O’Connor. But right now, Haley and Cole are in very different places.
The other reason that I don’t want to tell Cole what Haley said: I can’t get her out of my head—the feel of my arms around her…she’s the perfect size for me. I could lift her with a couple of fingers.
So yeah, I need to get my head somewhere else ASAP.

About Julie Cross:
Julie lives in Central Illinois with her husband and three children. She's a former gymnast, longtime gymnastics fan, coach, and former Gymnastics Program Director with the YMCA. She's a lover of books, devouring several novels a week, especially in the young adult and new adult genres. Outside of her reading and writing credibility's, Julie Cross is a committed--but not talented--long distance runner, creator of imaginary beach vacations, Midwest bipolar weather survivor, expired CPR certification card holder, as well as a ponytail and gym shoe addict. You can find her online via twitter, her personal website, email, Facebook, Goodreads, or co-moderating the YAwriters section of Reddit.