Excerpt
Lizzie hadn’t known what to expect when she saw him. They’d been friends, the best of friends, for more than a decade. Until the night of that fateful kiss. It had been nearly a year since then. Since she’d had her world turned inside out.
Solomon took her breath away. He always had, but she’d never understood the emotions she felt until the first touch of his lips on hers. His midnight hair was shorter than the last time they’d seen one another, and he had a smattering of dark stubble growth on his square jaw that was new. It made him seem more raw, less refined, and caused a low burn in her midsection. His skin always carried a trace of a tan, in contrast to her own ivory skin that wouldn’t hold color to save her life. His broad shoulders moved with a sinuous grace, muscles rippling beneath his heather gray Henley, which sculpted and fit his chest: defining, and outlining how ripped his body was as his hands moved over the keyboard.
The man, quite simply put, made love to his instrument. It was the only way Lizzie could describe how Solomon played the keyboard. His entire body was fluid and intense, leaning and swaying as his fingers moved effortlessly. He caressed the black and white keys, stroking them to sounds as he wanted them to, and left the crowd panting, wanting more. It was exactly what Liz believed love should be, especially the first time. Maybe she was naive, and that wasn’t how the world really worked. But in her opinion, it was how it should work.
She felt the same way about the flute. 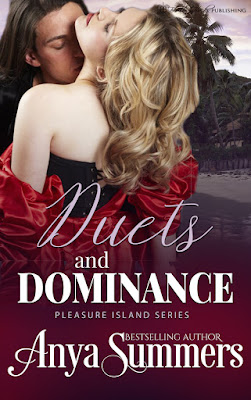 Elizabeth “Lizzie” von Klepper has a problem of epic proportions—she’s the oldest virgin in the world. Invited to perform on Pleasure Island with her best friend Solomon, she devises a plan to seduce him, and rid herself of that infernal status. After all, they shared a mind-blowing kiss a year ago and that has to count for something, right?

Solomon Ventura adores Lizzie. She’s been his best friend since their humble beginnings at Julliard, but deep down he’s yearned for her. For more. And ever since he tasted her, a stolen kiss he hasn’t been able to forget, he cannot seem to stop his mind from conjuring up myriad fantasies with Lizzie in the starring role. But he’s not the man for her. She’s light where he is dark, and his brand of love would shatter the only woman he’s ever cared about.


Will the best friends move their relationship out of the friendzone? Or will a week spent on Pleasure Island destroy them both?

Bio
Born in St. Louis, Missouri, Anya grew up listening to Cardinals baseball and reading anything she could get her hands on. She remembers her mother saying if only she would read the right type of books instead binging her way through the romance aisles at the bookstore, she’d have been a doctor. While Anya never did get that doctorate, she graduated cum laude from the University of Missouri-St. Louis with an M.A. in History.
Anya is a bestselling and award-winning author published in multiple fiction genres. She also writes urban fantasy and paranormal romance under the name Maggie Mae Gallagher. A total geek at her core, when she is not writing, she adores attending the latest comic con or spending time with her family. She currently lives in the Midwest with her two furry felines.
Visit her website here:
www.anyasummers.com
Visit her on social media here:
http://www.facebook.com/AnyaSummersAuthor
Twitter: @AnyaBSummers
Goodreads: https://www.goodreads.com/author/show/15183606.Anya_Summers
Sign-up for Anya Summers Newsletter
Amazon Author Page https://www.amazon.com/Anya-Summers/e/B01EGTVRKC/
Bookbub https://www.bookbub.com/authors/anya-summers