Believe in My Heart

Congratulations to "Odette", the winner in Maria's giveaway. Thank you to all who participated! 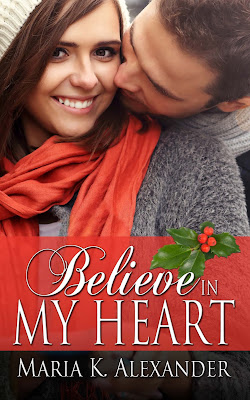 This holiday, love is on the menu.

Culinary arts student, Hope Mastriano, is down on her luck. Homeless on Thanksgiving Day, she’s caught trying to break into her cousin’s apartment by her sexy boss and lifelong secret crush.

Since getting dumped seven months ago, head chef Vinnie DiFrancesco has been in a frustrating holding pattern. He returns relaxed from a retreat, but his life is sent into a tailspin when he offers Hope, the event coordinator at his family’s trattoria, temporary housing.

With the trattoria’s traditional Italian Christmas Eve charity dinner slated to be featured on a local TV segment and things heating up in his apartment, the two must set aside their different visions to make the event a success. When a computer glitch threatens their plans, Hope proposes a risky solution. Vinnie must believe in Hope and his heart in order to secure the future of the restaurant and make it a Christmas to remember.

Excerpt from Believe in My Heart:
The snow had tapered to a light flurry, and the inch on top of what was already there was enough to disguise the shabbiness of the faded brick building.
He jogged up the stairs to the fifth floor. Turning into the main hall, Vinnie made his way toward his apartment while digging in his pocket for the key and almost collided with three suitcases and a stack of boxes blocking his path.
Someone was moving out…or in, given the person was fiddling with the lock—with a hanger. He had moved in a couple days before his trip to California and hadn’t met any neighbors, but he did recall seeing a tall blonde woman walking out of this apartment one morning as he came in from his morning jog. This one was a few inches over five feet, and although he couldn’t see much, dark hair peeked out of the white knit cap on her head.
“Hey, can I help you?” he called.
She shrieked and dropped the hanger. “I can’t find my key and locked myself out.”
He knew that voice. “If that’s the case, why don’t you call the super?”
“My phone’s dead, and I don’t have his number.”
Vinnie pulled out his phone. “Then it’s a good thing I have it. I’ll give him a buzz.”
“No!” she cried and turned to face him.
Wide brown eyes framed by long brown lashes stared up at him.
“Hope?”
She pushed back the cap and brushed aside the bangs that fell into her eyes. “Vinnie. Funny meeting you here.”
“Same goes. You don’t live here,” Vinnie countered, surprised to be faced with one of the pantry chefs from where he worked.
Hope raised her hands. “I know how this looks, but I can explain.”
“You can explain why you’re trying to break into this apartment?”
“It’s my cousin Faith’s place. And I wasn’t breaking in.”
Vinnie raised an eyebrow and shifted his gaze to the hanger on the ground.
“Okay, so maybe it seems as though I was breaking in, but the key she gave me no longer works.” She reached in her coat pocket and withdrew a key similar to Vinnie’s.
“Did you try calling your cousin?”
“Gee, no, I didn’t think of that,” she sneered. “She’s on a cruise and then staying in Florida a few days for business. I wasn’t kidding about my phone dying and not knowing the super’s number.”
Vinnie felt a pain in his temple. Probably from not having enough to eat or drink on the red-eye from LA. “Fine, let’s get your stuff in my place. You can use my phone.”
Hope grabbed a handle of a suitcase. “Thanks, Vin. You’re nicer than people at work say.”
He paused while unlocking his door. Well, hell. Is that what they say about me? Guess he needed to do damage control with his staff. Even though his parents owned Trattoria DiFrancesco, Vinnie was the head chef and in charge of hiring of anyone who worked in the kitchen.
Including the pretty spitfire who had just swept past him, Hope Mastriano.
He hoisted the stack of boxes and followed her inside. When she headed back out, he perused the hall to see how much more stuff she had.
There were two more suitcases and a pet carrier.
“You run away or something?” Vinnie asked.
“Moved out of Steve’s place. I’m done with that deadbeat.”
“On Thanksgiving Day and with nowhere to go?”
“It’s been long overdue. Besides, I thought I could crash at Faith’s until I figured out my next step.”
“And in there?” He nodded to the carrier.
Hope raised it up a few inches. “This is Lucky, my cat.”
Vinnie was not a fan of cats, with their sharp eyes and sneaky ways. He peeked inside and into the green eyes of a white cat. He closed the front door and stepped around Hope’s stuff, including the cat, which she pulled out of the carrier. Lucky leaned forward and sniffed him before letting out a soft mew.
Between the pixie-haired cutie and the cat, the peace and relaxation he had found out west was a distant memory. By the time he got to the trattoria for Thanksgiving dinner, Vinnie was going to need a beer or glass of wine.
Possibly both.

About Maria K. Alexander
Maria K. Alexander is an award-winning author of Contemporary Romance. When not writing, Maria loves to read, bake, downhill ski, visit the beach, and watch romantic comedies. Maria lives in New Jersey with her husband and children, and writes in her “spare” time between juggling a full-time job and her kids’ busy schedules. You can keep in touch with Maria at http://mariakalexander.com.

Giveaway
Name one food you look forward to indulging in over the holidays. One winner will get a digital copy of BELIEVE IN MY HEART.

Giveaway ends 11:59pm EST Nov. 21st. Please supply your email in the post. You may use spaces or full text for security. (ex. jsmith at gmail dot com) If you do not wish to supply your email, or have trouble posting, please email maureen@JustContemporaryRomance.com with a subject title of JCR GIVEAWAY to be entered in the current giveaway. US residents ONLY.
Posted by Maureen A. Miller at 12:30 AM