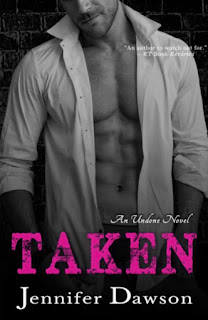 As a writer, one of the best things you can do is write a larger than life character.  When readers spot a character in one of your books they are just dying to read about, it’s awesome fun to watch them gush and beg for their book and it makes my little author heart happy.

See, passionate readers have passionate ideas, and lots and lots of expectations. Which is great! I love it. But trying to wrestle a hero into submission and give readers the story they deserve can be a daunting task.  Good thing I love a challenge.

And let me tell you, Brandon Townsend III, my hero in my new novel Taken, was quite a challenge!

Here’s the thing, writing never quite goes according to my plans. I guess that’s what happens when you don’t plot things out and the story takes over, but such is life.  When I first wrote Bandon in Sinful, I’d intended him to be a throw away character. In my head, I pictured him as a playboy type whose main purpose was to get the hero’s head out of his ass. When I concocted Brandon’s role he was supposed to have one scene with the heroine, make the hero insane with jealousy, and kindly take his leave.

Brandon had other ideas.

Now, don’t get me wrong, he fulfilled his destiny, but the second he came onto the page he basically dared me to pay attention to him.  Next thing I knew, he was a good friend to my hero, having heart-to-hearts with the heroine, and generally trying to take over my book.  If you’ve read the Undone Series, you’ll know exactly what I mean.

Every scene that man was in he tried to steal. Just like he stole the hearts of my readers.

They’ve been demanding sweetly asking for his story ever since.

Brandon and I had some fits and stops along the way, but I believe he finally has the happily ever after he deserves. 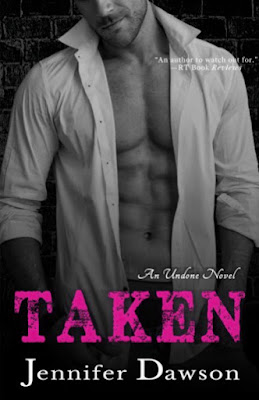 
Brandon Townsend III
Rich, beautiful and entitled, once upon a time he was king of the trust fund babies. He took anything and anyone he wanted, until one day, he walked away without explanation. Now, he’s an untouchable mystery, one I’m determined to crack. And I’m not talking about anything mundane like his bed. No, I want something far more valuable.
I want into his head.
Veronica Westwood has blown into my life creating chaos in her wake, and I don’t know quite what to do with her. Rich, beautiful and entitled, she represents everything I’ve sworn off in life, and her being unexpectedly clever doesn’t change that. Instincts warn me to stay away, and that’s just what I intend to do, no matter her attempts to wear me down. I’m good at saying no, or at least I was until I met her. I don’t understand it, but she’s like a weakness, and a man like me can’t have weakness.


I simply won’t allow it.


He continues to study me with that intense gaze of his until I shift in my chair and drink more wine to distract myself. He sighs. “I have strict rules for my organization. There’s not many, but they are absolute. I have those rules in place because they serve a purpose. You will violate my rule.”

My throat goes dry and I lick my lips. “What is your rule? I’m sure I will abide by it.”

He smirks. “No fucking your subordinates. Ever.”

I blink, unprepared for such directness. “Oh.”

His gaze darkens. “And I’m afraid, I very much want to fuck you, Veronica.”

I can’t help it, my cheeks flush and I find myself unable to speak.

He laces his fingers over his flat stomach. “That wouldn’t be a problem in itself, except for one important fact.”

“What’s that?” The words kind of stumble out of me. I’m used to Winston, he’s the only man I’ve ever been with, and he’d always been proper with me. He saved his depravity for the girls he took to bed on the side.

“I believe the feeling is mutual.”

I pull myself together and say coolly, “Is that not a bit presumptuous?”

“No, I don’t believe it is.” His expression is intent, purposeful. There’s not even a hint of shyness, or chagrin at so blatantly discussing the attraction between us. He tilts his head in the direction of the bathrooms. “I think if I walked you down that hall, and laid my mouth on you, there’s very little you wouldn’t do for me. I’d push up your dress, slide my fingers into your panties, and nothing could stop me from making you come. And you would come, Veronica. I would make sure of it.”

Hot all over, I swallow hard. I have no idea how to respond to this so I make an attempt to keep it on business. “Are you saying I’m incapable of being professional?”

I swipe a lock of my hair behind my ear, suddenly deflated. “Does that mean you’re not going to hire me?”