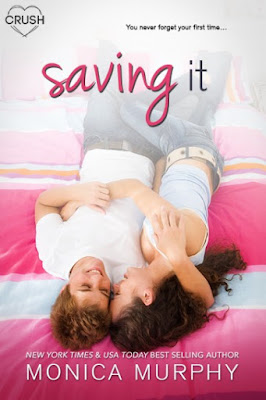 Eden: Josh Evans and I have been best friends forever. He knows all my secrets, and I know all of his. So when he randomly asks me to help him lose his virginity, I sort of flip out. That’s a question that sends your mind to places you’ve seriously never considered before. Like, you know. Having sex. With your best friend. Except Josh doesn’t want to have sex with me—he wants me to help him find a girl. A nice girl who’s funny and smart and cute. Except he already knows a girl just like that…Josh: Eden Sumner is my best friend. So of course she’d be the person to help me find my perfect match, so I can drop my V card before I head off to college. Except the more we search, the more I realize that maybe the right girl has been by my side all along. I don’t need Eden’s help in finding me a girl to love. I’m pretty sure I’m already in love with Eden. But now she thinks I’m only after one thing…with anyone but her.

Disclaimer: This Entangled Teen Crush book is what happens when American Pie meets Friends with Benefits. It contains two best friends, plenty of angst, and lots and lots of sex talk. Reading this might have you looking at your best friend in a different light!

Excerpt from Saving It by Monica Murphy:

I head outside to find the backyard packed with all kinds of people. I send Eden a quick text, asking where she is, but she doesn’t reply.
And I’m kind of starting to freak.
I search the backyard, checking the clusters of people that are drinking, smoking, and talking, but no Eden. My phone buzzes and I check it, but it’s just a snap from Whitney. Another sexy selfie that I again sense is sent out to a bunch of us versus just me.
Ignoring it, I pocket my phone and go around the side of the house to see if Eden is over there. There’s a small group of people circling one of those metal fire pits, and I spot her, standing on the far side of the fire, near the fence. There’s a guy next to her, and it looks like he’s talking to her.
It also looks like she’s trying to ignore him.
My protective instincts rising, I watch them, my fingers curling into fists when the guy leans in even closer to her, causing their shoulders to brush. She steps away from him, sending him an irritated look. Clearly she doesn’t want this dude talking to her, and he’s not getting the hint.
It’s when he tries to touch her arm and she jerks out of his hold that I spring into action. Without thought I head toward the fire pit until I’m right beside them, interrupting their conversation.
“Keep your hands off her,” I say, glowering at the guy. He’s shorter than me, but he’s bulkier, got more muscle. I bet I could take him.
“Who the hell are you?” The guy’s eyes are bloodshot, and he’s slurring his words. I’d guess he was drunk, which means I could totally take him no problem.
“Josh. What are you doing?” Eden asks, her voice rising.
I turn to look at her and gesture toward the drunk guy. “Is he bothering you, Eden?”
“Um…”
“Hey, asshole, get out of here,” the drunk guy tells me, grabbing hold of Eden’s arm yet again. “I saw her first.”
I grab her hand and pull her toward me so the guy has no choice but to let her go. “Yeah, well she came with me, so f**k off,” I tell him in my fiercest voice as I tug on her hand and we start to walk away.
The guy calls me a few choice names, but I ignore him. I’m not looking for a fight, though my blood is pumping hot and fast in my veins.
“What was that all about?” she asks, but I don’t answer her. I’m too worked up, adrenaline coursing through me, anger making it hard to speak. I hated seeing how that guy touched her like he owned her. I hate worse the fact that she’s questioning me like she doesn’t understand why I just defended her.

About the Author:
Monica Murphy is the New York Times, USA Today and #1 international bestselling author of the One Week Girlfriend series, the Billionaire Bachelors and The Rules series. Her books have been translated in almost a dozen languages and has sold over one million copies worldwide. She is both self-published and published by Random House/Bantam and Harper Collins/Avon. She writes new adult, young adult and contemporary romance.She is a wife and a mother of three who lives in central California on fourteen acres in the middle of nowhere along with their one dog and too many cats. A self-confessed workaholic, when she's not writing, she's reading or hanging out with her husband and kids. She's a firm believer in happy endings, though she will admit to putting her characters through angst-filled moments before they finally get that hard won HEA.
Posted by Maureen A. Miller at 12:30 AM