Congratulations to "Taurus", the winner in Maggie's giveaway. Thank you to all who participated!

I married a man who is custodial parent to two children. I am the not-so-wicked step-mother. After having his attention focused solely on them for five years, my husband's kids were excited that their father had found somebody to deflect for them. I think they also liked having a female in the house. When we married, my son was just seven years old and my daughter about to turn eleven. I went from being a single professional woman living in an apartment in Chicago, to being a married mother of two in a 980 square-foot house in Arkansas.
Instant family, add preacher.
So there we were, all five of us squashed together—me, my husband, our two children, and a dog who chased her tail. I don't mean figuratively. Precious literally chased her own tail. More often than not, she caught it. 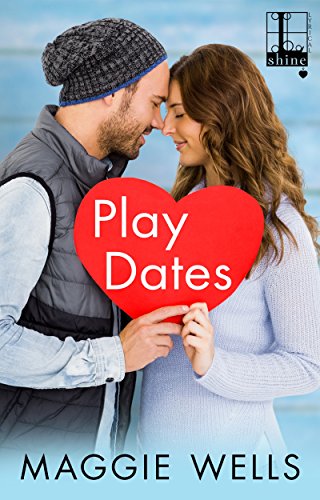 For many women, the first toy they were given as a child was a baby doll. We were programmed from early on that we should configure our lives with an eye toward motherhood. There's nothing wrong with wanting to be a mom. As the last child of older parents, I always thought I'd be married by my mid 20s and be done having my kids in my early 30s. Obviously, my present family situation is not what I imagined when I was a little girl playing with my baby dolls.
I married at thirty-two, became a mother at thirty-two, and realized that the two children I was raising were already almost halfway grown. I've never been one to feel the biological clock ticking, so I didn’t think starting over again with my husband was an imperative. My stepchildren have never been anything less than my children. Period.
Families come in all shapes and sizes. Some are created, others are chosen. In my new series, we are introduced to three women who meet and fall in love with full-time dads. The heroine of the first book, PLAY DATES, is a single professional woman named Monica Rayburn. Of the three, she might be the most like me. Monica meets Colm Cleary, and the next thing she knows, her ideas about what she wants out of life are turned on their ear.

Here's an excerpt from PLAY DATES:
“I’d like to make a couple of rules for the evening, if you’re game.”
“I think I might be game.” She gave him a coy half-smile. “What kind of rules did you have in mind?”
He watched in rapt fascination as she ran her finger around the rim of her glass. “No kid talk,” he blurted. Colm grimaced when he saw her flinch the slightest bit. “I mean, they’re great, and Aiden is the most important person in the world to me, as I’m sure Emma is for you,” he continued in a rush. “But you have no idea how long it’s been since I’ve had an adult night out. And I have to admit, even longer since I’ve had one with a woman.” He cringed a little when her eyebrows shot upward. “I mean, like I said at the park, a date. With a woman. Not a guy. Not that there’s anything wrong with that.” He added the line with a nervous chuckle, and at last she cracked.
Her laugh rang out, clear and unchecked. The sound held the barest hint of rasp, but every hair on his arms rose in response. “Okay. I’m with you. No kid talk.”
Relieved, he set his menu aside and reached for the IPA Especial he’d ordered. The beer was cold and crisp but did little to quench the thirst building inside of him.
“Listen, I don’t want to…Like I said, it’s been a long time. And I know I said I don’t want to talk about the kids—and I don’t—but I feel like I should be straight with you.”
Monica lowered her menu but raised an eyebrow. “Okay. Be straight.”
He winced at the implication but didn’t take the bait. “I don’t know how…involved I can get. I don’t have time to catch up on laundry, much less dating, and I’d hate—”
She held up one hand to stop him. “Colm.”
“Yes?”
“It’s fine. Let’s just…see how things go.”
He exhaled loudly and turned loose a relieved smile. “Sounds good.”
Returning her attention to the menu, she murmured, “As long as you are straight.”
“Oh, I am,” he assured her.

Giveaway:
Has your life turned out exactly as you planned? If not, what's been your biggest surprise so far? Comment below to be entered to win a copy of book one in my Coastal Heat series, GOING DEEP!

For single parents, life is often more diapers and daycare dilemmas than dating. But for three dads going solo, a little flirting can lead to a whole lot more than a fling . . .

Colm Cleary lost his wife just moments after his son Aiden’s birth, and it’s been just the two of them ever since. Dating is his very last priority—until he spots gorgeous Monica Rayburn on the playground with her little girl. Suddenly finding a woman sympathetic to the demands of single parenthood seems like a great idea—especially if they agree to a no-pressure, no-strings date . . .

Dazzled by the hot “Saturdaddy” who asks her out, Monica doesn’t get around to mentioning that little Emma is her niece. She’s in commodities, not children. A gambler to the bone, she’s going to take a chance on an adult evening with Colm—and worry about the details later. But when their casual connection deepens into something more solid, the truth will have to come out—and both Colm and Monica will have to throw caution to the wind to hold on to a future together . . .

About Maggie Wells:
Maggie Wells is a deep-down dirty girl with a weakness for hot heroes and happy endings. By day she is buried in spreadsheets, but at night she pens tales of people tangling up the sheets. The product of a charming rogue and a shameless flirt, this mild-mannered married lady has a naughty streak a mile wide.

Giveaway ends 11:59pm EST Oct. 5th. Please supply your email in the post. You may use spaces or full text for security. (ex. jsmith at gmail dot com) If you do not wish to supply your email, or have trouble posting, please email maureen@JustContemporaryRomance.com with a subject title of JCR GIVEAWAY to be entered in the current giveaway.