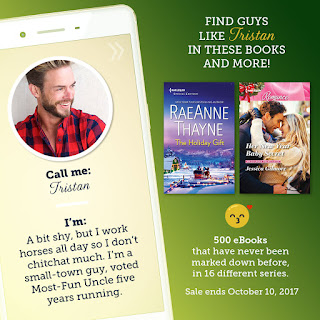 Harlequin is happy to announce their third annual backlist sale. Each year Harlequin has given readers a chance to get incredible deals on a large variety of romance novels. This year, they are having 500 ebook titles go on-sale from October 7-10, 2017, all for just $1.99 each. Even better news is that all titles included in the sale fall in the original on-sale range of June 2016 – June 2017, and have never been marked down before! For more information, visit the Harlequin Blog.

You can find these ebooks at some of your favorite e-retailers including Amazon Kindle, Barnes & Noble Nook, iBooks, Google Play, Kobo and Harlequin.com.

Here are some hand-selected titles just for the Just Contemporary Romance readers:

The Greek’s Christmas Bride by Lynne Graham (original on-sale: November 22, 2016): Coldly ruthless and deeply cynical, Apollo Metraxis has made a career of bachelorhood. But when the inheritance of his father's estate is conditional on marriage and a child, he is forced to do the unthinkable!
Unpolished Pixie Robinson is the world's worst choice of wife for Apollo. Yet her family's mounting debts leave her defenceless and therefore uniquely suitable. But when their wedding night exposes Pixie's untouched vulnerability, striking a chord in the dark reaches of his heart, Apollo is forced to think again.

And that's before he discovers that she's carrying not one - but two Metraxis heirs!

Bachelor Unforgiving by Brenda Jackson (original on-sale July 19, 2016): They say you can forgive but you can never forget. Virgil Bougard takes that saying to heart. Four years ago Kara Goshay believed a vicious lie about him and ended their relationship. And even after her apology, Virgil is still bitter. He doesn't intend to make things easy for Kara when his family's firm hires her PR company to revamp his playboy image. But faking a liaison with Kara for the media backfires when the line between fantasy and reality is blurred by strong sexual attraction.

Kara wanted forgiveness. Instead she's deep into a heated affair with the powerful, charismatic man she can't resist. The man who claims he'll never forgive her, especially when a secret enemy puts her professional reputation in jeopardy. Stakes are high—but so is their searing desire, a connection so intense it could possibly tame this elusive, unforgiving bachelor at last…

The Holiday Gift by RaeAnne Thayne (original on-sale November 2, 2016): With two kids and an active life, widow Faith Dustin only wants peace and quiet for Christmas. But her snowy Pine Gulch ranch is nothing but chaotic. All that keeps Faith going is her helpful neighbor, cowboy Chase Brannon. He's always been "good ol' Chase," her faithful friend. Until he kisses her under the mistletoe…

Years ago Chase blew his chance with the woman he's loved since childhood. Now he's determined to step out of the friend zone…and into the role of husband. But the scared and stubborn Faith won't let herself fall. With Christmas just days away, Chase will need all the magic of the season—and the help of her two matchmaking children.

Their Secret Royal Baby by Carol Marinelli (original on-sale March 1, 2017): Dr. Elias Santini, secret prince of Medrindos, has his world rocked when he attends an emergency delivery. The patient is Beth Foster, the woman he spent one stolen night with, and she's in premature labor…with his baby!

Estranged from her strict parents, Beth both fears the desire between them and yearns for the support Elias offers her as their tiny newborn fights for her life. A fiery kiss tempts Beth to risk everything, but what will happen when she discovers her daughter is the future heir to the Medrindos throne?

Her New Year Baby Secret by Jessica Gilmore (original on-sale January 1, 2017): Waitress Sophie Bradshaw is \used to being ignored at glamorous parties and, bruised by a disastrous relationship, that's fine by her. Until Marco Santoro offers her his jacket, leading to a magical Christmas evening together…

Exasperated by his family's matchmaking, millionaire Marco never gets close to anyone. But one heart-stopping night with Sophie isn't enough, and he invites her to his Venetian palazzo. Little does he know that Sophie is bringing one tiny, life-changing surprise with her!