Congratulations to "Colleen C.", the winner in Jeannie's giveaway. Thank you to all who participated!

I hear this statement and I think about my 7th grade science teacher, Mrs. Heilshorn, watching as groups of twelve-year-olds stood at lab tables playing with magnets. We’d turn them one way and the opposite poles would bring the magnets together, then we’d turn them the other way, and feel them repel each other. We’d record the data on the lab sheets and hand them in.

I loved science class. Sure, it was interesting, and I was a good student, but I really loved my lab partner one semester. He was a tall, brown-eyed boy who played football.  I was a shy, chunky girl with braces and ugly glasses who’d just come from Catholic school, and we had nothing in common.

My friends would remind me of that fact occasionally, but I kept thinking about those magnets. About the pull of the opposites toward each other. Why not? So, you know what I did?  I wrote my first short story. A romance with a geeky girl and a football player. It was love, and I saw no reason to believe opposites shouldn’t attract.

That story proved prophetic. Then Came You is another case of opposites attracting.
Mia had little experience with men, she was shy, and a bookworm who often played it safe. Adam was a hot-shot professional athlete who knew his way around the football field as well as the bedroom. They were different in so many ways, it was sometimes hard to see them together. But nature is funny and it seems there’s truth in the idea that people look for mates who complement them.

Adam would act without thinking, but the thoughtful Mia grounded him. He began to consider the people in his life, about how his behavior affected them. Mia on the other hand, grew stronger and bolder because of Adam’s support, and his faith in her. Throughout the book, their differences would put them at odds, but often the differences proved to be just what the other person needed. They didn’t see everything through the same lens, but in the end, that’s what made it work.

If we think about it, differences are what keep relationships interesting. Just like Mia and Adam who found common ground between them, most happily ever afters are between people who embrace what another person brings to their life, what they might be missing.  So, while my brown-eyed lab partner and I never did find that HEA, I found it with my polar opposite, and I can tell you, it’s never.

In THEN CAME YOU, a few meddling family members and a little bit of small town magic help two lost hearts find a second chance at love.  Fans of Susan Wiggs and RaeAnne Thayne will be enchanted by the Compass Cove series from International Bestselling Author, Jeannie Moon. 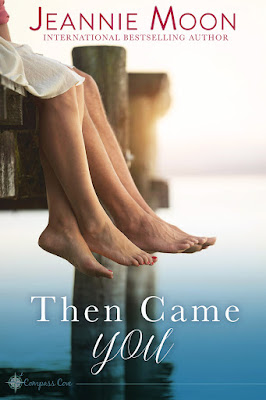 Hearts meant to love will always find each other.

Mia DeAngelis knew it was time to make a change. Wanting to provide a better life for herself and her ten-year-old nephew, Ben, she took a chance and moved to the small town of Compass Cove. Now, the college librarian is adapting to a new job, a new town, and living with her feisty seventy-eight-year-old grandmother. Mia is determined to make it all work, hoping the coastal hamlet gives both her and Ben the sense of community, family and belonging they both want so much.

Adam Miller, a retired NFL quarterback, has come back to Compass Cove to start over after an injury puts an end to his high-octane life. Settling into the small town routine proves to be a challenge, but his job coaching at Jennings College gives him a sense of purpose, while keeping him connected to the game he loves.

There couldn’t be two people more different, yet the minute they meet, friends and family have no doubt they belong together. Now if Mia and Adam can only get out of their own way and embrace a little home town magic, they can find the happy ever after they both crave…

Praise for THEN CAME YOU:

“Moon creates a strong sense of home and a convincing romance with moderate love scenes that will leave even the most cynical of readers overcome.” —Library Journal, Starred Review, on THEN CAME YOU

“Find your way to Compass Cove in this warm-hearted story of small towns and second chances, starting over and moving on. Mia and Adam will have you cheering them on as they navigate their way through this lovely romance.” —New York Times Bestselling Author Susan Wiggs

About Jeannie Moon:
Jeannie Moon, author of fifteen novels, has always been a romantic. When she’s not spinning tales of her own, Jeannie works as a school librarian, thankful she has a job that allows her to immerse herself in books and call it work. Married to her high school sweetheart, Jeannie has three kids, three lovable dogs and a mischievous cat and lives in her hometown on Long Island, NY. If she’s more than ten miles away from salt water for any longer than a week, she gets twitchy.

Giveaway:
One lucky person leaving a comment or email entry can win an eBook of their choice from Jeannie's backlist!

Giveaway ends 11:59pm EST Sept. 29th. Please supply your email in the post. You may use spaces or full text for security. (ex. jsmith at gmail dot com) If you do not wish to supply your email, or have trouble posting, please email maureen@JustContemporaryRomance.com with a subject title of JCR GIVEAWAY to be entered in the current giveaway.
Posted by Maureen A. Miller at 12:30 AM