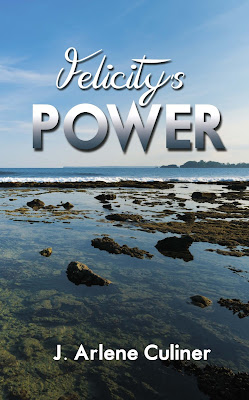 I’m quite excited: my contemporary romance, Felicity’s Power, has now been released as an audiobook, and it’s also linked to Whispersync.
Felicity’s Power is a story about lovers who meet again after a forty year separation. Back in the hippie days, the 1970s, Felicity and Marek loved each other deeply, but their romance wasn’t an easy one. Marek, the son of an alcoholic father and abused mother, wanted nothing more than a secure home life, children, and a settled job as a university professor. Felicity, the daughter of well-off parents, was determined to see the world, take risks. The last thing she was willing to accept, was suburbia’s planned landscape and comfort.
With such disparate goals, their romance was doomed. They separated. Both married — and divorced — other people; both followed their dreams with determination.
Now, forty years later, Felicity has crossed half the world just to see Marek again, and to show him that love can be even more wonderful the second time around. It’s a mad plan, of course, but Felicity has always believed that, if you want something, you have to go out and fight for it — even if nobody can win all the time.
Of course, Marek hesitates. He’s a cautious, independent man these days, and he treasures solitude, the peace and quiet of his isolated home in the woods. He’s convinced that Felicity still needs adventure and the world’s jangle, and that their relationship will again end as badly as it did the first time.
Yet, Felicity promises stimulation, joy, and the excitement of the unknown. Is that worth the risk of deception and heartbreak?

Felicity’s Power
Contemporary Romance from The Wild Rose Press
San Francisco, 1971: hippies in the streets, music and revolution in the air. The evening Marek Sumner opened his door to the wild-looking Felicity Powers, he knew nothing would ever be the same. But even love and passion couldn’t keep them together.
Forty-three years later, having lived in the world’s most dangerous places as an aid worker, Felicity is back, still offering love, passion, and adventure. Now a well-known author, Marek loves his calm life in an isolated farmhouse, and he knows their relationship would never work : he and Felicity are just too different. Besides, why risk having his heart broken a second time?
But Felicity is as fascinating and joyful as ever, and the wonderful sexy magic is still there too. Can love be more delightful the second time around?
Amazon
Wild Rose Press
Goodreads
Soundcloud
Excerpt from Felicity’s Power

Scree, pebbles, cracked shells, dried bubbles of blackened seaweed crackled under their feet as they followed the line of the shore toward a low, jagged promontory. The rocks were slippery from the spray, and it was easy to lose their footing. Marek remembered Felicity was only wearing thin ballerina shoes, and he reached down to take her hand, guide her onto the somber mass.
“Just a little further,” he encouraged her.
“I’m not worried,” she laughed back.
He could see the loose tendrils of hair flying in the wind and had to use his utmost control to stop himself from reaching out, smoothing them back, feeling their softness beneath his fingers.
They had reached the end of the promontory now. The night wind buffeted them, caught them in the rich scent of the sea.
“We can sit here. Look, there’s a sort of natural bench carved out.” 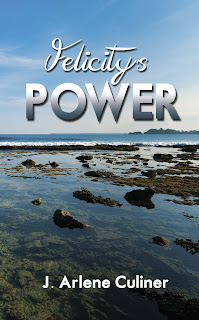 The bench was narrow, just wide enough to seat the two of them, just narrow enough so they had to sit touching. She could feel the length of his tight thigh against hers, the hardness of a hip. His warmth wafted over her. He smelt wonderful. His neck was so near. What if she leant over and bit it. Or licked it. What would he do?
“Cold?”
“Not at all.” Even if she were, she wouldn’t have missed this for the world.
“Liar. You’re shivering.”
“No, I... ” She could hardly tell him it was his nearness that was making her tremble.
He slid his arm around her, and what was left of her composure shot out into the sky, floated away on the puffing wind. She leaned back against him, blissfully.
“When you sit out here, you feel like you’re at the edge of the world.,” he said, his voice low. “That there’s nothing else but water out there, no land, no people. Just water until the earth comes to an end.”
“A believer in the flat earth theory, I see.” Felicity had to make an effort to keep her teasing tone. She willed herself to relax. If she didn’t, then she’d ruin everything. Marek would feel her intensity. Then he’d pull away, remove his arm once again and the magic would be gone, shattered into a billion particles, snatched up by night.

Does that sound intriguing? Come listen to an audio sample here:
https://www.audible.com/pd/Romance/Felicitys-Power-Audiobook/B072FVMTHH

And if you like listening to podcasts and (free) stories, come and listen to my series, Life in a Small French Village: https://soundcloud.com/j-arlene-culiner

Author Bio:
J.Arlene Culiner, born in New York, raised in Toronto, has spent most of her life in England, Germany, Holland, Turkey, France, Greece, Hungary and the Sahara. She now resides in a 300-year-old former inn in a French village of no real interest. Much to everyone’s dismay, she protects all living creatures, especially spiders and snakes. Her wild (or wildlife) garden is a classified butterfly and bird reserve, and her attic is home to many happy  bats. She works as an actress, a photographer, a contemporary artist, and a musician. In her perfectly believable romances, heroines are funny and gutsy, and her heroes are dashingly lovable. All are (proudly) over the age of forty.