Breakup in a Small Town – Playlist 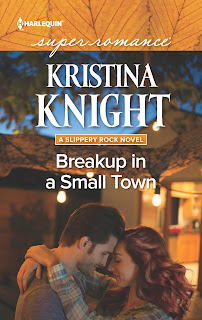 Breaking up is hard to do. Actually, I think staying broken up is harder, but apparently no songwriters agree…or maybe the angst from actually breaking up is simply easier to write about than the jubilation of a second chance. Who knows? Whatever the case, as I was writing Breakup in a Small Town, I found a host of songs about breaking up…and very few about getting back together.

Of course, I didn’t let that stop me because a reunion is, at it’s heart, a love story, and there are a plethora of songs about falling in love!

If you follow me on social media at all, you already know that music is at the heart of my life, and making playlists for my books is a chore that is so much fun I really can’t call it a chore at all! In fact, I’ve used ‘create a playlist’ as the carrot dangling from the end of the daily-wordcount-stick too many times to count!

So let’s get right into the playlist for Breakup in a Small Town, why don’t we?

Here are a few of the songs that made it onto the Slippery Rock series playlist:

All of these songs speak to me about home – about the bonds we make before we’re out of our teens. To me, those are some of the strongest bonds we ever make in our lives. They are the bonds that call us back, the bonds that we may try to re-create as adults.

Here are a few of the songs that made it onto the Breakup in a Small Town playlist:

I Could Use A Love Song by Maren Morris – Maren has become a quick favorite of mine over the past year or so – I adore her vocals, and the way she can evoke pain and heartache or joy and excitement with only her voice. This song, in particular, struck me as perfect for Jenny. From long before the book started, she had been feeling a bit neglected but more than that, lost. She’d lost who she was in the process of making a family with Adam. By the time the story starts, she isn’t sure what she wants, but she knows she wants something else…and this song just took me right there.

Wanna be that Song by Brett Eldredge – This song was Adam’s song from the moment I started writing the book. Even in the beginning, when he’s trying to convince himself that his family is better off without him, what he wants is to be the man Jenny wants. The problem is he doesn’t think he deserves to be that man…and helping him find the man she fell in love with – and helping that man grow up a little! – was so much fun!

Breakup in a Small Town by Sam Hunt – this one, of course!, had to make it onto the playlist. I mean, how could I title the book what I did and not include this song? Plus, it’s very much where Adam and Jenny both are. They’re trying to let go, but are unable to do it.

Cruise by Florida Georgia Line – This is just a fun song that fit the characters so well. I grew up in a small town, and a lot of our date nights were spent cruising a little strip of road, talking in parking lots, and grabbing an ice cream at the Dairy Queen. This song makes me feel all of that all over again, every time I turn it on.

I Don’t Dance by Lee Brice – Oh, I love this song so hard! And it was perfect for Jenny and Adam, because a lot of their journey back to each other is learning to bend, learning to enjoy the things that their partner enjoys…even if they never thought they could enjoy those things. That is what is at the heart of this song, which is just perfect for a reunion romance, don’t you think?

And here are a few more songs that brought Slippery Rock, Adam, and Jenny to life as I was writing:

Yours If You Want It by Rascall Flats

Do you have a favorite breakup (or make up) song? Share in the comments! 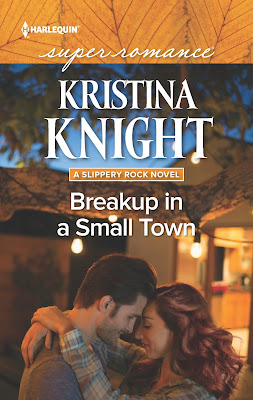 This isn't the man she married…

Jenny Buchanan never considered what "for better or for worse" meant when she married Adam Buchanan at nineteen. Six years and two little boys later, "for worse" arrives in the form of a tornado that ravages Slippery Rock and injures Adam. Now he's a stranger to his family…and love won't be enough to bring him back.

Only when Jenny asks him to move out does Adam become the husband she needs…but Adam isn't the only one who's changed. As their attraction sparks back to life, Jenny and Adam must learn what it is to grow up—and grow together—before this small-town breakup lasts forever.

Excerpt:
With the oversize can out of the way, Jenny grabbed the umbrella from the corner. “I’ll just take this around,” she said, and turned.

“Oof!” Adam staggered back. The umbrella clattered to the floor, and he doubled over.

“Oh, my God,” Jenny said, rushing to him. She put her arms around his shoulders. “Are you okay? I’m so sorry.”

He took in a long, slow breath. “I’m…fine,” he said, still breathing heavily. “You pack a punch with that umbrella.” He chuckled.

“Well, you were kind of in the wrong place at the wrong time.”

“I should have remembered that from other times your parents came over for a Sunday barbecue.” He straightened, and she saw that his clear gaze was filled with laughter, not pain. The squeezing in her chest lightened. He was okay.

“I should have been paying more attention,” she admitted.

“I should have ducked. My reflexes are a little slower than I remember.” But he didn’t seem upset by that fact. A few weeks ago, slower reflexes might have sent him into a days-long funk. He put his arm around her shoulders. “I’m okay, Jenny.”

“If a tornado can’t break me by collapsing a building on my head, you’re not going to do it with an umbrella.”

It was the first time he’d ever made a joke about what had happened to him. That had to mean something. Didn’t it?

“I guess not.” Jenny wrapped her arms around his waist and buried her face in his chest. He was still Adam. His body felt the same. That smile looked the same. She inhaled. He still used the same soap that made her nose tickle. “You’re still here,” she said, meaning the words to be a whisper.

His arms came around her waist. “I’m still here, Jen.”