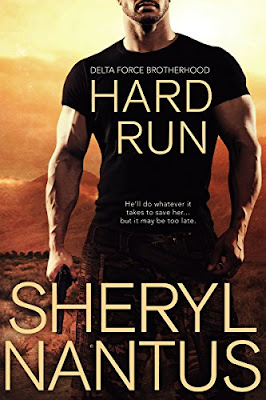 When Skye Harris shows up on the Devil's Playground's doorstep asking the Brotherhood for help with a gang taking over her hometown, it's time for Finn Storm to step up. The bikers might be tough but he's tougher – and armed with Brotherhood tech and a warrior's heart he's going to get the job done, no matter what or who stands in his way.

The one weak spot in his plan is in his heart––Skye gets under his skin like no other woman has and she's not going to let him take all the danger on his shoulders alone. But when she's caught in the crossfire Finn has to decide whether to follow his heart or his carefully crafted plan to not only clean up the town but heal his soul.
Books in the Delta Force series:
Hard Play
Hard Run

Her shoulders ached, and her feet were sore, but for the first time in days, she hadn’t been worrying about Robby non-stop. Finn’s suggestion that she go back to work had been spot on, the distraction a welcome change from sitting in the hospital.
April stuck her head in as Skye started on the second half of the over-stuffed sandwich. The senior waitress had been there for years and had taught her the tricks of the trade.
“Got a new customer on the far-right table. Just came in.”
Skye put her hand to her mouth as she swallowed. “I’m on break. Can you cover?”
“I would, but he asked for you by name. Told him you weren’t available, and he said whenever you were ready, he’d be. Good looking man. You been holding out on me?” The older woman laughed and turned away before Skye could say anything.
She finished her sandwich in record time and headed back out to the front.
Finn sat at the corner table, smiling as he scanned the menu.
“What are you doing here?” she whispered as she pulled out her notepad and pen.
“I do need to eat.” He raised one eyebrow. “I guess you already had dinner.”
“What?” She shook her head, trying to wrap her mind around his arrival.
He leaned forward and swiped his thumb over the edge of her mouth. “I said, I guess you’ve already eaten.”
The soft brush on her skin sent a tremor through her body. She gripped the pen so hard she was afraid she’d snap it in half.
Finn sat down again, licking the mayo off his thumb. “Yum. Can I get an order of whatever you just had?”
She forced herself to scowl. “Aren’t you supposed to be out doing some sort of work?”
“I did. And I am.” He placed his cell phone on the table and stroked the screen. “There’s an app for that.” He spun it around for her to see.
Skye looked at the digital display. “What’s that?”
“The gang’s clubhouse. To be precise, the front of it.” Finn let her study it for a moment before tucking the phone away. “It’s a video feed to see if they bring any of their shipments inside their hideout. I doubt it, but we’re watching all the same.”
“How did you do that?” She was half horrified he’d taken such a risk and half thrilled he’d managed to do it.
“Trey has some nice toys, and he lets me use them every once in a while. Me, I’m more of a hands-on man. Not that there’s anything wrong with toys…” He paused, just long enough to set her imagination on fire.
“Now what would you suggest I eat?” He picked up the menu, seemingly oblivious to the tease he’d tossed out. “I’m craving something delicious. Your recommendations?”
She closed her eyes, feeling heat burn her cheeks.

About the Author:
Sheryl Nantus was born in Montreal, Canada and grew up in Toronto, Canada. She met Martin Nantus through the online fanfiction community in 1993 and moved to the United States in 2000 in order to marry. A firm believer in the healing properties of peppermint and chai tea she continues to write short stories and novels while searching for the perfect cuppa.