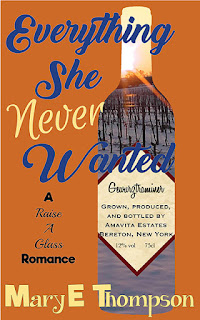 Most people think of Napa or Sonoma Valleys when they think of wine. Or Italy. Germany. Australia. So many amazing places that make incredible wine. Where I live, near Buffalo, New York, I think of ice wine in the Niagara region, and Riesling in the Finger Lakes. The Finger Lakes is at the same latitude as Germany, and because of that, they make world-class Riesling. It grows like weeds and is delicious.

It was also perfect for my series.

I write small town romance and love to showcase areas of New York, and maybe other parts of the country, that rarely get page time. A lot of people write about New York City, but other areas of New York are frequently left out. The Finger Lakes was definitely one of those places. I don’t understand because it’s a beautiful place.

I mean, really, does it get better than vineyards every half mile or so?

My husband and I booked a three day trip to the Finger Lakes so I could get a good feel for it. I hadn’t been there since I was a kid and wanted to make sure my stories were authentic. We toured vineyards, went on wine tastings, checked out local landmarks, and drank lots and lots of wine.

When I wasn’t drinking wine, I knew I found the perfect place to set my series.

The Finger Lakes has a perfect small town feel. Tiny towns dotted the shores of Cayuga Lake. All the people were kind and welcoming. It was quintessential small town. It was my fictional town of Bereton, New York. I told my husband I want to live there.
And even better, my readers want to go there, too!

“You know,” she finally said, “small town life isn’t wrong. It’s perfect for some people. My mom. You. Your family. I’d never say that people who want to live in a small town are wrong.”

“I didn’t say you did. You love being in the city. I don’t see it, but I’m not going to try to convince you that you’re wrong. That’s suicide.”

Henry nodded, grinning. “Oh, yes you would. And you know it. No one can tell Cynthia Hill that her opinion is wrong.”

“Well, it’s an opinion. By definition-”

“It can’t be wrong. Because it’s what I think and feel and it might be different than yours, but it’s not wrong,” Henry finished with her.

Cynthia tried to show that she was angry at him, but they both started laughing. She’d given the same speech in high school so many times that Henry memorized it.

Of course, he memorized a lot of things about her.

“It is true,” Henry agreed. “That’s why I’d never try to tell you that your opinion is wrong. It’s not. It’s just different from mine. And that’s okay.”

Cynthia was quiet as they turned and headed back to his Jeep. It was getting colder without the sun to warm them. Stores were closing and the street was getting darker. Streetlights dotted the road, but the sidewalk was cast in barely enough light to ensure they didn’t turn an ankle.

“There are things I like about being here, you know,” Cynthia said, surprising him.
“Oh, yeah?”

She shrugged. “Being with you.” 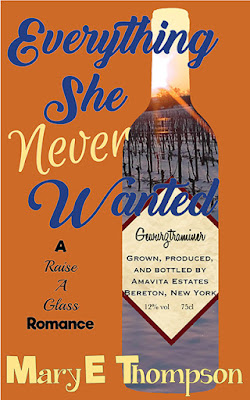 Everything She Never Wanted

Henry Wilson has been a strong and steady force for his family for years. When death steals one of them, Henry’s ability to keep himself together is tested. Even surrounded by people, he’s never had anyone to lean on. Not since he made the biggest mistake of his life and told his best friend he was in love with her.

Right before she disappeared from his life for good.

And the chips are down…

Cynthia Hill is inching closer and closer to the life she always feared. Still single, and now jobless, she’s living back at home with her mom. It isn’t as bad as she thought it would be, which scares her more than the way she thinks about her former best friend.

All they have is each other…

Henry knows getting involved with Cynthia won’t lead to anything but pain. She’ll go back to her life, and he’ll be left to deal with one more heartbreak. One he isn’t sure he’ll survive.

About the author
Mary E. Thompson grew up loving to read, like a good little girl. Many nights she would fall asleep with the flashlight still turned on as she hid under the covers trying to finish the last few pages of a book. As an adult, the light from her ereader means she doesn't need a flashlight, but she still stays up way too late to finish a book.

When Mary's not reading, she's playing with her two kids or living out her own real life romance novel with her hubby. She has a weakness for chocolate, especially when it's paired with peanut butter, and has been known to have a bad day just because there's no chocolate in the house. Unless there’s wine. Then everything is okay.

Mary grew up in Buffalo, New York and swears she's the only local to never ski or snowboard. Soccer was always her sport, with a couple adventures white water rafting and skydiving to keep things interesting. Mary moved to South Carolina for college but missed Buffalo every day. Yeah, she thinks she's crazy, too. She somehow convinced her South Carolina born and bred hubby to return to Buffalo to raise their kids and live out their lives. He’s still not sure what he was thinking.