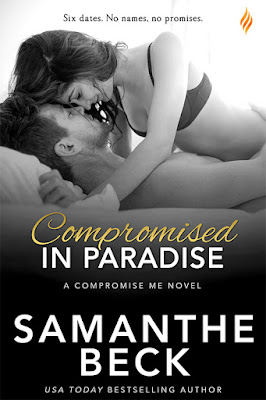 Stressed out hotel heiress Arden St. Sebastian is in Maui for one thing and one thing only. Work. But when the hottie at the bar buys her a drink to end all frilly umbrella-and-glow stick drinks, she can’t help but accept his unspoken invitation. When they get back to her villa, however, and the sexy moment of truth arrives, she can’t…quite…get there. Again.

ER resident Nick Bancroft can handle a night of fun, anonymous sex, but he draws the line at a fake orgasm. He makes his mystery woman a deal. He’ll take care of her little stress-induced orgasm problem if she’ll spend the next six days exploring the island with him, no questions asked.

A week of island relaxation on the arm of the sexiest man she’s ever met? Arden’s game. As long as she keeps her identity secret, she’s got nothing to lose…except her heart.

She was a woman on vacation, not a patient in his ER. Her stress-induced inability to climax wasn’t his to diagnose, but damn if he didn’t want to solve this for her. Badly. “How long are you in town?” Holy shit. Where had that come from?
Her gaze flickered to his. After a brief silence, during which he could practically hear her debating whether to tell him the truth, she said, “I leave Sunday morning.”
Six days. Not even a week. Plenty of time to work on her little stress problem, and send her home to—ha, ha—Siberia with a smile on her face. He tugged his shirt on. “Give me six days, and I’ll give you the soul-deep, hurts-so-good, pray-for-mercy orgasm you’re craving. Guaranteed.”
Her eyebrows went up. “Guaranteed? You’re awfully sure of yourself, sir.”
“So sure, I’m willing to make you a bet. After you’re done praying for mercy, Czarina, you’re going to tell me your real name. Those are the stakes.” Okay. So that was new data. Apparently he wasn’t cool with fake orgasms or fake names.
“I tell you my name if you win?” She pulled her knees up to her chest and draped her arms around them. “What do I get if I win?”
“In this situation, if you win, you lose—which is not going to happen—but for the sake of parity, if I haven’t fucked the ache out of your hard-to-reach spots by the end of this week, we keep names out of it.”
He watched her face, looking for a clue to her thoughts. She dragged her lower lip through her teeth. “One caveat.”
Inside, he pumped a fist. Outwardly, he smiled. “Name it.”
“I can only give you five dates. I have plans Saturday night.”
“Fine.” Disappointing, actually. He had plans for Saturday night, too, but he’d have canceled his blind date in an instant if she’d been free, though he couldn’t explain why. Five dates would be four more than he needed, not to mention four more than he’d felt compelled to spend with anyone in a long time. “I have a caveat, too.”
She rested her chin on her knees. “Name it.”
He brought his face close to hers while he sneaked a hand into the space between her heels and her backside. “For the next five days, nobody touches this”—he stroked a finger along the silky path he was placing off-limits—“except me.”
“Ohh…kaaay.” She pressed her forehead to her knees for a long beat, and then raised her head. “I don’t think that will be a problem.”
He brought another finger into play. Her lips parted, and her pupils expanded. Hell, he was going to give her the best vacation of her life. “None of this.”
The blush made an encore appearance, extra bright this time. “N-not a problem.”
“This rule applies to you, too, Czarina. Understand? No touching yourself here, or here, or even here.”
Her eyelids fluttered. She licked her lips. “I…Lord…how would you know if I cheated?”
He closed his mouth over hers and kissed her damp lips at the same time he closed his thumb and forefinger over the bundle of nerves Mother Nature had designed to help her enjoy sex. Want it. Need it. “I’ll know.” He squeezed firmly enough to make her gasp and clutch his shoulders. “I know exactly how ripe and ready this little clit is. Over the next five days it’s only going to get riper, and readier, unless you sneak in some relief behind my back. So here’s the deal, Czarina. For the next five days, all this is mine.”

About the Author:
Wine lover, sleep fanatic, and USA Today Bestselling Author of sexy contemporary romance novels, Samanthe Beck lives in Malibu, California, with her long-suffering but extremely adorable husband and their turbo-son, Hud. Throw in a furry ninja named Kitty and Bebe the trash talking Chihuahua and you get the whole, chaotic picture.

When not clinging to sanity by her fingernails or dreaming up fun, fan-your-cheeks sexy ways to get her characters to happily-ever-afters, she searches for the perfect cabernet to pair with Ambien.