Congratulations to "Bn100", the winner in Molly's giveaway. Thank you to all who participated! 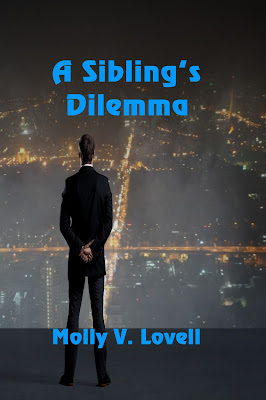 A Sibling’s Dilemma is a contemporary romance novel that revolves around two sisters: Cassie and Ellie Kent. Cassie is a private detective and Ellie is a recent college graduate. Cassie is hired by Charlie Logan, the CEO of a company specializing in virtual reality games, to spy on Charlie’s greatest professional rival—Edric Kensington. This is no easy task--Edric Kensington is known for being as cold and guarded as he is handsome. To successfully infiltrate Edric’s company, Cassie needs to have an insider work there. Her shy-and-sweet sister, Ellie, is the perfect fit. When Ellie first works for Edric’s company, she is afraid of the cold and aloof CEO, but, over time, she develops romantic feelings for him, just like Cassie develops feelings for Charlie Logan. The two sisters become torn between their friendship with each other and the feelings that they harbor for the handsome CEOs who have stolen their hearts.
Buy Links:

Ellie Kent sat nervously in the top floor of the Kensington group building. She wrung her hands and then fidgeted with the second copy of her résumé.

Am I qualified for this? I hope I’m good enough. I don’t want to let Cassie down.

She made herself as small as possible as she sat in the waiting room chair. Ellie smiled warmly at the nearby workers, turned bright-red, and then looked back down at her resume, avoiding all eye-contact with them once more.

They probably think I’m weird looking, or too scrawny. Ellie frowned. Her heart was racing a mile a minute. 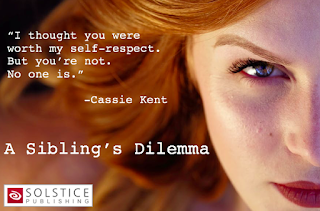 “Mr. Kensington is ready for your interview.”
“Thank you.” She stood up and then followed the secretary over to the doors. The young woman went to pull the door open, realized that it could only be open by being pushed, blushed, and then pushed it open.
Oh God. I can’t even open a door right.

Ellie walked inside the room and saw Edric Kensington sitting behind his desk. He appeared to be quite bored and unamused. She was surprised by how young he looked, she guessed he was in his early-to-mid thirties. Surprisingly handsome too—he was tall and slightly muscular with strong and symmetrical facial features and unblemished, olive skin. The pictures in the paper didn’t do him justice.

Edric wore a crisp navy-blue suit and had silver cufflinks. His chestnut-brown hair was combed neatly and seemed to frame his face well. Everything about him seemed put together. Ellie immediately felt embarrassed by her own appearance. She wore a light grey skirt suit that she got from the thrift store, which was just slightly too big for her.

The CEO stood up from behind his mahogany desk and walked over to Ellie. She immediately felt intimidated by his height and somewhat muscular stature—it made her feel small and scrawny. And she hated feeling small and scrawny. Suddenly she wished that Cassie were there with her. Someone strong that she could draw strength from.

He reached over and extended his hand to her. “Edric Kensington.”

Molly will be giving away an ebook copy of A SIBLING'S DILEMMA to one lucky reader leaving a comment or email entry.

"Molly V. Lovell is a law student at William and Mary by day, novelist by night. Her hobbies include writing (obviously), painting, looking at cute puppies, and reading books about political theory, a subject that Molly has a Master’s Degree in. Molly was born and raised in Amesbury, Massachusetts, by her two amazing parents and she now lives in Hyattsville, Maryland, with her loving husband."

Giveaway ends 11:59pm EST August 27th. Please supply your email in the post. You may use spaces or full text for security. (ex. jsmith at gmail dot com) If you do not wish to supply your email, or have trouble posting, please email maureen@JustContemporaryRomance.com with a subject title of JCR GIVEAWAY to be entered in the current giveaway.
Posted by Maureen A. Miller at 12:30 AM