One Week With the Marine Avery Forrester has never been the type to settle down—not to one place, not to one job, and certainly not to one man. Still, when her long-term best friend with benefits comes home on leave with a plan—including marriage and children—she realizes she’ll have to do something drastic in order to keep him. Luckily, drastic is what she does best.

U.S. Marine Holden Morris has never backed down from a challenge. And this time, that challenge is persuading wild child Avery Forrester, the woman he’s loved his entire life, to marry him. He wants the whole deal—a wife, a family. But convincing her to become a military wife won’t be easy. Then again, he knows Avery—in every way possible. Armed with that kind of knowledge—carnal and otherwise--how can he possibly fail?

"You wanted to give this a try. This, us, thing."
"I do." He scrubbed a hand over the bristle of his chin and she fought back the urge to drool. Why did he have to look like a damn Brawny advertisement during their serious discussion?
She joined him on the couch. "Okay. Let's do it. I've made a list of terms and conditions--" 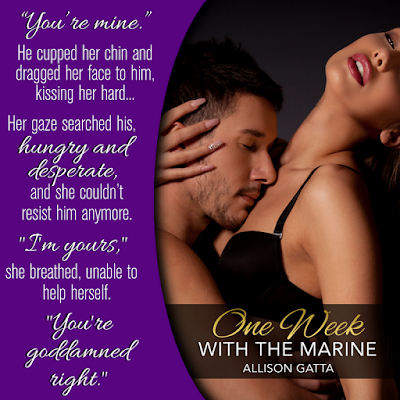 "No terms, no conditions." His mouth was a hard line of determination.
He slid closer--so that her knee grazed the firm muscle of his leg. Even that slight touch sent an electric spark surging between her thighs. He had her. It was over.
A one hit K. O.
"Then what--"
"You'll belong to me--"
"Belong seems a little caveman-ish--"
"We're together. That's it." He cupped his strong hand around her nape and every ounce of air in her body was gone. There was only him, the mintiness of his breath, and the scorching heat of his firm lips as he kissed her.
She responded to him without thinking, deepening the touch until she lost herself in the swirl of his tongue, the taste of his mouth.
When he pulled away, the room was spinning, moving in slow motion circles and all she could see was the handsome face in front of her. If this was the hard sell, then she'd fallen for it.
Hook, line, and sucker.

About the author:
Allison Gatta is an avid writer of steamy contemporary romance, an obsessive viewer of bad television, and an occasional player of overly-complex board games. In her free time, she thinks up fun, new characters and argues with her family over sci-fi trivia. She is a firm believer that Voldemort would vanquish Darth Vader in a duel.

Allison lives in the bustling city of New Haven, CT with her husband and their scrappy pup, Sophie. She is fueled by coffee and feedback, so feel free to get to know Allison though twitter (@Allison_Gatta), Facebook (Allison Gatta), or her website www.AllisonGatta.com.