Congratulations to Colleen C. and Taurus, the winners in Jess's giveaway. Thank you to all who participated!

Chance Seduction has taught me an important lesson. Romance readers love alpha heroes. And Adam, the hero, is as alpha as they come. Strong, domineering, opinionated, assertive, and well to be honest, a bit of an asshole. The thing is, romance readers don’t love assholes.

Adam’s behaviour often infuriated me as I wrote the book. And yet, he refused to act differently. The man has been so broken and so devastated by tragedy, his sole purpose in life now is to defend himself from further pain. He cuts himself off from emotional ties and close relationships of any kind. So when he meets Lexi, his heroine, a woman who won’t back down—no matter how scathing he is to her—his life and his defences are thrown into turmoil. Adam acts in the only way he knows how. He attacks.

I may not have been able to calm his bad moods, but after some firm words from my editor, Adam cooled off a little. She managed to tone down his behaviour significantly. While still broken, he is now far more palatable. But be warned: there are times he is still an asshole. He can’t help himself. Covering up pain that deep takes some serious effort.

I hope you enjoy the book and discover, like Lexi does, that underneath all the hurt is a man with a world of love to offer. 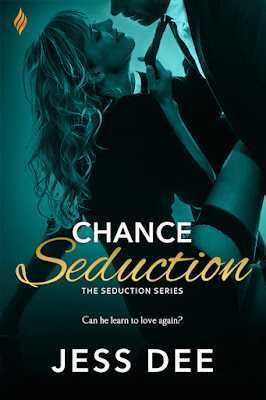 When Lexi Tanner’s unbelievably hot one-night stand turns out to be the same man she needs to approach for a hefty donation, things certainly get complicated. She’ll do anything to raise the money needed for the children’s charity she’s starting—but how can she ask AJ Riley for money now?

Adam knows he’ll never love again. He’s been there and done that. But the sexy woman he had an unbelievable night with causes cracks in his emotional defenses as well as cranks up his libido. One night should have burned her out of his system, but this kind of heat comes with strings…

An Excerpt
Adam pushed himself off the wall and took seven—she counted each one of them—very slow, very calculated steps in her direction. His face was unreadable, hypnotic, and she couldn’t tear her eyes away. He walked past her desk. Unsure of his intentions, she swallowed a tiny gasp as he stopped a mere heartbeat away from her.

The hunger was back in his expression, as it had been in the kitchen. Only this time, she refused to fall for it. Once bitten…

She took a step back, creating space between them. Wrong move. Her butt touched the desktop and she was trapped, caught between a slab of wood and a wall of muscle.

He stepped closer and inhaled slowly. When he exhaled, his breath mingled with hers, sending a wave of longing shimmering through her.

She wanted to punch him in the nose.

His aftershave tickled her senses, and she made a concerted effort to hold herself down and not reach over and bury her face in his chest and gasp in his masculine scent.

Desire overrode her aggravation. Need pulsed through her, so powerful it rendered her muscles useless. She stood paralyzed, aching for his touch.

Her lids grew heavy. She fought every impulse to close them, fought the temptation to tilt her head slightly backward and offer him her mouth as she had in the kitchen.

He swooped in and kissed her.

His lips enveloped hers, and his tongue took possession of her mouth. It delved inside, hot and wet and demanding. And sweet. Oh, so sweet. Waves of pleasure spiraled through her. Her toes curled and her stomach quivered, and she almost wept at the relief she found in his arms as they wrapped around her, pulling her against him.

Giveaway:
Jess will be giving away a choice of two ebooks from her backlist to one lucky person leaving a comment or email entry.

Jess’s first published story was originally contracted in 2005. Since then, she’s completed over 30 books, and is finally doing the work she loves most— writing romance.

While Jess lived most of her life in South Africa, the last fourteen years have been spent in Australia. From the fast-paced Sydney lifestyle to the laid-back islands and beaches, there’s always another gorgeous Aussie setting for a contemporary romance.