Congratulations to "Bn100", the winner in Cathryn's giveaway. Thank you to all who participated! 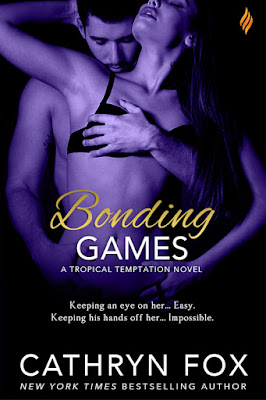 Former Navy SEAL Josh Steele gets tasked with a babysitting mission—watch over his boss’s daughter—a job he can only describe as hell. But when his assignment takes him to a tropical island, and he begins to see another side of Holly Fairfax, attraction sizzles between them—but he knows better than to risk his job for it.

Holly can’t believe that underneath those baggy clothes tech-guru Josh Steele is all ripped abs and sexy hotness. Ignoring said hotness is tough, especially since she has to work with him on the team-building exercises her boss has assigned if she wants a coveted promotion. It’s even harder when she discovers being around Josh brings out her naughty side – one she didn’t know she had.

But if she cracks the code on his cover, everything they’ve built could come crashing down.


Excerpt: She shifted from one foot to the other, glancing at her watch. Where the hell was the lifeguard? Her foot tapped restlessly. Okay, something was seriously wrong. As her heart raced, she kicked off her shoes, and pulled her sundress over her head. Dressed only in her lacy bra and comfy undies, she dove under and swam to the dark, lifeless figure on the bottom. Blue eyes flew open when she touched the man’s arm. Caught off guard, a bubble of air ripped from her lungs.
Big hands captured her shoulders, fingers biting in a tight grip. He kicked off the bottom, pulling her with him, and punched through the surface. He shook his head, his eyes going wide as his wet hair slicked off his face, showcasing his features.
“Holly?”
She sucked in a huge breath, and for one shocked moment she just stared. “Josh?”
He scrubbed his chin, the little rasping sounds of his day’s growth of beard reverberating through her. “What are you doing?” he asked.
“What do you mean what am I doing? What the hell are you doing?”
His glance moved over her face, his brows pulled together. “I was swimming.”
“Swimming?” she asked, her voice boarding on hysteria. “You call that swimming? You were sitting on the bottom of the pool. Where I come from we call that drowning.”
Big droplets fell from his dark lashes as he lowered his lids, the hard lines on his face softening. He pulled her against his chest, and his strong heart pounded hard against her cheek. “Shit. I really scared you, didn’t I?”
“Yeah.”
He inched back, his gaze moving over her face again. “I’m sorry.”
“What were you doing?” she managed to say as strong hands splayed over her back. A shiver moved through her. Damn. That probably shouldn’t feel so good.
“It’s how I think. Unwind and relax, you know.” 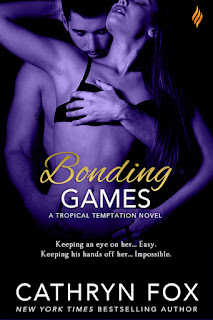 “No, I don’t know.” She shook her head. “That’s not normal, Josh.”
He laughed, a rich, decadent rumble that hit like a bolt of lust. All righty, then. “No? Then what is normal?”
“Get a retriever. Go for a run. Read a book. Drink wine.”
Wine. Yeah, forget the ice cream. Wine was exactly what she needed. Lots of it.

About the Author:
New York Times and USA Today Bestselling author, Cathryn Fox is a wife, mom, sister, daughter, and friend. She loves dogs, sunny weather, anything chocolate (she never says no to a brownie) pizza and red wine. She has two teenagers who keep her busy with their never ending activities, and a husband who is convinced he can turn her into a mixed martial arts fan. Cathryn can never find balance in her life, is always trying to find time to go to the gym, can never keep up with emails, Facebook or Twitter but loves to spend time writing page-turning books that her readers will love.

Street team. If you’re interested in joining we’d LOVE to have you. We have a lot of fun over there, and lots of special prizes and contests for my lovely FOXY ladies!  https://www.facebook.com/groups/FOXYFICTION/