Congratulations to "Taurus", the winner in Cathy and Patricia's giveaway. Thank you to all who participated! 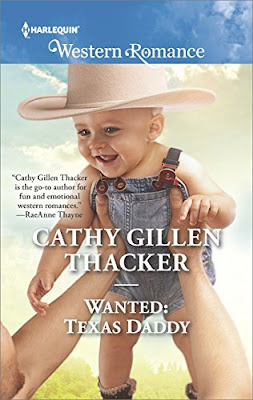 "Cathy Gillen Thacker is the go-to author for fun and emotional western romances. " —New York Times bestselling author RaeAnne Thayne
A SECRET BABY BARGAIN?
Small Texas towns always have their secrets. Fortunately, no one in Laramie knows about Sage Lockhart's friends-with-benefits arrangement with hunky cowboy Nick Monroe. And now Sage wants something more from Nick—something that could change the very nature of their relationship. She wants to have his baby.
Nick's always wanted to take things with Sage to the next level. Maybe this wasn't exactly what he had in mind, but having a child with Sage is an adventure Nick can't refuse. Of course, neither of them knew just how complicated things could get. With a baby on the way and all their careful plans unraveling, Sage and Nick must face the one secret they've been hiding from themselves…and from each other.

The love stories in my family have always been fodder for romance novels. My maternal grandmother and grandfather simultaneously ran a business together and raised four daughters, long before it was an accepted thing to do. Grandpa O’Dell ran the gas station and the barber shop; Grandma O’Dell managed the grocery and cooked for customers. They were true partners and madly in love and parted, tragically, way too soon when he succumbed to cancer when he was in his early fifties. Grandma grieved deeply but eventually picked herself up, started a new career as a cafeteria chef, and eventually found deep romantic love and happiness again, in the form of a second marriage. My paternal grandmother also bucked tradition. At twenty-six, she had turned down many a suitor, and instead focused on a career as a court reporter. That led to an introduction to a handsome young attorney, who also happened to be blind. She went to work for Roy John Gillen as a legal secretary, married him, produced six children, and continued doing his secretarial work through his long and distinguished career as an Ohio State Senator and then an Ohio State Court of Appeals judge. My Grandfather Gillen (Pap to all his grandkids) never liked having any other secretary but my grandmother, so they hired help to assist with the children, the cooking, and the cleaning, and she did all his typing and correspondence. They were married fifty-two years, and every year on their anniversary—which was Christmas Eve—Pap sent Grandma Myrna a dozen red roses. I thought it was swoon-worthy then, and I still do!My mother was a nursing student at Holzer Hospital in Gallipolis, Ohio when she heard rumor that a handsome young pre-med student had been brought into the hospital with a broken nose. (He had been playing baseball with friends and got walloped.) Never one to let opportunity pass, my mother quickly got herself assigned to the young doctor-to-be. They both claimed it was love at first sight. He was as smitten as she was. They dated steadily. And —over the protests of both sets of parents—who wanted them to wait until my dad actually was a doctor—married a few days before my dad began his studies at Vanderbilt University Medical School, producing six children and many memories during the fifty-two years they were married.As for my own romance, I met my husband Charlie when we were in high school. We were both in the marching band at the time, and one sunny fall afternoon, while standing around in uniform, waiting for the Lebanon Honey Festival parade to begin, a very cute upperclassman approached me. He smiled, and said, “Hi. You don’t know me. I’m a friend of your brother’s.”I rolled my eyes and sighed and said, just as frankly and seriously, ”Any friend of my brother’s, is no friend of mine.”Charlie insisted, “No. Seriously. I am a friend of your brother’s. It’s okay for you to talk to me.”I returned, “The fact you are a friend of my brother Steve is exactly why I should never talk to you.”And we were off. Repartee flying. Persistence in our opinions, on both our parts. By the time, I changed my mind and thought maybe I should have talked to him, Charlie had taken me at my word, and gone off to pursue someone else. I dated someone else, too. But Charlie had captured my attention, and I lusted after him secretly for the entire next year. Then I broke up with my boyfriend, he broke up with his girlfriend. I enlisted another friend of mine to signal that maybe I was interested. (Oh, the drama, the intrigue!) He asked me out. We started dating, and never looked back.Together, we’ve weathered high school and college and marriage and kids and pets, graduations, weddings, and even grandkids. We’ve helped each other through career ups and downs: transitions, hurdles, and achievements. Together, we’ve moved cross-country numerous times, nursed family members through long illnesses, and stood hand in hand as we said our final goodbyes to loved ones.All that has led me to believe that life is tough for all of us. For every ounce of joy we wring out of it, we have an equal share of challenges. What makes it all worthwhile is family.And family is what I write about in every book.To date, I’ve written and published over one hundred novels. Many are out of print, many are coming back in print via e-readers. (Hurrah!) In each story, I try to provide a few laughs, maybe a few tears, a few problems that seem… at first… unsolvable. As well as a lot of love.I thank all the readers who have supported me and my work over the years, and I welcome all the new ones with open arms, and much gratitude. Knowing I’ve made someone’s day a little brighter, with one of my books, is the best gift I could ever receive. 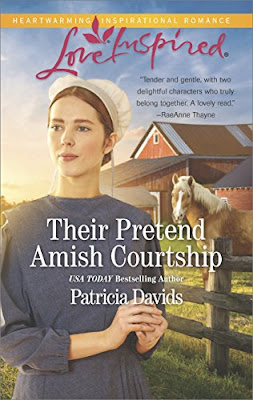 "Tender and gentle, with two delightful characters who truly belong together. A lovely read."  —RaeAnne Thayne
Make-Believe Beau
Fannie Erb isn't looking for a husband—especially if she has to leave her beloved horses to go find one. What she needs is a way to assure her parents she's not hopeless when it comes to love. Family friend Noah Bowman might just be her solution. A fake relationship will free them both from unwanted matchmaking plans. How could Fannie predict that pretending to date the handsome, teasing boy next door would awaken genuine emotions? By summer's end they'll be free to part, but Fannie's growing feelings are transforming her neighbor into the only man who might ever rein in her adventurous heart.

About Patricia:
USA Today Bestselling author Patricia Davids grew up on a Kansas farm with four brothers. After college she began a wonderful career as a nurse. In 1973 Pat wrote a letter to a lonely sailor. Little did she know her talent with words would bring her love, marriage and motherhood.
An avid reader, Pat longed to write a book, but put her dream on hold as she raised a family and worked in an NICU. It wasn't until 1996 that she began writing seriously. Today, Pat enjoys crafting emotionally satisfying romances where love and faith bring two people together forever.

Giveaway:
One lucky reader leaving a comment or email entry will win both of these books!

Giveaway ends 11:59pm EST June 12th. Please supply your email in the post. You may use spaces or full text for security. (ex. jsmith at gmail dot com) If you do not wish to supply your email, or have trouble posting, please email maureen@JustContemporaryRomance.com with a subject title of JCR GIVEAWAY to be entered in the current giveaway.
Posted by Maureen A. Miller at 12:30 AM