A great soundtrack brings added dimension to a movie, and in my opinion, it does the same with books. Granted, unlike the other medium, readers aren’t often exposed to the music the author selected for a particular scene or arc until maybe after the book is over, but the perfect soundtrack does impact the writing process. 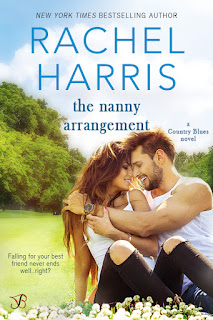 When I sit down to plot my next book, I always have my various music apps nearby. I choose songs based on the characters’ personalities and the overall story arc coming together in my imagination. Once the plot is finalized, I go back in and sometimes add or take away a handful of songs, but for the most part, the songs I choose during the first week of plotting remain on the list until I type ‘the end.’
I’ve discovered that the right playlist doesn’t just set the mood for the scene I’m about to write…it shapes it. It doesn’t just keep me inside my character’s mindset…it reveals it. Sometimes, I’ve chosen to put a song on my playlist for one reason, and later as I’m driving around Houston and hear it come on, I realize it fits perfectly for an entirely different reason. An aspect I hadn’t even thought about or envisioned. That’s why choosing a story soundtrack is so vital to my writing process.

For THE NANNY ARRANGEMENT, I had fun selecting songs. Deacon and Hannah have been best friends since high school when they both saved each other in different ways. Those memories, and the thousands of inside jokes, shared hurts, and overcome barriers shape the people they are today. It was important that I choose songs for both timelines, even though I was mainly focused on their twenty-something selves, and to also capture the essence of unrequited love and longing Hannah felt both in the past and present, and the new addition of Deacon’s unconditional love for his son, Max.

Here are a few of the songs I selected—I hope you enjoy!

Note: With Deacon being the fiddle player for a world famous country band, most of the songs are country ;) 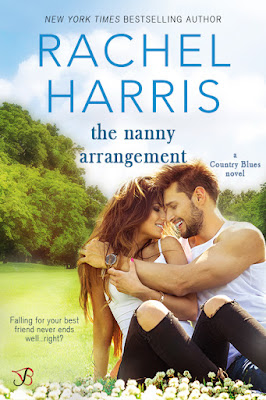 Soft-spoken and shy Hannah Fisher is determined to make the man she’s loved her entire life finally see her as a woman. With the help of a makeover, a new mission—Operation Find My Happy—and the convenient forced proximity of a tour bus, she vows to win her best friend Deacon’s heart.

Former bad boy and current fiddle player Deacon Latrell has the world at his fingertips: a new gig with a famous band, plus his best friend on tour as his son’s nanny. Life couldn’t get much sweeter. Now if only he could stop imagining kissing the daylights out of his childhood BFF…

With one friend set on pushing the boundaries and the other afraid to rock the boat, one thing’s for certain—their story would make one heck of a country song.

New York Times bestselling author Rachel Harris writes humorous love stories about sassy girls-next-door and the hot guys that make them swoon. Vibrant settings, witty banter, and strong relationships are a staple in each of her books…and kissing. Lots of kissing.
An admitted bookaholic and homeschool mom, she gets through each day by laughing at herself, hugging her kids, and watching way too much Food Network with her husband. She writes young adult, new adult, and adult romances, and LOVES talking with readers!
Author Website: https://rachelharriswrites.com/
Author Twitter: https://twitter.com/RachelHarrisBks
Author Facebook: https://www.facebook.com/RachelHarrisAuthor/
Newsletter: http://eepurl.com/olH75