Congratulations to "Maureen C.", the winner in Meg's giveaway. Thank you to all who participated!

Book 1 of my Brew Romance series for Entangled Publishing introduces the citizens of Antero, Colorado and their hometown brewery. My hero, Wyatt Montgomery knows a barrel of legendary Zoria imperial stout will help his Denver gastropub stay on top, and when he hears the Antero brewmaster has only one barrel left, he won’t stop until it’s his. But brewmaster Bec Dempsey has a few ideas of her own, and they don’t include romance with a sexy stranger. 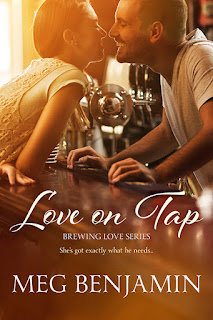 He brought his mouth to hers, breathing in her slight gasp of surprise, his hands dropping to her shoulders. For a moment they stood joined, her hands pressing against his chest, and then her mouth opened beneath his and his tongue darted in to taste. Sweet, so sweet. But something else too, like salted caramel, sweet and savory and unexpected. He moved closer, sliding a hand down her back, and heard her purr of arousal as her arms went around his neck. He cupped her ass, tight with muscle, and his pulse beat hard.

Or not. Bec stepped back, eyes wide, lips slightly open as she gasped in a breath. “No,” she whispered. “This can’t… We can’t… I can’t do this.”

“You can’t?” He narrowed his eyes. It seemed to him they not only could, they should. As soon as possible.

She shook her head, looking a little like a frightened child. “No. No, we can’t. I mean we’re working together. We can’t…do this. It’s not a good idea for people who work together to get involved. It causes all kinds of problems.”

Wyatt paused, letting his pulse slow down. He had a feeling she was on the verge of either rethinking her decision or telling him to get lost. He’d rather it wasn’t the latter. “Okay,” he said slowly. “We can think about it.” God only knew he’d be thinking about it, probably for the rest of the night.

To celebrate the release of Love On Tap, I’m giving away a $10 Amazon gift card. Entries will include a sign-up for my newsletter. (see the Rafflecopter below) 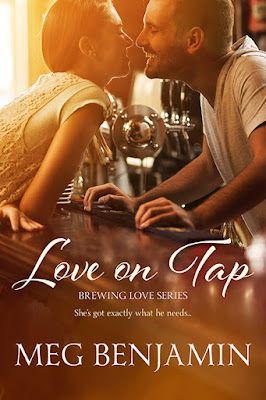 Wyatt Montgomery knows a barrel of legendary Zoria imperial stout will help his Denver gastropub stay on top. The only problem is the brewery that made it is no longer in business. When Wyatt hears the brewmaster has only one barrel left, he won’t stop until it’s his. He doesn’t consider what this mythical barrel might cost him. And he certainly doesn’t anticipate his reaction to the heart-stoppingly beautiful brewmaster he needs to convince to sell him the beer.

When Wyatt rushes into Bec Dempsey’s small-town cooperative offering to buy the last barrel of her precious Zoria, she’s thrown for a loop. She’s been burned by city-slickers before, and she’ll be damned if she’ll let it happen again. But when things start heating up between them, Bec decides to make Wyatt a counteroffer. One she hopes he won’t refuse.

About the author:
Meg Benjamin is an multi-published author of contemporary romance. Her books have won numerous awards, including an EPIC Award, a Romantic Times Reviewers’ Choice Award, the Holt Medallion from Virginia Romance Writers, the Beanpot Award from the New England Romance Writers and the Award of Excellence from Colorado Romance Writers. Although she began writing in Texas, Meg now lives in Colorado with her hubs of many years and two rather large Maine coon cats (well, partly Maine Coon anyway). Her Web site is http://www.MegBenjamin.com. You can follow her on Facebook (http://www.facebook.com/meg.benjamin1), Pinterest (http://pinterest.com/megbenjamin/), and Twitter (http://twitter.com/megbenj1). Meg loves to hear from readers—contact her at meg@megbenjamin.com.