Congratulations to "Maureen C.", the winner in Maria's giveaway. Thank you to all who participated! 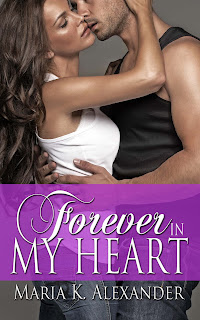 Cannoli…Italian cream cake…napoleon…cream puff…red velvet cupcake…cinnamon bun. Do I have your attention? These are just a sampling of the decadent treats you’ll find in my contemporary romance, Forever in My Heart, the second book in my award-winning Tangled Hearts series.

Vicky DiFrancesco owns the hot new café in town, and she’s up before the sun early each day to start baking mouthwatering desserts that will remind you of your grandmother’s kitchen. Desserts that have been known to bring even the strongest men to their knees. Case in point is Jamie DiSilva, the hero from Forever in My Heart. He’ll do about anything for them, including face the woman he hurt nine years ago.

What’s your secret indulgence? Your “go-to” dessert when you want to reward yourself for something, celebrate an event, or even just wallow for an afternoon?

I thought it would be fun to explore the main characters from Forever in My Heart based on their favorite dessert and to share what it says about their personality.

Vicky DiFrancesco– Heroine and owner of Decadent DeLites café and bakery
Italian Cream Cake – she has layers and doesn’t want to be defined by one thing. And with this tasty treat, she gets the best of both worlds with vanilla and chocolate filling. Don’t mess with her because like the rum in the spongy yellow cake, she has a little kick in her and can take care of herself. Especially when faced with a trio of goons on the trail for something they think is hidden in her café. Topped with whipped cream or buttercream icing, it’s a decadent combination that shouts out there’s more to this sassy café owner than meets the eye.

Cannoli – he has a tough guy exterior that can be easily broken (read about Jamie’s tragic cannoli encounters in Forever in My Heart). Like the sweet ricotta filling, he has a sensitive side and is always willing to lend a hand to friends and family. Despite the horror he’s seen while deployed, he’s a romantic at heart and works hard to redeem the family name and prove himself to Vicky.

Strawberry Shortcake – friendly and warm to others. Fun-loving. Lucy has Vicky’s back and stands beside her friend, even when they’re both caught up in something dangerous. She’ll also support Vicky when Jamie returns to town and she kicks him to the curb. She’s logical and dependable. She also happens to be wildly attracted to Jamie’s business partner.
Tristan Connelly – Jamie’s best friend and co-owner of Two Guys Home Improvement
Apple pie – hometown goodness is perfection in this sinful dessert. The slightly flaky crust and warm apple concoction is even more divine with scoop of vanilla ice cream or topped with whipped cream. This dessert says reliable, just like Tristan. He stood by Jamie during three tours of duty and helps his friend in his quest for redemption and winning over Vicky. Is it any wonder he’s a perfect match for Lucy?

Tiramisu – this dessert has it all! Ladyfingers, espresso, chocolate, mascarpone cheese. Some would say this can be a little complicated of a dessert to make and suits Kate since she is a complex character. Her tough girl attitude comes out as a defense mechanism when she’s hurting. Her intentions are good but she speaks before she thinks, which gets her into trouble. Underneath all those layers and feisty personality, she’s all sweetness once you get to know her.

NY Cheesecake – this rich and sophisticated dessert suits the devilishly sexy British architect to perfection. He’s refined and classy but likes a little excitement in life and enjoys a variety of toppings. But his favorite is topped with cherries and a dollop of whipped cream.

Lucas Black Weston – Kate & Edward’s adopted son (introduced in Untangle My Heart)
Chocolate cake with vanilla buttercream icing – this seven year old loves his dessert and can take up to fifteen minutes to make a selection at Aunt Vicky’s café. He’s had a rough life, having lost his birth parents and sister in a car accident years ago. Since having met the DiFrancesco family, he’s learned to savor every moment, including his tasty treats!

Cream Puff– don’t let the name of this dessert make you think Nick is soft. He’s a Northeast Philly police detective and tough as nails on the outside. His siblings see him as unbending but he has a high sense of what’s right versus wrong. Due to his police training he’s used to hiding his feelings. But similar to the inside of the cream puff, Nick is sweet and utterly divine. You can read Nick’s happy-ever-after in Awaken My Heart, which will be releasing on May 10, 2017.

Forever in My Heart is a sexy contemporary romance set in the backdrop of Philadelphia. The story has a sprinkle of comedy, a dash of suspense, Italian traditions, and enough decadent desserts to tempt you to head to the nearest bakery!
***
Excerpt:
The impact of seeing Vicky DiFrancesco after all this time slammed into him like a bullet in a flak jacket—hard enough impact to knock you down, but not kill you. She must think him an idiot, staring, but the nine years since he’d seen her had transformed her from a young and innocent girl to a hot and sexy woman.

Despite her quick recovery, Jamie had seen the flash of hurt before she glared at him with an air of indifference that was all Vicky…and still sexy after all these years.

“What the hell are you doing here?” she demanded, banging the tray of muffins she’d been carrying on the counter so hard one of them flipped off and onto the floor.

He nodded at his purchases on the counter. “Picking up a late morning snack.”

She pointed to the door. “Get out of my store, Jamie. You’re not welcome here.”

Her reaction didn’t surprise as much as disappoint him. This would be easier if she didn’t look as though she wanted to clock him with the tray of muffins.

“Nice place. Looks like you’re doing pretty well for yourself.” He lowered his gaze to her chest, and his cock stirred at the full mounds beneath the purple Tshirt. Someone had grown up since their teenage years.

“What are you, deaf?” She leaned forward and slid the cardboard takeout tray that held the bag and cups toward him. “I asked you to leave.”

He shook his head and tossed a ten on the counter. “Not until we talk.”

Ouch. He wasn’t surprised she cut right to the chase. No bullshit with Vicky. The sad part was he deserved it.

“Please, Vick. I’m asking for five minutes.” He lowered his head and attempted what he hoped was a remorseful expression. “For old times’ sake.”

She glared at him with light brown eyes. Teddy bear eyes he used to call them, and damn if they still didn’t turn him on.

“Five minutes.” Grabbing the tray with his food, she stomped around the counter to a set of empty tables.

Grateful she hadn’t refused, he followed. Although she dropped the tray on a table, she remained standing, feet firmly planted, hands on her hips, and attitude rolling off her in waves.

Now that he had her attention, his mind blanked. Her dark brown hair was pulled back in a high ponytail. She smelled like berries, apples, and cinnamon, and he had to fight the urge to reach out and see if she tasted as good.
*** 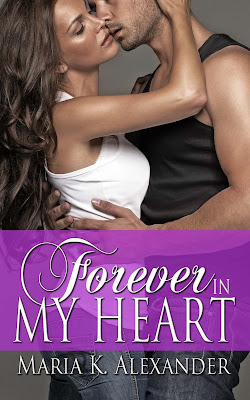 FOREVER IN MY HEART

Vicky DiFrancesco is ready to put the past behind her. After a humiliating divorce, she’s determined to make her new café a success. The last thing she needs is her first love around, reminding her of what they’d lost. But when her life is threatened, could he be the very man she needs?

Jamie DiSilva’s homecoming after retiring from the army isn’t the one he’d been hoping for. Now, he’s trying to start a home improvement business in a town settled on holding him accountable for the sins of his late brothers. Redeeming himself to the girl he never stopped loving and her family is difficult when his brothers’ secrets come back to haunt him.
Untangling themselves from the past means righting several wrongs and deciding if their love is meant to last forever.

GIVEAWAY:
What’s your go-to dessert, the one that’s your hands-down favorite? Comment below to win a Kindle or Nook version of Untangle My Heart (Tangled Hearts Book 1).

Maria K. Alexander is an award-winning author of contemporary romance. When not writing, Maria loves to read, bake, downhill ski, visit the beach, and watch romantic comedies. Maria lives in New Jersey with her husband and children, and writes in her “spare” time between juggling a full-time job and her kids’ busy schedules. You can keep in touch with Maria and read about her other works at http://mariakalexander.com.
Giveaway ends 11:59pm EST April 15th. Please supply your email in the post. You may use spaces or full text for security. (ex. jsmith at gmail dot com) If you do not wish to supply your email, or have trouble posting, please email maureen@JustContemporaryRomance.com with a subject title of JCR GIVEAWAY to be entered in the current giveaway.