Talk Cowboy To Me 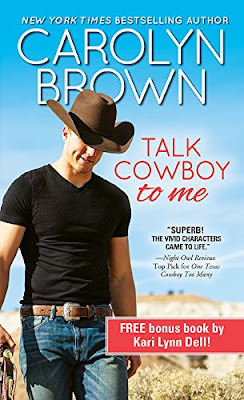 One cowboy. One cowgirl. One ranch.

Who will win the Double Deuce by the Fourth of July?

Adele O’Donnell knew that Double Deuce Ranch had to be hers the second she walked onto the property. Freshly divorced, she sees it as the perfect spot for her and the kids to start a new life. Remington Luckadeau was always a carefree playboy…until his suddenly orphaned nephews became his responsibility. The Double Deuce Ranch would be the perfect place to raise two boys. But some fiery woman is fighting him for it, and Remington is not sharing—no matter how the sparks fly when he and Adele are together.

NY Times and USA Today Bestselling author and RITA Finalist, Carolyn Brown, has published more than seventy books.  These days she is concentrating on her two loves:  women’s fiction and contemporary cowboy romance. She and her husband, a retired English teacher, make their home in southern Oklahoma.

The gleam in the old cowboy’s blue eyes and the way he rubbed his chin were Adele’s first clues that he definitely had something up the sleeve of his faded, old work shirt. He glanced first at her and then over at Remington Luckadeau.

She bit back a groan. The good old boys’ club was about to rear its head. They’d argue that ranching took brawn and muscle and that a woman couldn’t run the Double Deuce all alone, that women were respected in the ranching business these days, but when it came right down to it, he would feel better selling to a man.

She didn’t hold out any hope that the old toot would sell the ranch to her.

“Well, now.” Walter Jones gave his freshly shaven chin one more rub. “I expect we’ve got us one of them dilemma things, don’t we?”

That sly smile on Remington’s face said he already knew she would be going home empty-handed. With that mop of blond hair that kissed his shirt collar, those steel-blue eyes, and his chiseled face and wide shoulders—Lord have mercy—any woman would roll over and play dead to give him what he wanted.

She wanted the Double Deuce, and she’d do whatever it took to get it so she could have a place to raise her daughters. Remington Luckadeau could spit on his knuckles and get ready for a fierce battle.

The Double Deuce Ranch was absolutely perfect in every aspect. The two-storied, four-bedroom house couldn’t have been better laid out for Adele and her two daughters, Jett and Bella. The acreage was big enough to make a living but small enough she could manage it on her own, for the most part. And it was close to her family—the O’Donnells over around Ringgold, Texas. 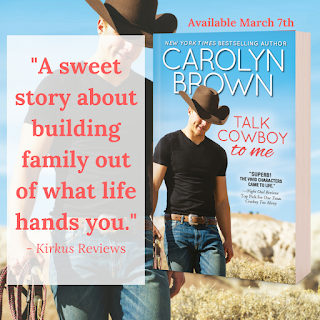 “And not a one of them was a bit of help, so I don’t know which one of you to sell this place to any more than I did yesterday, after you’d both come and looked over the place and left me to think about it.”

Adele had known there was another person interested in the ranch. Walter had been up-front about that, saying he’d talked with Remington Luckadeau that morning and he was ready to meet Walter’s asking price.
“We can’t both buy it, so I guess you’ll have to make a decision,” Adele said.
Remington nodded.

***
Remington slid down in the kitchen chair so he could study the red-haired woman sitting in front of him. The hard Texas sunlight flowing through the kitchen window brought out every cute, little freckle sprinkled across Adele’s nose. Faded jeans, a chambray shirt worn open over a bright-yellow tank top, and cowboy boots worn at the heels said she was a no-nonsense rancher.

Those two feisty girls out there on the porch with his two nephews were dressed pretty much the same way as their mother. Any other time, he might have tipped his hat and given her the option to buy the Double Deuce, but not today. The ranch was the perfect size for what he had in his bank account. The house would be just right for him and his two nephews, Leo and Nick, the boys he’d inherited when his brother and sister-in-law were killed in a car accident several months ago. And besides, it wasn’t far from his Luckadeau relatives in Ringgold and Saint Jo, Texas.

So today, Adele O’Donnell was going to have to walk away disappointed. Too bad, because he’d always been attracted to redheads, and he’d have loved to see how she felt in his arms on the dance floor of the nearest honky-tonk.

“So.” Walter cleared his throat. “I’ve come to a decision.”

Remy straightened up in his chair.

“The Luckadeaus are my friends, but so are the O’Donnells. So I can’t sell this to either of you on the basis of friendship. Vivien and I have planned a monthlong cruise, and we are leaving in one week. We fly out of Dallas on the last day of May and get back home on the last day of June.”

“It’s not got to do with money. Here’s what I am willin’ to do, though. You both move in here on the morning that me and Vivien leave. Y’all take care of this ranch for me for a month. When I get back, whichever one of you is still here can have it. If you both still want it, we’ll draw straws or play poker for it. If you decide you can’t work together or that the ranch ain’t what you want, you can call Chet to come take over for you. His number is on the front of the refrigerator. Only rule I’ve got is that you’d best take good care of Boss. He’s been a good cow dog, and he likes leftovers from the table, so cook a little extra at each meal. He’s not real picky. He’ll eat most anything a human will, but he doesn’t like pizza. And you have to take real good care of Jerry Lee.”

“Who is Jerry Lee?” Adele asked.

“He’s my rooster. Pretty little thing, but he never has learned to crow in the morning. He’s a late riser, so he crows either in the middle of the day or about dinnertime. I named him Jerry Lee because he’s got swagger and he sings real pretty like Jerry Lee Lewis.”

“I’ll take good care of your dog and your rooster,” Adele said, shooting a defiant look right at Remy.

“So will I.” Remy nodded coolly. “What about the one who doesn’t win the luck of the draw?”

“Then that one gets a decent paycheck,” Walter said.