Congratulations to "Bn100", the winner in Naima's giveaway. Thank you to all who participated!

Some people remember where they were when the Challenger exploded. Or when President Obama was inaugurated. Or when Prince died. I do, too. Mrs. Freeman’s second grade class, at work in a bank’s loan department, and home working on a book. But I also remember where I was when I first saw Lloyd Dobler stand beneath Diane Court’s window, his boom box held high, serenading her with Peter Gabriel’s In Your Eyes. In Watchung, NJ at Blue Star movie theater. Sigh. It was a moment of cinematic grand gesture history that still stands the test of time today. Of course, Lloyd Dobler and his amazing arm strength—I mean, holding up that radio for the entire length of the song had to be tough!—isn’t the first grand gesture on the silver screen. But, c’mon, it is one of the most memorable. It set a romantic bar for a generation!

I’m a devout lover of the grand gesture. I know the bigger they are, the higher the percentage of eye rolls and “Whaevs!” but I just don’t find them corny. As a reader of romance books, I’ve come to expect this act in the final pages. It isn’t always the ostentatious public displays or declarations of love that get me. It’s the smaller, quieter, equally as heartfelt confessions and pleas for forgiveness that have me clutching my pearls as well. Whether the gesture is in front of an entire Catskills resort packed with snobby rich people or in the long driveway of a girl under a moon with only her and her father as witnesses, it’s the baring of a soul that makes the act so powerful. The heart and emotion behind it. The vulnerability of a person who is willing to take a risk of being rejected and having their heart broken if love is the prize. It’s the sacrifice that makes a grand gesture worthy as much as the how.

In A Millionaire at Midnight, Book 4 in the Bachelor Auction series and my new release from Entangled Publishing, reserved, broody Alexander Bishop does a grand gesture at the end to win Morgan Lett back. I won’t spoil the ending, but a very public—and humorous, if I must say so myself—declaration was involved, which for him, was a sacrifice because he is a private person. It was one of my faves to write, but I’ve seen some awesome grand gestures in my time. Care to find out what they are? I knew you did, so I went ahead and made a list! I’m accommodating like that. Hee-hee!

1. Say Anything. ‘Nuff said. Boom box. Peter Gabriel. One of the most romantic songs evah. I mean, “In your eyes, I see the resolution of a thousand searches.” I just threw my panties at my own computer screen!

2. Dirty Dancing. As you might have guessed from the Catskills resort clue from above. “Nobody puts Baby in the corner,” and then the closing night dance of a lifetime that, literally, had the whole place on its feet. What made this so great was Johnny came back for her and brought her up on that stage to not just show everyone that she was his woman, but to show Baby that she was his woman. And that he was willing to claim her right back in front of her father, God and country. Now that’s a grand gesture!

3. Pretty Woman. Noooooo! Don’t roll your eyes! “Viviaaaaaan!” Edward rolling up to that crappy apartment building in a stretch limo with a bouquet of flowers, standing up in that sun roof and yelling her name in the middle of a sketchy part of town? Yahs! Catnip for my soul! But, to be honest, the true grand gesture was him—who was terrified of heights—climbing that fire escape to the top floor to get his woman. Sigh. Classic.

4. Never Been Kissed. Not only was this a wonderful, hilarious movie, but it has one of the best grand gestures ever! When Josie Geller put it all on the line—and in the newspaper—that she was going to wait for five minutes on the pitcher’s mound during the baseball team’s championship game for Sam to come give her that first kiss, we all held our breath, right? She put herself out there like a…well, champ. Okay, you saw that coming! A shy, introvert who confessed to all ‘n’ sundry about not just her subterfuge as a high school student, and how she hurt this teacher and the man she loved, but also that she’d never been kissed? Oh yeah, she risked her pride and heart for this man. And when he ran down those steps seconds after the clock ran out? I’m up here cheering right now…

5. 16 Candles. This is an example of that smaller, quieter grand gesture I mentioned. Who didn’t swoon when Jake showed up at the church to pick up Sam? No one from school was there to witness it. Except for her father, even her crazy family didn’t notice! But he came to pick her up and share a special birthday cake with her—as well as return her undies. It was private and so incredibly sweet.

Your turn! Tell me your favorite grand gesture! Or if you don’t like them, tell me why. I’m choosing someone to win a $5 Amazon gift card and a copy of The Millionaire Makeover, Book 2 in the Bachelor Auction series. Just comment below and enter the rafflecopter for a chance to win! 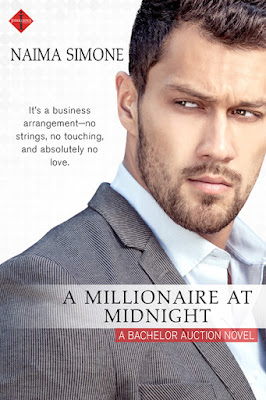 A Millionaire at Midnight

Boston socialite Morgan Lett is having a run of bad luck. Her fiancé just dumped her for her stepsister, the charity foundation she’s given her life to is in danger of folding, and now, the gorgeous man she bid on and won at a masquerade bachelor auction turns out to be a cold-hearted jerk…and her new employer.

Millionaire Alexander Bishop needs the best wife money can buy. In order to inherit his family business, he must get engaged—fast. And Morgan, with her beauty and pedigree, is the perfect candidate. Her sharp tongue may drive him crazy, but she needs money to save the foundation she loves, and he needs a fiancée. It’s a flawless arrangement—no strings, no love. But soon she has him craving more, and cursing the platonic terms of their agreement.

About the author:
Naima Simone’s love of romance was first stirred by Johanna Lindsey, Sandra Brown and Linda Howard many years ago. Well not that many. She is only eighteen…ish. Though her first attempt at a romance novel starring Ralph Tresvant from New Edition never saw the light of day, her love of romance, reading and writing has endured. Published since 2009, she spends her days—and nights— creating stories of unique men and women who experience the first bites of desire, the dizzying heights of passion, and the tender, healing heat of love.

She is wife to Superman, or his non-Kryptonian, less bullet proof equivalent, and mother to the most awesome kids ever. They all live in perfect, sometimes domestically-challenged bliss in the southern United States.