Congratulations to "Kay", the winner in Sheryl's giveaway. Thank you to all who participated!

I have to confess that I'm a bit of a crime junkie – I've followed big-name cases, bought the books and watched the documentaries over and over again. It's a lovely addiction, trying to second-guess the official police investigations and see if I can come up with the same conclusions or if I disagree, going off on my own path.

And I've played the what-if game, what if the people involved in these horrible situations had someone to turn to, some group that could cut through all the red tape and restrictions working at times to keep the criminals safe. So when I had the opportunity to create a series of rough, tough men who did what no one else dared to do, I jumped at it! Enter the Delta Force Brotherhood – men who do what needs to be done to get justice.

They're not mercenaries, they can't be bought for any price. But if they take your case you can be assured they'll do the best they can to finish the mission and give you what you wanted, what you needed no matter what.

I was thrilled to write the first book in the series, The Blind Bet and hope you'll come along and meet the Brotherhood – men who aren't for sale at any price but who can lose their hearts if the right woman comes along.

It was hard to suppress the urge to drop onto the bed and pull her into his arms, to kiss the top of her head before moving on to kiss other parts of her body.
Strong. Smart. Sexy.
He couldn’t fault her reasoning, no matter how much he wanted to. She’d seen an injustice inflicted on her family and tried to work within the system to right the wrong. But when she couldn’t, she’d pursued her own path.
Much like he and his men did.
Dylan pushed the thought away. There’d be time later to ruminate on Jessie Lyon and what part she could have in his life. Right now they needed to get up to Mount Charleston, to the cabin the Brotherhood kept for retreats.
He went to the front of the trailer, away from temptation.
A pair of headlights illuminated the small road sign at the end of the lane for a few seconds before going black.
Dylan reached out and flicked the light switch, plunging them into darkness. He peered out the window as the car turned down the road, the engine going silent.
Could be somebody with a wonky car, the engine cutting out and the driver hoping for enough momentum to coast all the way home.
Could be something else.
The driver’s window came down as the car came level with the darkened trailer and something flew out.
It wasn’t a flurry of bullets.
It was much, much worse. 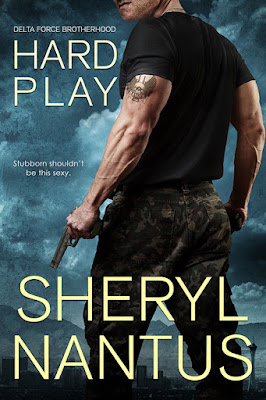 Ex-special forces ranger Dylan McCourt is a stone cold killer who cares only about his military brothers and doing what’s right. He’s used to giving orders and has zero patience for bullshit. Most people tremble when they look him in the eye, but not his infuriatingly sexy new rescue mission, Jessie Lyon. She just juts her chin and says she’s not leaving without clearing her father’s name, to hell with his rules. And was that a one finger salute he sees in her eyes or his imagination? Either way, he knows this is one job his training might not have prepared him for.

For fans of Maya Banks’ KGI series, prepare to meet the men of the Delta Force Brotherhood, a sexy new contemporary series where kicking ass and living hard is just how they roll.

About the author:
Sheryl Nantus was born in Montreal, Canada and grew up in Toronto, Canada. She met Martin Nantus through the online fanfiction community in 1993 and moved to the United States in 2000 in order to marry. A firm believer in the healing properties of peppermint and chai tea she continues to write short stories and novels while searching for the perfect cuppa.