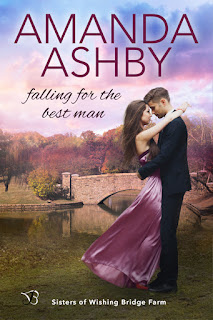 Ever since I saw the movie, Bridges of Madison County I’ve been obsessed with covered bridges. There’s something quite otherworldly about them and of course in story telling, crossing a bridge is a bit like crossing a threshold into another world. But it wasn’t until I started my new series and wanted some kind of wishing well that I suddenly realized how perfectly a covered bridge would work.

What I like best about the idea of a wishing bridge isn’t that it has magical powers that automatically makes the impossible happen. Instead it’s a place where people can secretly say what’s in their heart or consider what their perfect world would look like.

I think there’s something quite special about admitting the truth, even if it is just to a covered bridge! What’s even better is for those people to realize that their wishes can definitely come true, even if it’s not quite the way they expected.

In Falling for the Best Man, wedding planner Emmy Watson just wants to stay at Wishing Bridge Farm where it’s safe, but by the end of the book she starts to question if she needs a farm to feel safe, or can that feeling come from somewhere or someone else. As for the hero, Christopher, he thinks his wish is kiss Emmy. A lot. But really it’s a lot deeper than that. He wishes to not turn out like his father. And of course I’d like to tell you that the bridge makes it all come true, but that would be telling!

I’d love to know if anyone has made a wish at a fountain, well or any other special place, and if that wish came true?

Giveaway:
Amanda will be giving away two Ebook Copies of DATING THE GUY UPSTAIRS 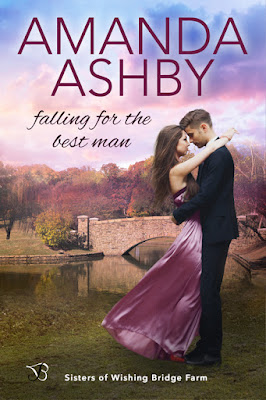 What's worse than running into your ex-hookup at the airport? When said 'hookup" is the best man for the most important wedding of your career, and he's on the hunt for a fake girlfriend. Between a hysterical bride and a wedding party gone wild, wedding planner Emmy Watson can’t afford any more disasters if she wants to save her beloved Wishing Bridge Farm. Which is why she puts the best man on lockdown. Unfortunately, he also happens to be the one guy who can make her forget everything except the way his kisses make her feel.

All Christopher Henderson needs is a fake girlfriend to convince his bosses that his bad boy reputation is a thing of the past so he can land his dream job. What better place to find said companion than at a wholesome vintage wedding. The only thing he didn't count on was seeing Emmy, the woman who dumped him. The one he hasn’t been able to get off his mind.

There's no denying the spark between them, but he’s a globetrotter and she’s a homebody, and falling in love is something neither of them has in their plans.

Author Info
Amanda Ashby was born in Australia but now lives in New Zealand where she writes romance, young adult and middle grade books. She also works in a library, owns far too many vintage tablecloths and likes to delight her family by constantly rearranging the furniture.

She has a degree in English and Journalism from the University of Queensland and is married with two children. Her debut book was nominated for a Romantic Times Reviewers Choice award, and her first young adult book was listed in the New York Public Library Stuff for the Teen Age.  Because she’s mysterious she also writes middle grade books under the name, Catherine Holt and hopes that all this writing won’t interfere with her Netflix schedule.

Giveaway ends 11:59pm EST January 10th. Please supply your email in the post. You may use spaces or full text for security. (ex. jsmith at gmail dot com) If you do not wish to supply your email, or have trouble posting, please email maureen@JustContemporaryRomance.com with a subject title of JCR GIVEAWAY to be entered in the current giveaway.
Posted by Maureen A. Miller at 12:30 AM