Hello, Readers – I’m thrilled that Just Contemporary Romance invited me to stop in to share a book birthday with you! 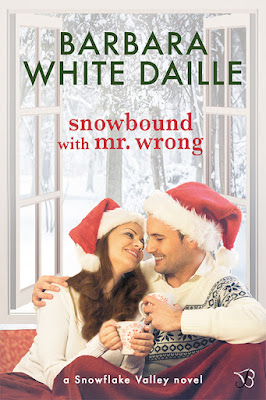 Today is the official release day of Snowbound with Mr. Wrong, the first book in my Snowflake Valley series from Entangled Bliss. Of course, I know we haven’t celebrated Thanksgiving yet, but this week…this month…I’m all about Christmas. :)

And I love that I’m in the mood to decorate early.

My husband and I put up a tree every year, the same tree taken from the same box it has lived in during most of the years we’ve been married. It may be a little on the small side, but it’s definitely not a Charlie Brown Christmas tree. It’s a well-loved and welcome sight in our living room.

We’ve tried setting it up in different places in the room, but it seems we always wind up deciding it looks best on the same wall in the spot it stands in every year. Sometimes I tell myself I’m just a creature of habit! Then I stop and realize that where the tree goes is almost as important as what goes on it.

Because putting the tree in the same place and setting the same lighted star on top and adding the familiar ornaments on and beneath it are traditions my husband and I have created. And family traditions are a very important part of any holiday.

I love handmade decorations, especially at Christmastime. Lyssa, the heroine of Snowbound with Mr. Wrong, shares that love and—even though she’s stranded on a mountainside—she manages to add that element into the story. This clip is from the point of view of our hero, Nick:

“Do you think Santa likes my stocking?” Tommy asked.

The kid emphasized the word, as if someone here had already insulted his work. “I’m sure he’ll like it. In fact, you’re doing such a great job, I think you should make my stocking, too.”

“But Santa doesn’t—” The boy cut himself off and put his head down over his work again.

“When we get back to civilization,” Nick said, “we’ll need to make a shopping trip.”

That caught Mollie’s attention, though she looked up without a word.

It caught Lyssa’s attention, too, judging by the way her hand holding the needle had frozen in midair. Already he could tell she was forming objections to his plan. No matter what he did, he couldn’t seem to please her.

“Christmas presents for all your parents.”

“But I told…I told Santa I made a card.”

“And that’s very nice. But there’s no reason you can’t give your mom and dad a present, too.”

“Make how?” Tommy demanded. “And what’s a ormer…that thing you said?”

“It’s a decoration for your Christmas tree. We’ll make them with a very special recipe I have for clay. We use flour and salt and glue and food coloring. Just like you do in school with Miss Barnett, right, Mollie?”

The girl shrugged and stabbed her stocking again.

This time, Nick didn’t blame her. The thought of having to make a stocking had been bad enough. And now, this?

Lyssa was going to great lengths to keep the kids occupied. He had a sneaking suspicion her efforts were also aimed at making sure he and she didn’t get to spend any time alone. After last night, he couldn’t blame her.

Yet even the fresh wave of guilt he felt now couldn’t keep him from wanting her.
~ ~
One of the most cherished ornaments on our tree is the one my parents gave us the first Christmas we were married.

Then there are the ornaments and decorations we’ve collected as a couple. They’re all favorites of ours, too, and it doesn’t matter whether we bought them as keepsakes of a great vacation or to celebrate a special occasion, or even if we’ve just picked them up at local holiday craft bazaars.

What’s your favorite ornament or holiday decoration? Mention it in a comment below, then enter the Rafflecopter. Your name will be included for a chance to win one of the giveaways:  a $10.00 Amazon gift card or a $10.00 Starbucks gift card (US mailing addresses to enter). Winners’ names will be posted in a comment here at the blog on Nov. 14th. 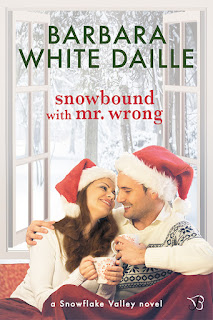 Worst. Day. Ever. After Lyssa Barnett’s sister tricks her into reprising her role at Snowflake Valley's annual children's party, she doesn’t think anything can be worse than squeezing into her too-small elf costume. Then tall, dark, and way too handsome Nick Tavlock shows up to play Santa…and an unexpected storm leaves them snowbound in the isolated lodge.

The last thing Nick wants is to spend a cozy Christmas Eve with a trio of kids and the woman who dumped him. But as much as Lyssa frustrates him, he can't stop thinking about her. And soon, he's fighting very un-Santa-like thoughts of kissing a certain sexy Miss Elf under the mistletoe. As Nick starts to fall for Lyssa all over again, he knows it will take nothing short of a miracle to have Lyssa in his arms on Christmas Day.

About Barbara:
Barbara White Daille is an award-winning author whose short contemporary romances have received Top Picks and glowing reviews from both print and online publications. Her writing has been compared to that of authors such as Deborah Smith and Catherine Anderson, among others. Her books focus on small-town settings, where the heroes and heroines’ lives are filled with family and friends, lots of nosy neighbors, and often a matchmaker—or three.

Barbara has been a writer since before she could spell all the words needed to tell her stories. She “self-published” her first short story in fourth grade and wrote her first novel (a mystery with a romance included!) in eighth grade.
Writing is Barbara’s passion, and reading is her favorite pastime. She hopes her stories bring readers just as much pleasure and that her books find homes on those readers’ keeper shelves.

She and her husband live in the hot and sunny Southwest, where they don’t mind the lizards in the front yard but could do without the scorpions in the bathroom.