Thank you so much for having me over! I hope you enjoy this exclusive peek at when Lucas and Ruby first meet in Her Enemy Protector! xoxo, Avery 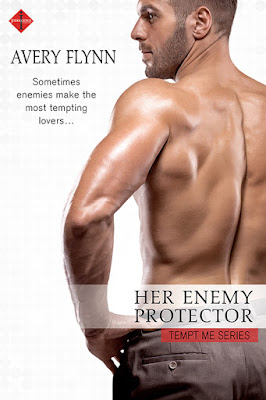 By-the-book secret agent Lucas Bendtsen will do anything to keep his country safe—even if that means blackmailing the stepdaughter of a notorious mobster who is about to sell guns to a group of terrorists. The plan? He'll pose as her fiancé in order to access her stepfather's guarded compound and find out the location of the arms deal. The problem? Despite her reputation as a heartless femme fatale, Ruby Macintosh is not at all what she seems.

Only a fool would double-cross the Organization, but Ruby doesn't have any choice—not if she's going to save her brother and mother from her stepfather. So she places her life in the hands of a man who turns her on as much as he ticks her off…

The fake engagement may be the beginning of a high-stakes game of subterfuge, but when their hearts get involved, Lucas has to decide whether to break the rules or break Ruby's heart.

As Ruby filled one of the tiny cups with tea, Lucas took the opportunity to better size her up. She was not what he expected. Creative types were always a little bit…different, but she was a study in contradictions. She’d kept her natural honey-wheat colored hair, but it was streaked with thick swaths of pink, blue, and purple. The prim and proper white dress she wore managed to hug her every sinful curve but was set off with a worn leather jacket and the hint of a tattoo starting on her wrist and disappearing up her sleeve. Then there was her face, with its almost innocent beauty punctuated with glossy, hot-pink lips that would give a priest dirty thoughts.
“Do you take sugar?” she asked, interrupting his perusal and giving him a knowing look.
Blood rushed south in anticipation. “No.”
“Too bad.” She handed him the cup on a saucer, brushing her finger across his in the process and making his skin tingle. “I think you could use some sweetness in your life.”
Obviously she was toying with him, playing her games that had always netted her a prize before. No woman—no matter how tempting—would ever tug his attention away from his ultimate goal. Elskov’s safety hung in the balance. Lucas wouldn’t be responsible for the chaos that would ensue if Gregers Henriksen got his hands on enough weapons to start an ugly, guerrilla-style war.
Sitting back and crossing one ankle across his knee, he kept his face neutral. “Are you lecturing me or trying to taunt me into changing my mind?”
“Neither,” she said. “I was making an observation.”
He took a sip of tea, which did taste more bitter than usual—a fact that only annoyed him more. “Well, you can keep them to yourself during this operation.”
“That will be easy.” Her posture perfect and her chin tipped upward, Ruby took a drink. “I’m going to finish my tea and then walk out of this house forever. I won’t be a part of whatever it is you have planned.”

Award-winning romance author Avery Flynn has three slightly-wild children, loves a hockey-addicted husband and is desperately hoping someone invents the coffee IV drip. Avery was a reader before she was a writer and hopes to always be both. She loves to write about smartass alpha heroes who are as good with a quip as they are with their *ahem* other God-given talents. Her heroines are feisty, fierce and fantastic. Brainy and brave, these ladies know how to stand on their own two feet and knock the bad guys off theirs.