Congratulations to "Bn100", the winner in Kris's giveaway. Thank you to all who participated!

Clive Barker once gave an interview (I believe on Charlie Rose) where he said the worst thing he did as a writer was major in English. He then went on to discuss how it gave him a sort of writer’s block.  The details of why is fuzzy all these years later, but that interview played a major role in my life as a writer.  I bailed on a Boston University full scholarship, with the option to major in English, because I feared what it would take from me, that it might make me one of many.  Full disclosure, I now believe the whole thing is garbage.  I probably should have stayed at BU, got that English degree, and probably would have cracked the code of the publishing years earlier, but then as most things in life, if you change one chess move, you change the outcome of the game.  I love my life and wouldn’t change it.  I am my choices.  And Clive still lives in my head—the Clive I remember talking to Charlie—and he tells me to protect my voice, protect my unique vision of a story.  If I have one credo for writing, that’s it. 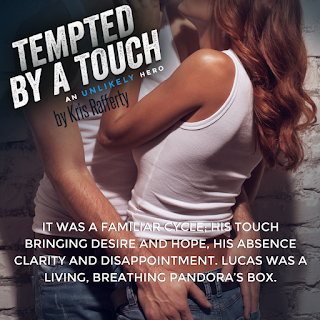 From Tempted By a Touch:

“What are you doing?” she said.

A trick question. He was either waiting for her to gather the courage to meet the evil fuck that was Joseph Folsom, a disgraced cop, murderer, kidnapper, and friend, or he was waiting to congratulate her on the decision to back out of the meeting.  He supposed either wouldn’t be kind to point out, so he equivocated. “Enjoying the breeze and your gardens.  It’s much better than waiting downtown under fluorescent lights, smelling day-old coffee in a littered conference room.” He took a cleansing breath and stretched his neck.  The scent of freshly mown grass was competing with the roses perfuming the air. “This neighborhood is great.”

She arched a brow, clearly skeptical. “Kids playing outside? Lawn mowing? Ice cream trucks? It’s a family neighborhood. Careful, Lucas, it might give you the hives.”

He smiled, wondering if she were right. She could be. No one knew Lucas better than Harper. That’s why it was a blow when she left. “Seems nice enough.” Right out of a 1950s sitcom. Unreal. Glancing at his watch, he knew time was getting tight, and the porch stairs weren’t becoming any more comfortable. “Ready to go?”  He hoped she’d take this chance to back out of the meeting.  “Or stay.”

He sighed, knowing if he pressed too hard, she’d dig in and stop listening to him altogether.  His best bet was to bide his time and work on her during the trip downtown.  She stood, hung her leather pocketbook over her shoulder, and led him down the walkway and through the gate. As was his habit, he surveyed the neighborhood as he hurried her to the street and the passenger side of his car. He wanted to say something to ease the tension, but Harper beat him to the punch.

“I see you finally gave her a new paint job.” Harper ran her fingers along the sleek lines of his Chevy, reminding him it wasn’t so long ago she’d caressed him with such studied attention. He wondered if she’d triggered his memories on purpose, but then a quick study of her expression told him he was suffering from wishful thinking. She was oblivious and he was resigned and disappointed by that reality.

“The Chevy’s a work in progress.” The new black paint, two white stripes down the hood’s center, hid delayed maintenance, but one day Lucas would make the innards as beautiful.  He gripped the passenger door’s handle, about to open it for her, when a breeze wafted the scent of her new shampoo toward him, distracting him long enough to morph his glance into a stare. Harper noticed, flushed, and looked away.

“A work in progress. Are you going to open the door or do you want me to wrestle you for it?”

Lucas realized he was still holding the handle.  He popped the door open and stood back, thinking it unfair only he was affected by their close proximity, only he felt the electricity in the air. His body thrummed with it. He was grateful she took care not to brush against him as she entered the car, sitting in the bucket seat. He wouldn’t have been able to handled that. 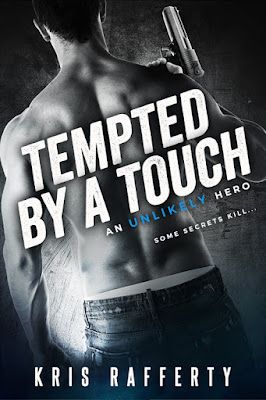 People keep dying around Harper MacLain. Try as she might, she can’t stop bad things from happening to those she loves. When her closely guarded secret lands her in the middle of her ex-boyfriend’s investigation, she’s in over her head. She hates that Detective Lucas Sullivan is in her life again, tempting her to fall back into bad habits…and his bed.

When Harper left him, Lucas tried not to care, burying himself in his job instead. Then Harper became the job. Now they’re on the run, and all he can think about is keeping her safe…and his hands off her. Lucas knows she's the key to solving his case, if he can keep them alive long enough to do it. And that's the trick...because falling in love can kill you.

Author bio:
Kris Rafferty was born in Cambridge, Massachusetts. After earning a Bachelor’s in Arts from the University of Massachusetts/ Boston, she married her college sweetheart, traveled the country and wrote books.  Three children and a Pomeranian/Shih Tzu mutt later, she spends her days devoting her life to her family and her craft.