My rules for writing romance

I have very definite rules when writing romance. My books have to contain the following elements:


·      Realistic heroes and heroines — people who are just like us, and who find themselves on the magic journey of falling in love

·      No business moguls, no billionaires — just intelligent men and women who feel passionately about what they do

·      Fascinating settings — an archaeological site in Turkey (The Turkish Affair), a backwoods Nevada community (All About Charming Alice), an abandoned stretch of California coast (Felicity’s Power), or the bright lights of the country music world (A Swan’s Sweet Song)

·      And, like in any good book, information that allows readers to learn new things (about archaeology, or snakes, or the origins of country music, or foreign aid)

When writing my contemporary romantic suspense, The Turkish Affair, I added yet another set of rules: 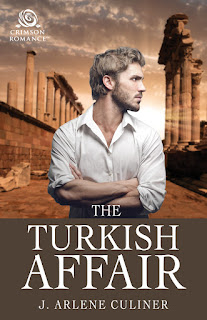 Because I had to create tension without those usual tools, I needed real people with authentic problems; a plot based on what really does happen in the antiques world; an unstable political situation; untrustworthy and corrupt characters; a hostile environment.

In The Turkish Affair, my heroine Anne, a translator working in backwoods Turkey, has let a failed marriage and a scandalous affair turn her into a fearful person. Now, again faced with disgrace, she has a choice: she can run away, or she can find her lost courage, discover who is trying to frame her.

My hero, Renaud, is passionate about his work as an archaeologist, about traveling around the world and discovering lost civilizations. He loves and appreciates women, but is determined to stay uninvolved: women need security and a comfortable home base, and that would be too much of a sacrifice for him.

The door opened. Anne looked up. And froze. Speak of the wolf and you see his tail.
Renaud Townsend. She stared at his long, tight body, the tousle of sun-bleached hair. Noted again his casual, elegant saunter as he entered. Remarkable. But what was he doing here? What mad coincidence had brought him to Necmettin’s café? And now that he was here, how could she avoid him? Get up and go home? Her fingers inched toward her purse strap in preparation for the getaway, while she lowered her head and pretended to read. But,
despite her desire not to look, she couldn’t help glancing up.
He was watching her.
Their eyes locked. Time became fluid, spilled out into a long, loose eternity.
Until, finally, he was moving again, easing his way toward her, stopping beside her
table, his blue eyes radiating intimacy.
Intimacy she didn’t need. Or want.
“Hello.” His voice was warm, coaxing. Very different from the tone she’d heard this
morning.
Speech temporarily deserted her. His eyes scanned her mouth slowly, and her throat
closed. His gaze was as intimate as a caress.
“I’m happy I’ve run into you again.”
He meant it; she saw that. Did it mean he’d been looking for her? Combing the scruffy
town until he found her? Ridiculous. Why be preoccupied by a woman he’d met only
briefly?
“I want to apologize for my rudeness at the site this morning. I felt guilty all
afternoon.”
She stared at him blankly. Humility was the last thing she’d expected. She fought her
curiosity … and lost the fight. “Guilty?” He didn’t look like the sort of man who’d know
what the word meant. She had him pegged; she knew his type. He was a man who helped
himself to what he wanted and ignored the rest. As easy to read as a fluorescent billboard.
He nodded. “Please, let me explain.”
But he didn’t look quite so sure of himself now. And she felt herself relenting. “You
don’t have to explain anything.”
“Of course I don’t have to.” His lips twitched into a faint smile. “I want to. My
behavior was offensive.”
She forced herself to shrug, as if his explanation didn’t matter to her. She had to
discourage him, because friendliness was the last thing she needed from him. Arrogance
she could deal with; it would be easy keeping him at arm’s length with that. But warmth?
Sympathy? She didn’t think she was strong enough to handle those, not when his very
presence excited her, made her want to open up to him. “Explanations really aren’t
necessary, Mr. Townsend. Please don’t bother—”
“Not Mr. Townsend. Renaud. Just Renaud and Anne, okay?”
How calm, how vibrant his voice was. There wasn’t the slightest trace of the
aggression she’d heard this morning. And first names were too intimate. She wanted to
stop him, say, “I don’t want you in my territory. You spell trouble.” She didn’t want
complications and emotional upheaval. Those would churn up her daily life, turn it into
complete misery.
Yet it was a nice name. Renaud. She tried the weight of it in a part of her mind.
“Yes,” she heard her own traitorous mouth murmur.
He indicated the second chair at Anne’s small table. “Mind if I sit?”
Of course she minded. Or did she have a mind left at all? She shook her head. He’d
traded in the tight T-shirt for a loose, beige shirt that managed to suggest all the tight
muscles it hid. He still wore jeans, though. Tight, worn jeans outlining his thighs. His hair
had been brushed back into a semblance of order, but a few unruly curls invited her
fingers to touch.
“It’s the first time I’ve been on a site in Turkey. I know nothing about local customs; I
don’t speak a word of the language. And having responsibility for the site dropped onto
my shoulders only days ago made me less than pleasant this morning.”
“I wasn’t particularly charming either.” She hadn’t wanted to say that. Oh, why was he
making her say things she’d had no intention of admitting? The last thing she should be
doing was encouraging him, opening the door to easy conversation.
“Call it revenge.” 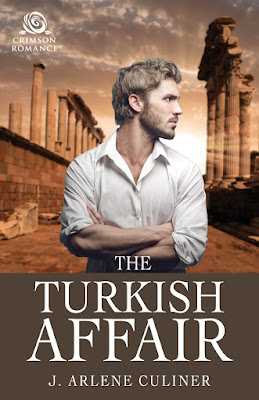 Danger at the ancient Hittite site of Karakuyu

A top notch Washington journalist before a liaison with the wrong man implicated her in scandal, Anne Pierson has been hiding in backwoods Turkey and working as a translator. She’s determined to keep her past a secret, to avoid personal relationships. But after meeting Renaud Townsend, her discrete little world is turned upside down.

Archaeologist Renaud Townsend is troubled by Anne Pierson’s refusal to talk about her past, but instinct tells him he can rely on her. Or is it only desire speaking? A lusty love affair for the duration of the summer dig is a very appealing idea.

When Anne’s bad reputation links her to stolen artefacts and murder, the budding romance with Renaud comes to a halt. If they learn to trust one another, her name can be cleared. But is there still enough intensity to give love a second chance?

Giveaway:
Arlene will be giving away an ecopy of THE TURKISH AFFAIR to one lucky person leaving a comment or email entry.


Born in New York, raised in Toronto, J. Arlene Culiner has spent most of her life in England, Germany, Turkey, Greece, Hungary and the Sahara. She now resides in a 400-year-old former inn in a French village of no interest and, much to public dismay, protects all creatures, especially spiders and snakes. She works as an actress, a photographer, a contemporary artist, a musician, writes mysteries, history books and perfectly believable romances. Her heroines are funny and gutsy; her heroes, dashingly lovable; and all are (proudly) over the age of forty.

Giveaway ends 11:59pm EST Oct. 21st. Please supply your email in the post. You may use spaces or full text for security. (ex. jsmith at gmail dot com) If you do not wish to supply your email, or have trouble posting, please email maureen@JustContemporaryRomance.com with a subject title of JCR GIVEAWAY to be entered in the current giveaway. US residents only.
Posted by Maureen A. Miller at 12:30 AM