I love all romance and have written the entire gamut from historical to contemporary to futuristic.  But there are some things I especially enjoy about contemporary.  To celebrate the release of my new book from Entangled Lovestruck, Just one Week, let me outline some of the best things about contemporary romance.

First, today’s woman has so much more freedom and opportunity than women did even in our recent past.  She’s likely to have a career and her own identity independent of the man in her life.  She’s not Mrs. Someone else.  She’s Ms. and retains her own name, thank you.  She can walk away from a suitor or stay…her choice.

In previous eras, a woman’s virginity defined her value as a human being.  If she wasn’t “unsullied,” she wasn’t worth anything.  Think about the word “sullied.”  It suggests that if a woman has had sex, she’s dirty…broken beyond repair.  What a narrow-minded, hateful way to think of a human being.  Today’s woman would laugh at such a proposition.

Today’s woman is also freer to express her sexuality.  We now have effective means of contraception.  A woman needn’t worry that each sexual encounter might result in a pregnancy, and this fact allows her to truly enjoy herself.  Furthermore, society’s values about female sexuality have changed.  Today we expect women to enjoy sex at least as much as their partners.  A woman expects to have orgasms.  This makes the love scenes especially fulfilling because they’re free of the guilt and shame heaped on women in the past.

Which brings us to the question of condoms.  People have had condoms for much longer than we imagine—going back into the 19th Century—but we don’t normally read about them in historical romances.  In contemporaries we always have to grapple with the problem of to wear one or not to wear one.  Wearing a condom shows the people are responsible concerning STD’s.  On the other hand, they’re not particularly romantic, and some people don’t want the fantasy ruined.  I see the merits of both sides of the argument and usually defer to the publisher on this subject.  (BTW, there are condoms in Just One Week.)

Aside from the issue of women’s freedom, sexual and otherwise, there are practical advantages to writing in the present day.  Telephones, for example.  These days we carry them with us wherever we go.  We also have airplanes.  Our characters can be in New York one day and Paris the next.  It’s easier to cook with modern appliances, and even the boy next door can whip up a gourmet delight for the heroine on the spur of the moment.  There are also massages, spas and hot tubs, and oversized beds.  Yum!

But if I had to choose the single best thing about living in the present day, I’d say without question “indoor plumbing.”  I don’t know how people in earlier time periods used the toilet.  Blissfully, we leave those details out of historical romances because they might well be fairly disgusting.

And baths.  In a historical romance, servants had to haul hot water in buckets to a bathtub set in the center of milady’s bedroom.  You’ll occasionally read that in a romance, but I’ve never read how the servants got all the water back out.  Did they scoop up as much as they could and carry it down stairs and then haul a nearly-empty tub down after?  Who wants to make their employees do all that?  Not I.  Nor do I want to live without my bath.
When it comes to ball gowns and carriages, historical romance is fun, but when you look at the reality of life, I’d rather spend it in the present day.


Alice Gaines loves to hear from readers at authoralicegaines@gmail.com.  Her blog is http://www.alicegaines.blogspot.com.  You can sign up for her newsletter there and enter to win one of her hand knitted projects. 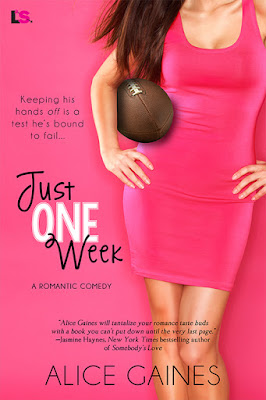 “Alice Gaines will tantalize your romance taste buds with a book you can’t put down until the very last page.” NYT bestselling author Jasmine Haynes

Her brother’s best friend is not only the hottest man Michelle Dennis has ever seen, he’s the one man she hopes to avoid after leaving town eight years ago. Of course he’s the one waiting at the airport. Worse, he made sure they’re staying in the same house.

Pro football player Alex Stafford is expecting to pick up his friend’s kid sister, not a full-fledged bombshell. He was planning to apologize for their past, but the feelings he had years ago come roaring back…and this time, there’s no denying them.

Keeping his hands off is a test he’s bound to fail—especially when they’re stuck in close quarters. But falling in love with Michelle, living in her world, isn’t an option for a guy like him. And remembering that will save them both a lot of heartache…

Author bio:
Alice Gaines loves her romance hot. She’s been writing since forever and has no plans to give it up.

Alice lives in the San Francisco Bay Area in a fixer-upper she never fixed up. When she’s not writing, you’ll find her knitting, crocheting, cooking, or vegetable gardening. Her main companions are her pet corn snake, Casper, and a collection of neglected orchids.

She loves to hear from readers at authoralicegaines@gmail.com. You can join her newsletter at http://alicegaines.blogspot.com/. She periodically gives out her handmade items to people on her mailing list.