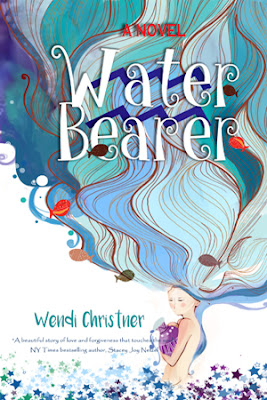 One last summer together forever changes the lives of best friends in a small Southern community. These unforgettable characters and their moving story linger long beyond the final page.

She let him lead her to what resembled a bench-shaped topiary. Undoubtedly, it was one of the trusses not completely destroyed by the fire, now upholstered by Mother Nature. He tested the timber’s stability with the toe then heel of his boot, then motioned for her to sit. They sat together, neither speaking until Cassidy steadied her breath.

The place was nothing like the inferno of her dreams. The damp moss was cool to the touch. Birds chirped, a lizard scampered over a stack of bricks, and water pooled in the uneven concrete foundation.

“Why did you bring me here?”

In her palm, he placed a chain with a small silver medallion of a bare-chested man balanced on the flayed tail of a mermaid and an urn tipped over his shoulder. The silver had tarnished and the edges were rubbed with wear. Cassidy had seen the zodiac charm a million times. It had belonged to Jared’s mother. He’d worn it since they were kids, never once taking it off.

“I’m a Leo.” Her voice was as soft as the breeze that brushed the grasses on the hill.

“I know.” He lifted the medallion from her hand. “This is my sign. I thought maybe you could use it more than me.”

She swallowed the lump that had risen in her throat.

“Aquarius is the Water Bearer,” he said, reaching behind her neck to clasp the chain. His fingers brushed her skin, leaving goosebumps. The chain settled into place, and the medallion dropped like a quarter between her breasts. The warmth of his touch still lingered on the silver, and her heart swelled.

At that moment, she understood what it would mean to leave Jared behind. She fought for a witty comment, something to break the tension, something to make them laugh. But she could only stare at the gift he had given her, blurred by the tears burning her eyes.

He reached for her hand again. His thumb massaged the ridges of her knuckles, and he squeezed as if he’d never let go. “When you’re ready to put this fire out, maybe you can come back home.”

Wendi Christner Bio
Wendi Christner is the author of Writer’s Digest Short-Short Story Competition winner “Throwing Stones,” a fairy self-help book, and several novels written under various pseudonyms. Her gritty, emotional stories tend to have a Southern voice born of her roots in the Florida panhandle. She currently lives in Tampa with her husband, son, and their fur family.