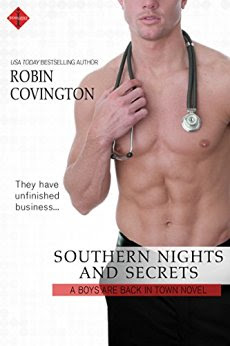 A Boys Are Back In Town Novel

Being a doctor is everything to me, but I’m not going to let bureaucrats tell me how to practice medicine. It’s about saving lives no matter what, screw them and their paperwork.

When the one woman I could never forget, Ginger Crawford, shows up as my boss all bets are off. The heat between us is tough to ignore but I have to if I want a future at this hospital. It isn’t easy. Every time we argue, I want her even more.

But I’ve got secrets she can never know, and she’s always going to be way too good for me. So it’s best if she hates me…at least that’s what I keep telling myself.

Chapter One
Beck was going to f**king kill somebody.

Yes, as a doctor he’d taken an oath to “do no harm,” but whoever had taken a boot to a little boy and sent him to this Level One Trauma Center deserved to get a fast track to hell. Beck would be happy to help get him there, but first he had to make sure this kid didn’t get there first.

“Come on, buddy. Work with me here.” He flicked a glance up at the monitors, noting the stats and tracking the kid’s vitals while he figured out what exactly had happened to him.
Although, he had a pretty good idea.

The kid’s caramel-colored skin was covered in old bruises—mostly where they wouldn’t show under regular clothing—with evidence of fresh ones festering under his clammy flesh. The boy had finally settled down with the morphine, but he moaned when Beck hit a tender spot. It was a damn sight better than the pitiful crying and screaming he’d done when they first rolled him into the ER of the Shenandoah Regional Medical Center.

“What’s his name?” Beck asked Tricia, the nurse beside him as he continued to assess his injuries.

“Marcus. He’s ten years old,” she answered with a tight edge to her tone. They saw a lot in this job, but kids were the worst.

“Okay Marcus. I’m gonna feel around your tummy and see what’s going on.” Beck palpated the bloated area knowing he’d feel the telltale signs of internal bleeding and winced when the boy lurched a little under the restraints and cried out for his mama. Beck wasted no time turning to the other nurse hovering just over his shoulder. “Keep pushing the IV fluids, normal saline ‘wide open’ and O neg blood until we get back his type. Call for a trauma surgeon, open an OR, and type and cross for four to six units packed red blood cells.”

The nurse acknowledged his order and scurried off to get the OR ready for Marcus. Beck glanced at the monitor, disliking how his blood pressure wasn’t holding steady. Not surprising when a patient was losing a lot of blood, but not something to f**k around with, either.

“Dose him with dopamine to counteract the BP issues and call to get the sheriff here as soon as possible,” Beck barked out, too tired after a full shift to even try to be charming. When no one moved he glared at another nurse standing by as if waiting for an invitation to do her job. “Wake up and get moving. Now.”

Trish glanced over her shoulder as her colleague scurried off before giving Beck a sour look from the other side of the table. “Dr. Sutherland. Didn’t your mama ever tell you that you get more flies with honey than vinegar?”

“My mama didn’t stick around long enough to teach me shit, and you know my tongue can be mighty sweet when I want it to be.” And she did. He’d spent a few nights in her bed keeping her up way past curfew and then making her late for work in the morning. He checked the monitor again. The numbers weren’t getting any better. “Help me get him intubated. I’m worried about his breathing.”

“Yes.” Trish worked efficiently as she talked, gathering the necessary equipment and moving alongside Beck at the head of Marcus’s stretcher. “You know hospital policy is to inform administration before we call law enforcement except in the case of emergent circumstances.”

“I’ll let the people in the adminisphere know as soon as I save this kid’s life and make sure the asshole who brought him gets a hard look from the cops.” He pointed to a couple of fresh bruises, the abrasion on the skin perfectly matching the tread of a boot, before getting in position to put the breathing tube into his young patient. “I got a look at the guy who came in with Marcus’s mother. Angry and swinging his big dick around like he was daring somebody to question the dumbass story he gave about this kid falling off a swing set. I don’t want him to disappear.”

Tricia sighed, her hands moving swiftly to switch out the bag of fluids connected to the IV drip. “You don’t know he was the one who did this.”

“Yes. I do.” He knew firsthand what an abuser looked like when he was worried about getting caught. Over the years his sixth sense when it came to the shittier side of humanity had been honed to the accuracy of a GPS—more a curse than a gift—but he knew what he knew. Marcus’s monitors suddenly started going off. Not in a good way. “F**k. He’s crashing.”

The sound of the Code Blue signal over the PA system was barely audible over the rush of blood in his veins and the roar in his ears as his own blood pressure rose while Marcus’s plummeted. Beck cleared the rolling carts away from the bedside as he got in position to start chest compressions just as the shrill alarm from the monitor sang out the flat notes that beckoned all the nearby angels to come and get the boy with a dimple in his right cheek and a “Phineas and Ferb” T-shirt.

“Marcus. I’m not letting you do this today, buddy.” Beck kept talking as he continued the chest compressions, stopping at each required interval to see if his patient had taken over the breathing part of getting through this ordeal. Beck watched the monitor. Nothing. He began a new set after Trish used the bag covering his mouth to give Marcus oxygen. “I’ve got a date with a sweet BASE jump and then this blonde I met at a dog park. I don’t have a dog because I work too many hours but I borrowed my buddy Teague’s new puppy and that dog brought all the pretty women over to me.”

Beck kept talking, convinced that Marcus was still nearby just waiting for a pull back to this life. Many patients had told him that they heard people talking to them as they hovered between life and death for him to doubt it.

The monitor blipped and stuttered for a few breathtaking seconds before the computerized mimic of the sweetest little heartbeat filled the space, and Beck eased back a little. He barely got a deep breath before the monitor went crazy again and all hell broke loose around him. Again.

“Is that OR ready?” he shouted, continuing the chest compressions as he hopped onto the gurney and straddled the stretcher, leaning over his young patient. It had been a couple of years since he’d “code surfed” but he wasn’t letting up on this kid until they got him to the OR. He’d learned the hard way that patients didn’t always make it if he didn’t stay with them.

She lives in Maryland with her handsome husband, her two brilliant children (they get it from her, of course!), and her beloved furbabies.