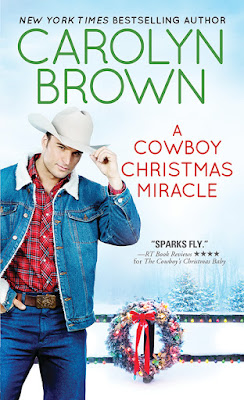 It will take a miracle bigger than the state of Texas for these two feuding families to survive the holidays!

The Brennans and the Gallaghers put aside their one-hundred-year feud every Tuesday for their weekly poker game. This week, the stakes are sky-high. Goaded to recklessness, Declan Brennan bets one thousand dollars that he can woo the next woman to walk into the saloon. A minute later, fiery-haired Betsy Gallagher pushes through the doors. If Declan can tame this wild Gallagher, he’ll have earned every penny.

If they don’t kill each other first…

Betsy can outshoot anybody in Burnt Boot and loves ranching more than anything—until she falls for Declan. He’s fallen for her too. But when she discovers what sparked their courtship, Declan will need a Christmas miracle to save his hide—and his heart.

NY Times and USA Today Bestselling author and RITA Finalist, Carolyn Brown, has published more than seventy books.  These days she is concentrating on her two loves:  women’s fiction and contemporary cowboy romance. She and her husband, a retired English teacher, make their home in southern Oklahoma.


Aggravated and angry, not to mention cold and downright frustrated, Declan sat down under the limp, bare limbs of the weeping willow tree and tossed a smooth rock out into the Red River. The moonlight lit up the peaks of the swirls that started small and grew outward to the bank. He picked up another rock and threw it the opposite direction, but a big fish flopped up out of the water and spoiled the circles before they reached the red-dirt sandbar.

He wanted—no, he needed desperately to talk to his sister, Leah, about this mess he’d backed into. But she’d probably tell him the same thing Quaid had, which was to give Tanner a thousand dollars and forget the whole thing. Declan shook his head slowly. He could not let a Gallagher win that easy.

He’d admired her since they were kids sitting on the opposite sides of the church. Her red hair, hanging in braids those days, had intrigued him. Those gorgeous emerald-green eyes mesmerized him, especially when they were teenagers. But she was a Gallagher, and that just didn’t mean no, you can not date her; it meant hell no, you will not even think such thoughts.

He looked up to see her silhouetted by the moonlight. Curves in all the right places, red hair flowing down her back, and yet he couldn’t believe his eyes.

“What the hell are you doing here this time of night?”

It was Betsy, all right. With that gravelly, sexy voice, there was no denying it.

“I might ask you the same thing,” he answered.

She pushed the branches aside and sat down, leaving a foot between them. “This is my thinkin’ place, and you have no right to be here.”

“I’ve never seen you here before so you are lying to me.”

“Cross my heart”—he made the sign over his chest—“and hope to die, I am not lying. I come here all the time. I guess Brennans and Gallaghers don’t usually think at the same time or our paths would have crossed before now.”

Talk about fate landing luck right in his lap.

This was Betsy Gallagher, not just someone who walked in the bar from off the street, and the very night that the bet had been made, she appeared at his favorite spot. It had to be an omen that he should proceed with the bet, didn’t it? A chilly north wind swept the sweet scent of perfume and beer mixed together toward him. He inhaled deeply and studied her with side-glances.

She hadn’t changed since they were in Sunday school together. But those curves and that sass were enough to drive a man to unholy thoughts.

Tomorrow, when Tanner thought about what he’d created, it would all change. He’d come crawling to Declan and hand him a thousand dollars, which would be twice what Declan had lost in the poker game that night. The bet would be off and the Brennans would save face, even though no one would ever know.

Declan was tempted to tell Betsy right then and there what had happened at the poker game. She already hated him because he was a Brennan, but he had made a promise that until the bet was settled, he wouldn’t tell. However, when Betsy found out that her favorite cousin had let it go on for even twenty-four hours, she’d shoot first and take names later. And she would find out because nothing ever stayed a secret very long in Burnt Boot.