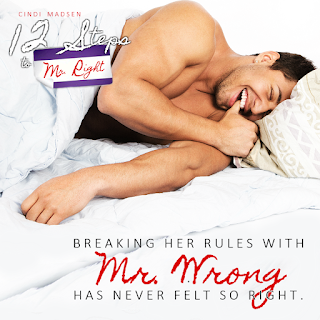 Why is it, that whenever you run into someone you’d really like to impress, like your ex or the person you consider as the one that got away, it’s never when you’re all dressed up and feeling your best? It’s like the more you want to impress them, the longer it’s been since you caught a shower. LOL.

Savannah was in love with Lincoln Wells in college. They started out as friends, and during spring break, they ended up in bed together. But what she hoped would turn into something more ended up being a one-night stand. So of course when she runs into him again, it’s while wearing yoga pants, hair in a crumpled bun, and the only reason she left her house in the first place was because she was having caffeine withdrawals. Just as she’s about to put the coffee into her system, she gets a different kind of jolt, the kind you get when you run into someone from your past and don’t know how to handle it.

“Savannah? Savannah Gamble?” a different, deeper voice said from behind me. Scooping up my coffee, I spun around.

And squeezed my cup so hard the lid popped off. Scalding liquid sloshed over my hand and onto the floor, barely missing my shoes. Hot, hot, hot.

Link grabbed napkins and started patting my fingers, at which point I became fairly certain he wasn’t, in fact, a mirage or figment of my imagination. I set my coffee cup and bag aside so I could help clean myself up.

Only I got caught up staring into familiar blue eyes instead. Hot.

That was the problem with Lincoln Wells. Between the light brown hair he usually kept on the buzzed to short side and those striking blue eyes, he was the kind of hot that’d scrambled my brain for an entire year in college.

“Sorry,” he said, wadding the napkins into a ball and making a perfect toss into the nearby trashcan. “Didn’t mean to startle you.”

One corner of his mouth curved up—oh the hours I’d spent daydreaming about that sexy crooked smile—and then he pulled me in for a hug. “I can’t believe it’s really you.”

On autopilot—or maybe force of habit—I hugged him back. Like in college, he was all lean muscle, although he’d filled out a bit, broader in the shoulders and chest than he used to be. My heart skipped a few beats, and I told myself to stop the rising tendrils of attraction right in their tracks. No thinking about how solid or warm he was, or how long it’d been since I’d been this close to a guy in general, much less a good-looking one.

Millions of women are looking for The One. A soul mate. Future spouse and father of their children. The problem is, a large portion of those women have the uncanny ability to walk into a room, find the most unattainable guy, and fall in love with him in ten seconds flat. These are the same women constantly in need of consoling because yet another boyfriend—the same guy everyone repeatedly told her was trouble/wrong for her/a player—broke her heart.

I’ve been there. My girlfriends have been there. I’ve even patted perfect strangers on the back in a bar as they cried over their failed relationships. So what do you do when you’ve had one bad relationship after another, your faith in love is faltering, and you want to give up, but the promise of Mr. Right being out there—possibly just around the corner—still calls to you? Tells you not to give up or you might miss him and some other woman will snag him?

That’s where I, Savannah Gamble, dating coach extraordinaire, come in.

I’m here to tell you there’s hope. Mr. Right is out there; it’s just a matter of learning how to find him. Tricky? Yes. Impossible? No. The key is being trained to change the way you look at prospective candidates so you can find the one who’ll give his all to land the position of your significant other.

Twelve steps to get rid of old dating habits, work through past heartbreaks, figure out how to distinguish the Prince Charmings from the frogs, and find yourself in a relationship that’s actually going somewhere. 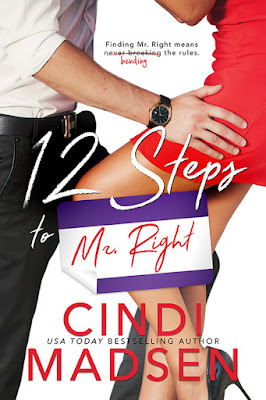 1: Admit to being powerless over your attraction to the wrong type of guy. (Like Lincoln Wells, who broke your heart after an unforgettable one-night stand.)

2: Believe Mr. Right is out there.

4: Make a list of qualities you want in a man. (Avoid charming baseball players/reason you made these rules in the first place)

5: Take charge of your own life.

6: Learn to love yourself.

7: Sort the hookup guys from the relationship guys. (Avoid a painful brush-off after an amazing night together.)

8: Never, ever settle. (Even if the chemistry is off-the-charts.)

About the Author:
Cindi Madsen is a USA Today Bestselling author of contemporary romance and young adult novels. She sits at her computer every chance she gets, plotting revising, and falling in love with her characters. Sometimes it makes her a crazy person. Without it, she’d be even crazier. She has way too many shoes, but can always find a reason to buy a new pretty pair, especially if they’re sparkly, colorful, or super tall. She loves music, dancing, and wishes summer lasted all year long. She lives in Colorado (where summer is most definitely NOT all year long) with her husband and three children.
Posted by Maureen A. Miller at 12:30 AM