Rooting for the Tomboy

I’ve always delighted in reading books and watching movies that starred a spunky, young woman that wasn’t quite like the other girls—who’d rather climb trees or shoot hoops like Monica from Love & Basketball. Or would rather tinker on a car or slam their sticks on a drum like Watts from Some Kind of Wonderful. And, oh, I could so relate when they fell in love but didn’t quite know how to show it—to get the guy to see that they were so much more than the “tomboy” label. They were unique and interesting and lovely. 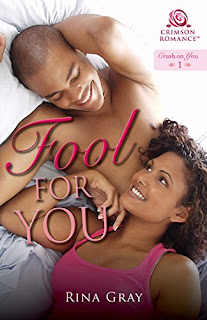 These famous on-screen heroines influenced the sports loving journalist, Melanie Foster in Fool for You. Melanie has loved her best friend Damien since she was twelve-years-old. All grown up, she is ready to take charge and finally confess her feelings. But you know how life is…it doesn’t quite line up the way that you’d like. Damien, in fact, plans to ask his girlfriend to marry him. Eeek!

“Okay.” Taking a deep breath, he lifted his eyes to meet hers. “Completely random hypothetical question.”

“Sure, Damien,” she replied in a “yeah right!” voice. His questions were never random or hypothetical.

“Have you ever had to sacrifice your happiness for a greater good?”

Touching her chin, she tilted her head to the ceiling. “I can’t say that I’ve had the opportunity.”

He leaned forward and whispered, “Would you?”

Her eyes snapped back to his.

His voice was controlled. Calm. But the intensity that sparked from those brown eyes seemed anything but calm. Pressure weighed on her chest. She had a feeling the wrong answer could have dire consequences.

“I guess … I would. Like in Armageddon. When Bruce Willis’s character sacrificed his life so that his daughter’s fiancé didn’t have to detonate the bomb.”

Damien nodded. His body didn’t relax. If anything, it became rigid.

A feeling of dread rushed through her veins. She’d given the wrong answer. “Tell me what’s wrong.”

He dug into his pocket, took a ring from a small box, and pressed it into her hand. She immediately clasped it, too afraid to look. The ring cut into her palm, a taunting and painful warning of the hurt that waited ahead.

Reluctantly, she opened her fingers, revealing the most audacious, too-shiny, too-bright, gaudy ring.

I’m going to ask Vanessa to marry me.”

“You’re marrying V-Vanessa?” Melanie’s eyes darted between Damien and the offending object in her hand.

Despite the coolness from the ring, a pool of liquid heated at the base of her stomach. Pressure built. Not slow, but fast. Supersonic fast. The pressure rushed up and seeped through long, jagged cracks that had formed across her chest.

She tossed the ring onto the table like dice. Rolling and spinning, the silver band toppled in front of Damien.

“I didn’t know that …” She cleared the large achy clump that blocked her throat. “I didn’t know that you and Vanessa were serious. Or engaged, for that matter. Oh, wait, that’s not right. You couldn’t be engaged because you haven’t asked her yet. But I didn’t know … didn’t realize you were serious about her.” She was babbling but couldn’t stop herself. Either ramble like a lunatic or cry like one. 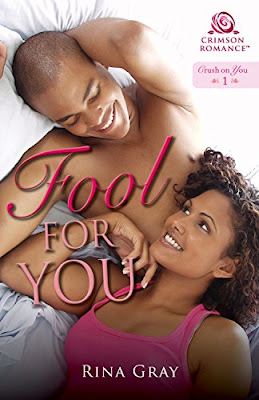 Sports journalist Melanie Foster has achieved most of her goals: Bomb.com job - check. Tomboy-to-smoking-hottie makeover - check. Convince her best friend, Damien Richards, to slide a ring on her finger and father her two-point-five kids - not so much. When she activates Operation: I'm Gonna Make You Love Me, she never imagines her BFF already has plans to stroll down the wedding aisle with another woman.

Damien's in the middle of crisis mode. The non-profit for young athletes at which he volunteers is in financial trouble. He'll pull out all the stops to rescue the organization that saved his life after his career-ending injury - even if it means sacrificing his personal happiness.

But when he finally wakes up to love and the very non-brotherly feelings he's long held for Mel, it just might be too late. Damien must convince her that he's worth the risk and turn the tables to show her he's the one ready to be a fool for love.

Bio:
Rina Gray is one of the newest African American romance writers on the rise. She is also a digital marketing professional who discovered her love of writing in 2012. Writing has always been Rina’s passion, though initially, she tried to deny it. In college she served as the copy editor for the entertainment magazine and newspaper. During her tenure, she had the opportunity to interview various talented entertainers including Chris Rock and the cast from Reno-911.

Rina has always been an avid reader, sneaking to read her mother’s books she had no business reading i.e. Stephen King’s The Stand, It, and Anne Rice’s various vampire series. As a pre-teen, she received a load of romance novels from a family friend and from that point on, she devoured any book related to romance or horror. When she’s not writing, she can be found with her head stuck in a book, kickboxing, or dominating game night with friends and family. Rina resides in Atlanta with her husband.
​
Follow Rina: Website | Facebook | Twitter | Goodreads | Newsletter