With: D. B. Michaels 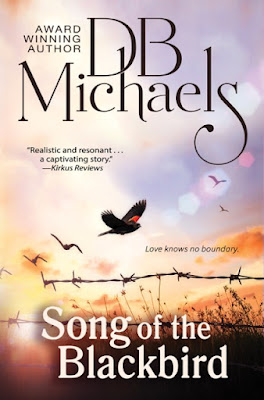 SONG OF THE BLACKBIRD

Healing must start from within…

Desperate to reconnect with her half-brother, Emma Edwards takes her new medical training and secures a doctor’s job at the prison where he’s serving a sentence. But what she finds there is worse than she ever imagined…tough rules and even tougher men, gangs powered by drug money and corruption. Emma must find a way to keep her brother alive until he’s freed even if that means lying to the one man she should be able to trust…

Warden Maxim Chambers doesn’t believe a woman should be working in a penitentiary, especially one like Emma – a woman even a hardened man like him can’t get off his mind. He’s spent too many years building walls around his heart to let himself care about anyone. But when Emma is almost hurt in a prison assault, Maxim can’t deny his feelings for her. But what is the connection between Emma and the prisoner named Sam?

And accept your past.

When secrets are revealed, danger and death run through the prison. Only the truth can save Emma and Maxim…if it’s not too late.
Song of the Blackbird immerses you in a whole new world – a gritty, violent world where things you have always believed turn out not to be true. It is a compelling story of sorrow and loss, of hope and second chances, and most of all, of the power of love.

“Elderly inmate beat up by one of the staff here,” Emma said. “Vitals stable, getting fluids. Probably shot some heroin too.”

“Custody beat him up?”

“The guards. That’s what they’re called here. You know, the men and women in green.”
“Oh. I’m not sure if Chambers is Custody, but the man is way out of control.”

A delicate cough came from the nurses’ corner. Dr. Brown’s face changed into a peculiar shade of red as he stared at the open entranceway.

No, it couldn’t be. Emma groaned to herself. She turned around and sure enough, the big brute from earlier stood glowering at her from the doorway. Two men in green Custody uniforms flanked his side.

“I assume you two have met,” Dr. Brown said in a strangled voice.

“Dr. Edwards, nice to see you again.” A pair of familiar silver eyes flared at her. “If you have a complaint about me, call the governor.”

“Of California?” Emma asked, her spirits dwindling as fast as air from a popped balloon.
“Of course. What other state would we be talking about?” The man extended his hand. “Maxim Chambers. Your warden.”

Emma closed her eyes and prayed it was all a dream. But alas, the gods were not on her side. Of all the luck. He had to be the warden. No wonder the guards kowtowed to him. Suddenly she found her tiny hand swallowed up in a warm paw. “Emma Edwards, nice to meet you,” she squeaked out.

Chambers shot her a nasty look before dropping her hand like a hot potato.
Author Bio:
DB Michaels is a life-long reader who fell in love with the field of medicine during college. Double boarded in internal medicine and emergency medicine, she enjoys using her skills to help those in need. Working as a doctor in the prison system inspired her to write Song of the Blackbird, the first installment in her Albatross Prison Series. Though the book is fictional, it illustrates the power of love, hope, and second chances.


DB’s first passion has always been books and she is happiest when she is absorbed in a great novel or writing. When she has time off, she likes to watch old movies, dally in the sun, and spend time with her family.