A couple of fun facts about me.

Do you have any fun facts you’d like to share? Anyone who comments goes into the running for a signed hardcover copy of Winning the Boss’s Heart or an e-copy.

I’ll break the ice. A couple of fun facts about me?

I can shake my eyes on command – talent right there!

When I was seven I was awarded ‘Most Improved’ at ballet. I still have the cup. I was terrible at ballet.

I have never parallel parked a car.

Here’s some fun facts about Sophie Callaghan, the heroine in Bound to the Bounty Hunter.

Sophie is a Young and the Restless addict, but don’t ask her if she’s team Newman or Abbot. She won’t tell.

She collects snow globes – all ninety-four and counting. Her favorite is Dorothy with her trademark ruby slippers S. You are my night and day. 7 May engraved on the bottom.

Growing up she had thought body contact between a man and a woman was for reproduction only. Anything else was the equivalent of eating kittens’ souls and chanting in tongues.

Works as a private investigator and a second job as a waitress in a biker bar.

Eats two minute noodles so she can cook for her elderly neighbors every Thursday.

Has a dog with a gas problem. Let’s just say Pongo can clear a room in ten seconds flat.

She didn’t realize her preacher father was a con artist. She’s now on a mission to pay everyone he conned back.

She can tie a cherry stem in a knot with her tongue.

She’s determined to stay out of Harlan Franco’s way after he faked his attraction to her all for the sake of napping a bail jumper they were both after. 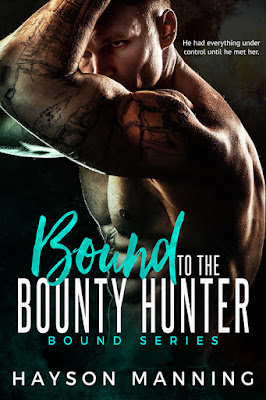 BOUND TO THE BOUNTY HUNTER

Harlan Franco, Colorado's busiest bounty hunter and security expert, lives by his own rules: be in control, be detached, and never mix business with pleasure. These rules are tested when the woman he's being paid to secretly guard is none other than the sexy, unpredictable, pain in the butt, Sophie Callaghan––a woman determined to stay away from him. If Sophie finds out he’s in her life on an assignment, he'll never get the info he needs. But those lips, those curves, that attitude… If he could only have her for one night where she'd play by his rules.

Freedom-loving private investigator Sophie Callaghan is on a mission. The daughter of a con-artist is not going to be used by a man again. What she doesn't need is hot, broody, and controlling Harlan barging into her life. Her brain may say no, but her body craves this bad boy.

After a night where both live out their darkest desires, Sophie tries to fight the explosive chemistry between them. But the ties that bind her heart to this bounty hunter are tight and tangled.

Here’s a little peek of Bound to the Bounty Hunter.

“What exactly are you doing here?” Harlan asked. “Doesn’t seem your scene,” he said, leading her again across the creaking wooden floor.

Sophie moved left and tried to pull him in the same direction.

“Dancing to ‘Happenin’ Hits Back in the Day has been on my bucket list for a while,” she said through gritted teeth when he wouldn’t budge. “Next week is knitting coats for cats.”
She went to move left but he went to move right.

“You have to let me lead,” he said, his breath tickling her ear.

She stood on her toes, her lips brushing his earlobe and thought for a moment she’d heard him growl. “No, I don’t.”

His hands tightened on her waist, and with gentle force he moved her in the direction he wanted her to go.

“What are you doing?” she demanded.

One hand splayed across the bottom of her spine, his arm wrapped around her shoulders, pulling her in tight.

Hip to hip, chest to chest, his unique scent of soap, sweat, and man filling her.

Everyone else melted away.

His pulse steady and slow against her fingertips. His head resting lightly on the top of hers. They moved in time to the slow beat.

“Letting me take control wasn’t too bad.” A smile teased his lips.

The mood broken like a boulder landing in a still pond, she stiffened and pulled back.

His eyes flashed. “Oh, hell no. You all soft against me? I’m not giving that up.” He pulled her against him and touched his lips to her neck.

She fought the heat that traveled down the column of her neck then exploded throughout her body.

The music turned into a sultry tango.

A sexy tango when you weren’t sexy, with a man who radiated sex appeal and whose tank was topped up?

She tried to fight her way out of his hold, but he tightened his grip.

“Let me go,” she whispered.

About Hayson Manning:
I love Princess Bride, Young and the Restless, Days of our Lives—the drama is deliciously addictive. Big Bang Theory but will take Wolowitz over Cooper. Star Trek not Star Wars. Undercover Boss, Secret Millionaire—any story that shows the little guy making it. I follow the Buffalo Bills like a religion. I am spellbound by showjumping and equestrian eventing.  I love curling up and reading all books—no genre is off-topic. I like ironing, hate peas, love donkeys. I play a killer game of Scrabble, but usually lose. I will often be heading towards the fridge for another Diet Coke. I eat nothing with legs and believe wine goes with everything, oh and I’m an expert at finding new and inventive ways to avoid exercise.

I live in the sparkly beachside suburb of Redondo Beach in California with my fake Gordon Ramsay and two boys who speak in mystifying grunts.