THE ART OF RESEARCHING A BOOK

Congratulations to "Anita H." and "Tammy Y.", the winners in Tracy's giveaway. Thank you to all who participated!

They say to write what you know, but with most of my books, I’ve had to do a fair amount of research. Despite setting the stories in places I’ve lived or visited frequently, there is still that critical moment where I need to surf the Web for a picture or a street name or even a description. I’ve written books that involved more extensive investigation of diseases or legal precedent. But mostly, I try to stick to writing about things I’m familiar with.

So when the editors at Tule Publishing asked me to write for their series on smokejumpers who fight wildfires in the Montana wilderness, I was a little intimidated.  Because, really, there was no way I was jumping out a perfectly good airplane in the name of research. Fortunately, social media and the Internet came to my rescue.

I have to give credit where credit is due:  there was a lot of groupthink that went into SMOLDER. Once I put it out on social media that I was writing a book featuring a smokejumper, I was immediately “friended” by several men and women who risk their lives in these jobs every summer. The stories they told helped me to “see” what it was like to walk in their shoes. Their guidance in the terminology, the procedures, and the equipment was invaluable. My readers jumped in to help name places and characters and many of the animals featured in the book, too. (If you want to help me name pets/places/characters in future books, be sure and hang out on my Facebook page at Tracy Solheim Books.)

Since Montana is one of the four states I’ve never been to, I spent a lot of time perusing beautiful pictures my photographer friends have taken and picking the brains of other friends who’ve visited the Glacier National Park area. It all looked so beautiful, that I actually planned a family vacation to the area in 2017! My husband refers to this as one of the hidden expenses of being married to an author.

My heroine was a bit easier to write. Just in case you don’t follow along on Facebook, I must admit to having a bit of a thing for horses. I bought my daughter one when I sold my first book and we’ve spent the past three years traveling to and from horse shows around the southeast. Granted, my extensive experiences with the horse consist of wiping off tack, feeding her peppermints and carrots and holding the reins when my Diva demands—I mean asks! But I’d wanted to base a book at a barn or ranch for years and with SMOLDER, I finally got the opportunity.

In fact, I knew who my heroine, Laurel, would be based on almost immediately. An image from a 2013 Chevy Silverado commercial had been playing in my head, demanding that I write her story. You can see the ad here. Even more intriguing, the woman portrayed in the commercial is not an actress, but an actual horse trainer! It was more a case of art imitating life and I just rolled with it.

SMOLDER is the first in a series of novellas penned by five different authors. The second book in the series is called SCORCH and it was written by Dani Collin. Dani lives in Canada where wildfires have been raging this spring. She is donating a percentage of her book’s pre-sale profits to the Red Cross to help the victims of the fires. Nicole Helm wrote the third installment, IGNITE, and Karen Foley created HEAT. Australian author Victoria Purman wrote the final installment, FLAME.

Readers will get to revisit familiar places and characters just as if the books were written by a single author. Best of all, they will be released one per week beginning this week with SMOLDER. Look for each book in the series to release on Tuesdays through the first week in July.  They’re all novellas, so they’re perfect for an afternoon by the pool, lake or beach. 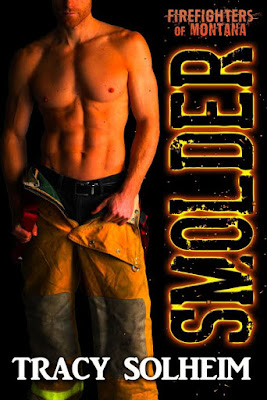 Former Army Ranger, Sam Gaskill, is starting over in Glacier Creek, Montana - far away from the plains of Texas and the memories of his late wife. Taking charge as the new captain of a squad of smoke jumpers should provide him with enough adrenaline to chase away the ghosts from his past. Until a sexy, green-eyed temptress with a sassy mouth enters the picture.

Laurel Keenan, champion horsewoman, couldn’t wait to escape her hometown. But instead, an ailing mother and an unplanned pregnancy landed the impetuous dreamer right back on her father’s ranch. Laurel has managed to lead a quiet life with her young son—until she sets eyes on the tough guy with the sexy ass.

Sam already failed one woman; he won’t trust his heart with another. And Laurel is determined not to risk her heart—or her son’s—on another thrill-seeker. Can their slow burn lead to a love that lasts?

EXCERPT:
Her eyes drifted over her shoulder to Russ’ solitary parachute. Sam was about to do what Russ had done—leap out of an airplane with nothing but the hope his jump cord wouldn’t malfunction. Or that an errant wind wouldn’t catch him and toss his defenseless body into the jagged limb of a tree.

A shiver of apprehension rocked through Laurel as she forced her gaze back into the office where it collided with Sam’s own hard stare. He’d finished with his backpack. Now he waited silently with his hip propped against his desk and his arms crossed over his chest. This time Laurel’s shiver was brought on by the hungry look in his eyes.

A terse nod and a quirk of an eyebrow were all she got in response.

“Umm, Miranda says you’re going out on a jump?”

He nodded again. His arrogant silence was really beginning to get on Laurel’s nerves.
“Well, were you even going to let someone know?” she demanded.

There was a painful pause before he finally spoke. “Someone being who exactly?”

Laurel huffed in annoyance. “Someone being Tabitha, perhaps?”

A corner of his mouth turned up at the idiocy of her words, and that made Laurel even more annoyed.

“What’s she going to think when you don’t show up tonight, hmm?”

A slow grin spread across his face, revealing a mesmerizing dimple on the right side of his mouth. The potency of his unexpected smile had Laurel reaching for the doorframe to keep her balance.

“I mean, you should let one of us know when you leave so if something should happen to Tabitha. . .well, we’d. . .” Her voice trailed off when he gently wrapped his fingers around her wrist and tugged her further into the office. Before she could react, the door was closed and her back was pressed against it while his mouth laid claim to hers.

He kissed her slowly this time, as though he was taking her as a prize for some victory. Laurel wanted to be offended, but the feel of his tongue sliding suggestively against hers had rendered any arguments mute. Her fingers had somehow found their way into his short, wavy hair, surprisingly soft between her fingertips. His hands slid underneath her cotton sweater where he let his palms skim over her skin, leaving a trail of arousing heat in their wake.

“Say what you really came here to say, Laurel,” he murmured against her lips. “Admit that you wanted me to come upstairs and finish what we started the other night.”

“Did not!” Laurel’s protest might have sounded more convincing had her hands not been exploring Sam’s ass.

He grinned again. This time it had a bit of a ruthless edge to it, making Laurel’s insides somersault. Her body quickly made a liar out of her when Sam took possession of her lips one more time. She was sure he could feel the wild jolt within her as his mouth crushed hers. Her hips rolled restlessly at his, and she all but conceded defeat.

“It doesn’t matter what I want.” She practically wailed when his lips cruised to the spot near her ear that always made her knees buckle. “We can’t do this.”

“Mmm,” he murmured against her skin. “I have to go on a jump in forty minutes. The rest is going to have to wait until I get back.”

Laurel tapped her head against the back of the door in the hope of knocking some sense into her woozy brain. “No. That’s why we can’t do this. Now or ever.”

His face was hard again as he pulled away and Laurel’s body screamed at her in protest. She pressed her palms to the cool wood of the door to keep from digging her fingers into his T-shirt and pulling his body back against hers.

“That’s what I came to tell you,” she whispered.

“Do you ever say what you really mean?”

She hated that he had a point. “I have a little problem with impulsive behavior. But I’m working on it.”

“And what, I’m too impulsive for you?” he drawled, angrily. “Or not impulsive enough?”

Laurel pointed to the jump pack sitting ominously in the corner of the room. “Too risky. Your job is too risky, which makes you too risky.”

There was a brief flash of anguish in his eyes before he shuttered them behind the hard mask he’d likely perfected in the army. Laurel felt a spasm of guilt for having brought him any pain. But she had two hearts to protect—hers and Tyson’s.

“Yeah,” he said stoically. “It seems I’m destined to attract women who feel that way.” He reached behind her and pulled open the door. “We should be back on Friday sometime. Tell Tabitha not to worry.”

BIO:
After years of writing reports and testimony for Congress, Tracy Solheim decided to put her fiction writing talents to better use.  Since her debut novel in 2013, her books have been bestsellers both here in the U.S. and abroad. Tracy is also a regular contributed to USA Today’s Happy Ever After Blog where she writes about—what else—sports and romance. She lives in the heart of SEC country, also known as the suburbs of Atlanta, with her husband, their two works-in-progress, a Labrador retriever who thinks she's a cat and horse named after her first novel.   When she’s not at the barn with her daughter or working out with friends (i.e. lifting heavy bottles of wine), she’s writing.  Except for when she’s reading, but according to her, that’s just necessary research.  See what’s she up to at www.tracysolheim.com .

GIVEAWAY:
I’m giving away two digital copies of SMOLDER. Just tell me one thing on your bucket list. It could be a place you want to visit (like Montana for me!) or something you want to do. I won’t have jumping out of airplanes on my list, but maybe you’re braver than I am!

Giveaway ends 11:59pm EST June 10th. Please supply your email in the post. You may use spaces or full text for security. (ex. jsmith at gmail dot com) If you do not wish to supply your email, or have trouble posting, please email maureen@JustContemporaryRomance.com with a subject title of JCR GIVEAWAY to be entered in the current giveaway.