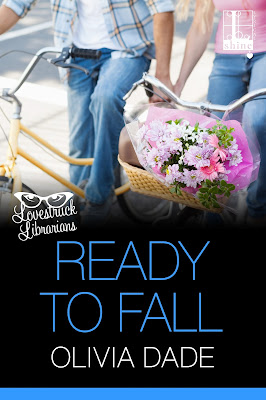 Elementary school teacher and part-time librarian Sarah Mayhew has the perfect plan: show off her cycling skills at her school's bike retreat and attract her oblivious coworker in the process. Her end game? Fall in love. Only one problem: she needs to find someone to teach her how to ride a bike pronto. But when she catches sight of Chris Dean's gorgeous physique, her best laid plans are about to go off track . . .

Chris is not looking for a girlfriend. He's getting over his last one by focusing on his bike repair business. So when a feisty, sexy schoolteacher urges him to help improve her cycling skills, he does it strictly for the money. He vows he won't repeat history, even for a blond bombshell like Sarah. But when the two find themselves alone on the road, they can't help taking a detour straight into each other's arms . . .

Ready to Fall Excerpt
“Why did Helen send you here?” Chris asked.

Sarah fished a folded printout from her huge purse and slapped it on the counter. “Take a look.”

He unfolded the paper and scanned the text. Apparently, the faculty and staff of Spring Ridge Elementary School had been invited to participate in a bike retreat as part of a new fitness initiative. That still didn’t explain what she wanted from him, however.

“It’s hot enough out there to cook us like rotisserie chickens.” Sarah tapped a finger on the flyer. “I’ll be surprised if more than a dozen teachers survive the day. But at least our meat will be juicy and flavorful.”

Stifling another grin, he started making his way to the store entrance. Time to end this conversation and usher her out. “If you need a volunteer to give the bikes a tune-up or someone to sponsor the event, keep looking. I can’t. Like I said, this is a pretty new shop. I have too many things to do and not a lot of extra money.”

Instead of following him to the door, she turned around and leaned her curvy butt against the counter. “That’s not why I’m here. I need you to teach me how to ride a bike before that retreat.”

And there it was. The reason for all this. “You want to learn how to ride in three days?” 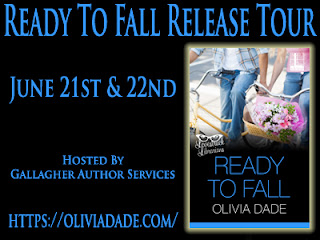 “And you want me to teach you? Over the Fourth of July holiday? On top of my normal schedule here at the shop?”

Her smile began to fade. “Yes.”

Jesus, this had to be a joke. In what universe would Helen ever believe he’d give a grown woman riding lessons after work? Him, the man she often called the pissiest human being on the face of the Earth? Unless . . .

“Is Helen trying to set us up?” Unable to resist, he scanned Sarah’s lush body one last time. “You can tell her she got my type right. But I’m not ready to date again. Sorry.”

Sarah remained silent for a long moment, taking what appeared to be a confused look down at herself. Then she raised her head and stared directly at him.

“This isn’t a setup. This is—I mean, I am—a woman who needs to learn how to ride a bike in three days for the sake of true love.” As his mouth opened, she clarified, “Don’t worry. True love for another man. Not you.”

Bio:
While I was growing up, my mother kept a stack of books hidden in her closet. She told me I couldn't read them. So, naturally, whenever she left me alone for any length of time, I took them out and flipped through them. Those books raised quite a few questions in my prepubescent brain. Namely: 1) Why were there so many pirates? 2) Where did all the throbbing come from? 3) What was a "manhood"? 4) And why did the hero and heroine seem overcome by images of waves and fireworks every few pages, especially after an episode of mysterious throbbing in the hero's manhood?

Thirty or so years later, I have a few answers. 1) Because my mom apparently fancied pirates at that time. Now she hoards romances involving cowboys and babies. If a book cover features a shirtless man in a Stetson cradling an infant, her ovaries basically explode and her credit card emerges. I have a similar reaction to romances involving spinsters, governesses, and librarians. 2) His manhood. Also, her womanhood. 3) It's his "hard length," sometimes compared in terms of rigidity to iron. I prefer to use other names for it in my own writing. However, I am not picky when it comes to descriptions of iron-hard lengths. At least in romances. 4) Because explaining how an orgasm feels can prove difficult. Or maybe the couples all had sex on New Year's Eve at Cancun.

During those thirty years, I accomplished a few things. I graduated from Wake Forest University and earned my M.A. in American History from the University of Wisconsin-Madison. I worked at a variety of jobs that required me to bury my bawdiness and potty mouth under a demure exterior: costumed interpreter at Colonial Williamsburg, high school teacher, and librarian. But I always, always read romances. Funny, filthy, sweet--it didn't matter. I loved them all.

Now I'm writing my own romances with the encouragement of my husband and daughter. I found a kick-ass agent: Jessica Alvarez from Bookends, LLC. I have my own stack of books in my closet that I'd rather my daughter not read, at least not for a few years. I can swear whenever I want, except around said daughter. And I get to spend all day writing about love and iron-hard lengths.

So thank you, Mom, for perving so hard on pirates during my childhood. I owe you.