Unlike most Paleo-eaters, I believe that junk food has a place in life. Maybe it’s because I’m also a writer, and I dare say most writers have snacky-thingies handy that help the creative juices flow. Hey, whatever it takes to get the book done, right?!

For me, it’s all about the chocolate. Specifically, Peanut M&Ms. It isn’t necessary to indulge all the time – although, c’mon, I’m only human! – but there’d better be a dish of them at least in sight or La Muse will dig her heels in and stubbornly refuse to participate in that day’s writing session. Witch.

The quirky thing about it is, while there must be Peanut M&Ms around, I can pretty much take it or leave it…well, most times anyway. Which is so unlike the heroine in my new romantic comedy, Driven to Temptation.

Delaney Harper has a serious attachment to junk food. Corn chips, potato chips, cookies, she loves them all! Her absolute fave is double chocolate chip cookies. Funny thing about that, though, is that she eats those last, claiming that she can then savor each bite. Not sure where that came from, but who am I to question what La Muse spills onto the page?

Now what about you? Are you a junk food eater? What’s your favorite kind? 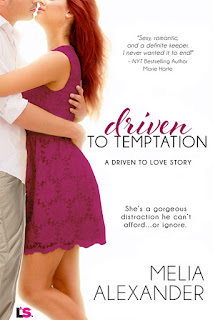 Aidan Ross might be an engineering genius, but people skills? Not this soldier’s forte. Thankfully, a trusted friend is accompanying him to a make-or-break tradeshow…but then a bubbly redhead hops into his truck, claiming to be his new road trip buddy. She’s a gorgeous distraction he can’t afford. Or ignore.
Delaney Harper comes from a family of engineers—male engineers. With several impressive projects under her belt, she’s on a mission to prove she can hang with the big boys, too. But cracking the sexy, closed-off CEO is tougher than she expects…and hotter than she could have imagined.
With the tempting woman disrupting his carefully planned schedule, Aidan can’t focus on the road, much less their upcoming presentation. The future of his company is riding on this trip, and if they’re to land a huge account, he has to keep his head—and his heart—in the game…
Amazon | B & N

About Melia Alexander:
Melia Alexander is the author of sassy, sexy, fun contemporary romances, but is also fortunate to spend her week days at The Male Observation Lab (a.k.a. her job at a construction company) where she gets to observe guys in their natural habitat. Though they often behave like typical alpha males, in many instances she's seen through their personas to the heart of who they really are - the heroes of their own stories. A native of Guam, Melia traded in warm, tropical breezes for the rainy Pacific Northwest. She's an avid reader who also loves romantic comedies - preferably with a glass of CabSauv and a box of chocolates nearby. In her free time, she's busy conquering her CrossFit fears: ring dips, muscle snatches, and the dreaded 800 meter run. Her family appreciates her attempts at cooking and cleaning, although she spends it mostly daydreaming about her characters, which sometimes results in a burnt meal and a half-cleaned house.