We asked the authors of the hot summer box set, Heartbreakers and Heroes, about when they last broke a rule themselves and their responses were fantastic! Check it out…

Jennie Marts, USA Today Bestselling Author
In trying to come up with the last time I broke a rule, at first I couldn’t think of one, then I thought of so many that I didn’t know which one to pick. It’s funny when you start thinking about rules and how many we actually break a day, a month, a year. And it seems that I am quite a common rulebreaker.

I’m always running five minutes late, and just in the last week I sped through a yellow light that may have possibly turned red, I served a box of pasta that had expired, I forgot to use my blinker, did use an adverb, and ‘donated’ some money to the library for that late library book I forgot to turn in. I may have even ripped the tag off of my new mattress…shhh!!
The rule I tend to break on a daily basis though is swearing. Although I am the queen of euphemistic swearing. Some of my favorites substitutes are dirt, shite, shizzle, fudge, and shi—shoot. Not that I haven’t been known to drop a strategically placed F-bomb, but it’s more common for me to use a frustrated g-rated version.

Oh F—ridgerator! Looks like this article might be late. Gotta go. Have a freaking fantastic day and go break a few rules!

Veronica Forand
This is more about my daughter breaking a rule. She attends a private school with a strict dress code. When she wanted to dye streaks of blue and purple into her hair, I thought I was being brilliant when I told her that she can unless the school tells her to change the color back to normal. They have been good about keeping girls’ hair natural colors. Three weeks after my daughter went to school with colorful streaks, the school still hadn’t made her change the color. She’s changed her hair color three times since then. So much for life lessons.

Codi Gary
When I was sixteen, and had only had my license for about two months, I told my mom I was going to the movies with my boyfriend. She didn’t want me driving all over, and especially not with a bunch of kids in the car, so I didn’t tell her I was picking up my friend and her boyfriend thirty minutes away…until I rear ended another car and had to explain to my mom where I was and why. Since then, I believe in Karma and try not to tempt the fates.

T.J. Kline
I am definitely not a rule-breaker by nature. I like order and lists. It’s makes me feel in control of my circumstances. However, there were times growing up that I was intent on breaking rules. Like the time I’d been grounded from seeing my boyfriend in high school. In retrospect, my parents were doing their best and he was not a good influence, but at sixteen and “in love,” I was ready to spread my wings and be the independent woman I believed I was.

So when he looked up at me with pleading turquoise-blue eyes, begging me to cut school and come back to his house to spend the day with him, reminding me how much he missed me and that he couldn’t call me (since I was grounded from the phone…this was pre-cell phones and texting!), I practically leapt into his beat-up car. It was a lovely afternoon, in spite of the other friends that showed, filled with laughter and some make-out sessions.
Until there was a knock at the door. And someone called out, “Hey, your dad’s here.”

Apparently, my younger siblings, riding the bus home from school, had seen us outside and proceeded to tattle which prompted my father to show up to bring me home, amidst the mocking laughter of my “friends” while my wonderful boyfriend left me to take the heat. While I did confess what I’d done to my parents, their punishment (more grounding) was nothing compared to the humiliation of facing my friends the next day. That said, I no longer felt the need to cut school to spend time with a guy who wasn’t even brave enough to face my father with me.

Sharla Lovelace
I’m kind of a rule follower now…that parenting thing flipped me around…but once upon a time I knew every possible avenue to bend the rules. Can’t go to that place underage? Have a (way beyond) crafty friend make a fake ID. Not allowed to meet up with guys? Spend the night with a friend who is. Have a suspicious mom (rightly so) who starts nosing around? Hide the beer stash in my old box of stuffed animals. One night, while helping friends run a firework stand, my friend and I each told our mothers we were spending the night with the other one, while we actually spent the night with ten other people in a trailer behind the stand. Dear God, when I think about that as a parent, I cringe!! LOL. It did make me super-spy-mom, though. My kids never understood how I knew things before they could even create the cover up lie. I told them: There’s nothing you can do that I haven’t done twice, and better. So think creatively, baby. 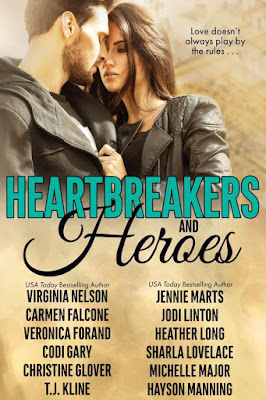 For his birthday one year, I gifted my husband, the budding Gordon Ramsay a cooking session at ‘He Cooks’ in Sydney where men get together and learn how to cook. I’m sure they complain about us to their hearts content. That particular Saturday they all learned how to cook an Italian three course meal, matched it with wine and dined together. Well, Gordo was off and running. Shelves were soon dedicated to cook books. He’d found his passion and my beans on toast didn’t cut it. Fine by me. We had a rule that if anything didn’t work I had to tell him. I was totally onboard. A couple of years ago he’d made me a beautiful individual birthday cake. It was so pretty with chocolate frosting and a candle. I couldn’t wait. (If you saw me you’d know I really can’t wait). One mouthful… He’d forgotten the sugar. I never said a word. I choked down that cake with a smile on my face and dreamt of the giant bottle of antacid in the bathroom.

A brotherhood of twelve men bound together by their troubled youth and one mentor who taught them the rules for becoming men of honor. But some of them haven't been following those rules...

Get your hands on TWELVE sexy HEARTBREAKERS AND HEROES- all new romances from USA Today bestsellers and your favorite contemporary authors that are sure to get your heart pounding.