That moment when everything changes 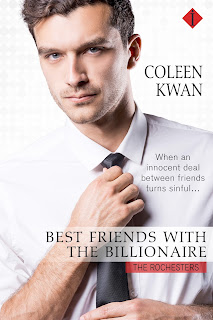 My latest release, Best Friends with the Billionaire, is a friends-to-lovers romance (as in case you didn’t get that from the title!) In it, Cassie Cooper and Kirk Rochester have been best friends since they shared a house during their college years. Cassie has been secretly in love with Kirk for years, but he has never seen her as other than his best friend. But that all changes when Cassie returns to San Francisco for a visit after several years away, and suddenly Kirk begins to see his best friend as a woman, and a really hot woman too. The realization hits him like a sledgehammer when he spots a stranger hitting on her in a bar.

***
Kirk finished his beer then visited the restroom. When he returned, a man was talking to Cassie. The stranger stood next to her bar stool, one arm propped up on the counter, leaning over her. He was well-groomed, probably in his thirties, and the way he was blocking Cassie off from the rest of the crowd indicated he was definitely interested in her.
Kirk stopped dead in his tracks. A strange, barbed feeling twisted in his gut as he stared at Cassie, trying to gauge her reaction to the dude. She sat straight, legs crossed, looking up at the guy hitting on her, and the small grin on her face said she wasn’t exactly discouraging him. Why the hell did she have to smile at him like that?

As he watched, Cassie straightened her Giants T-shirt, and the movement drew his attention to her breasts. He’d never studied her breasts before, but now he couldn’t help noticing they were round and firm and generous. He found himself noticing other things about her, like the soft fullness of her lower lip, the thick sweep of hair brushing her eyes, the curve of her upper thighs encased in denim.

The prickling in his gut intensified and rippled through his limbs. His fingers spasmed, and the muscles in his back contracted. Heat sparked and bloomed in him and spread to his groin in a hot, inexorable tide.

Shit, what was going on with him? He was staring at Cassie—leering at her—like a man who’d just gotten out of prison. Why hadn’t he ever noticed how sexy she was? Not glaringly sexy, not in a pouty, mincing, cleavage-thrusting way, but in a subtle, fresh, natural way, a way that snuck up and hit him on the head like a sledge hammer.

He rubbed the back of his neck, confused and dismayed by these novel sensations. How could he be turned on by Cassie now, after all these years? She was his best friend, she trusted him, relied on him. She’d never shown any amorous interest in him, not once in all the years they’d known each other. If she knew what was going through his head, if she knew he was sorely tempted to touch her, kiss her, run his hands all over her, she’d be horrified. Or frightened.

He couldn’t risk it. He’d already decided that he valued friendship over sex. Lust was transitory, and Cassie was too important to him to risk scaring her off. He had to forget how much he wanted to hold her.

The guy chatting her up let out a braying laugh, at the same time slipping an arm around her waist.

That does it! Kirk strode up to Cassie’s bar stool, jostling the man’s arm so it dropped to his side.

“Are you ready to go?” he asked Cassie, acting like the other man didn’t exist.

Kirk kept his focus on Cassie. She glanced between the two of them, bewildered. “Uh, sure.” As she stood, she looked at the other guy. “Sorry, we have to go.”

“But I don’t have your number.”

Kirk’s lips tightened. “It’s 1-800-in-your-dreams,” he snapped before he took Cassie by the arm and ushered her out the bar. 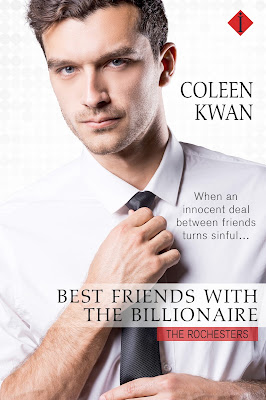 BEST FRIENDS WITH THE BILLIONAIRE

Cassie Cooper has never been the kind of girl noticed for her looks. But around billionaire Kirk Rochester, her best friend from college, Cassie wishes she could turn just one head—his. So when Kirk asks her to be his pretend girlfriend to thwart another woman's unwanted advances, Cassie embraces the opportunity to prove to him that she does have a feminine side.

Disillusioned by a rough marriage that had an even rougher end, Kirk values friendship more than romance. He’s always had a good thing going with Cassie. But he can’t ignore how sexy she is now playing the role of his girlfriend, and soon he’s fighting a dangerous attraction to her. Even though their time between the sheets is scorching hot, he refuses to take it beyond “friends with benefits.” He’s learned the hard way that loving someone is the first step to destroying his heart, and he won’t risk losing the best person in his life by falling in love with her.

Coleen Kwan has been a bookworm all her life. At school English was her favorite subject, but for some reason she decided on a career in IT. After many years of programming, she wondered what else there was in life — and discovered writing. She loves writing contemporary romance and steampunk romance.

Coleen lives in Sydney, Australia with her partner and two children. When she isn’t writing she enjoys avoiding housework, eating chocolate, and watching TV shows like Criminal Minds and Masterchef.