Sleeping With The Opposition

When I sat down to write this book, I knew it was going to be a tough one. You can’t write about hard times within a marriage and NOT relate to it somehow, whether you’ve been married for a year or twenty. Even if you aren’t married, you remember what it was like when your parents were going through a rough patch. You know how that kind of tension and pain feels, either first-hand or through family and friends.

Divorce and loss touches everyone, and as much as I love writing happy ever afters, I also wanted to write something really real. Not for shock value, or out of a twisted desire to torture the reader, but  because I think that our greatest hope comes out of fear, and our greatest love comes out of loss, and our happiest moments can come in the aftermath of pain.

Leo and Bria’s story is real. Maybe not my real, and maybe not your real. But maybe it is.

He should have gone to the club tonight. His temper was high, and his frustration levels even higher. Great idea, right up until the moment he sat down behind his desk and listened to the silence of the house closing in on him.

Car lights pulled into the driveway. He let out a long breath, and a moment later the house alarm beeped, happily celebrating another correct input of the security code.

At least she’s come home every night. So far.

Only because she was as stubborn as he was. And that was actually something in his favor. Maybe the only thing at this point. She would never abandon this house—an actual house in New York.

A glutton for punishment, he got out of his chair and went to the door of his study just in time to watch her heading right up the stairs like the devil was on her heels— or like she wanted to avoid Leo.

She was dressed in her best suit with the black stiletto heels that he’d once made her wear to bed—with nothing else. Her chestnut hair was twisted in that messy way on top of her head that looked half sexy librarian and half distracted pixie. A No. 2 pencil was still stuck in the middle of the knot. He used to find her No. 2 pencils all over the house because she took them out of her hair or from behind her ear and dropped them wherever she happened to be, then forgot all about them until she went to grab one from her hair again and realized it wasn’t there. But now he didn’t find them anymore. When she was here, she spent all her time in the bedroom, and he’d been banned from joining her there. He gritted his teeth, berating himself for allowing this estrangement to go on as long as it had.

“Celebrating the new job?” he asked. The words came off as irritated and provoking, but he couldn’t help it. That’s exactly how he felt. He wanted to irritate the hell out of her, to provoke a fucking response. He couldn’t handle another day of this freeze-out. She’d demanded “time,” and he’d given it to her without question, but the longer this went on, the more he was starting to believe that time was not what either of them needed. The longer this went on, the more he wanted his wife back. 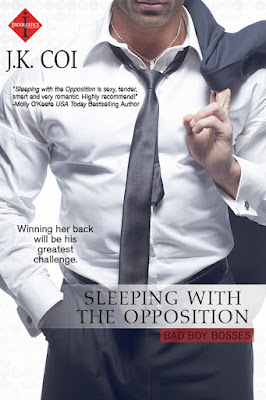 SLEEPING WITH THE OPPOSITION

Leo Markham has everything a man could want. Money. Power. Respect. But there's only one thing he needs—Bria. The trouble is, she's determined to move on, despite the breathtaking passion still between them. Sure, he's made mistakes, but he'll make her forgive him. He has to.

Shocked to find herself facing her devastatingly gorgeous ex as opposing counsel in the courtroom, Bria knows she can't let Leo hurt her again. He's the only man she'll ever love, but he wasn’t there when she needed him most. She's just going to have to learn to resist the pull of his lethal magnetism.
Leo is determined to win Bria back no matter what it takes. He isn’t about to lose the only woman who’s ever had his heart.

About J.K. Coi:
J.K. Coi is a multi-published, award winning author of contemporary and paranormal romance and urban fantasy. She makes her home in Ontario, Canada, with her husband and son and a feisty black cat who is the uncontested head of the household. While she spends her days immersed in the litigious world of insurance law, she is very happy to spend her nights writing dark and sexy characters who leap off the page and into readers’ hearts.
Media Links: