Hi All!  I’m Shae Ross and I write contemporary romance. I love strong heroines that challenge their sexy alpha’s with sass and smarts. My new release, RUSH, brings together the perfect pair! 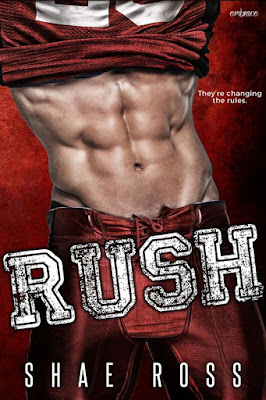 If soccer-all star, Priscilla Winslow, a/k/a “Peep”,  had known it was the hot-shot quarterback, Preston Rush wearing the Chewbacca costume, she might have thought twice about helping him. Instead she rushed into the chaos, earning herself a place beside him in jail.

His coach’s cover up his arrest, but when Preston learns Priscilla is suspended from the soccer team, he’s determined to get her back on the field, regardless of whether she wants his help or not.

Here’s an excerpt from their night in jail:
Preston:
I knock my knuckles on the eye-patch circles of dirt covering her knees and speak slowly. “I don’t know what you were thinking, walking into a biker bar dressed like a bad decision, but I’ve got some news for you.” Her brows shoot high as I lean in and continue. “Your Little Bo Peep costume has taken a hard detour off Mother Goose Lane and veered straight into Peep Show Alley.” I lower my chin, pinning her with an intense look. “There’s not a guy in this building who could look at you and not think about it.”
F**k! I’m thinking about it.
Her lips slide until the bottom consumes the top--I think she’s hearing me. “I’m the one that got you into this mess, I’m going to make sure you get out of it. And if that chaps your ruffled ass, I’m okay with that, because right now, you need all the help you can get.” 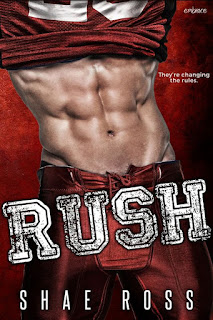 Priscilla Winslow has a mouth that spits fiery sarcasm faster than I can throw a touchdown. But I’ve wanted her ever since I saw her in that Bo Peep outfit on Halloween. Yep, I’m a sheep who will follow that little hottie anywhere. There’s one problem…she hates me. Just because we ended up in jail and quite possibly ruined both our futures...

College Quarterback Preston Rush is living the dream. He’s leading his team to the National Championship and days away from earning a ‘first round draft pick’ label. When he meets Little Bo Peep at a Halloween party, he thinks he’s scored big. Instead, he wakes up in a jail cell with the corseted beauty. Because of him, she’s in trouble and when he discovers her true identity, he realizes, his nightmare is just beginning.

The always shooting-for-perfection Priscilla Winslow can’t believe her good deed has cost her a soccer career. Even though she knows it isn’t Preston’s fault, she can’t forgive him for the disaster that is her life. She just wishes her damn body would get the message. Every time she sees him, it’s all she can do not to kiss him.
When everything crashes down around him, Preston will have to decide if doing the right thing is worth losing it all.

Shae Ross grew up in Ferndale, Michigan. She attended Michigan State University and continued her education at Detroit College of Law. Prior to 2014, she spent the majority of her career practicing corporate law and engaged in entrepreneurial ventures.

After having too many stressful days at the office, Shae began to pursue her dream of writing and signed a contract with Entangled Publishing. She loves strong heroines and sexy alpha heroes who deliver stories filled with sass, smarts and sizzle.